With Angi since August 2012 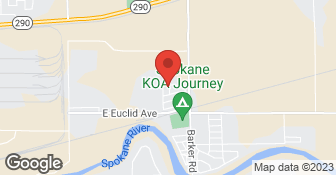 Circumference Concrete LLC is locally owned and operated business out of the Spokane, WA area and we feel invested in our clients and treat their property as if it were our own. I have over 43 years of experience with concrete services I specialize in all forms of concrete pouring and repair. If you have any questions don't hesitate to give me a call! Over the years we have never lost our commitment to our clients and that is what has allowed us to succeed in a very competitive industry. We won't leave until the job is done right! Call or click to schedule an estimate today  …

Five Star Plumbing is a service, repair, remodel, install, commercial service company. Collection is upon completion of job. We accept check, cash,Visa, Master Card, Discover and American Express. We provide billing options on some accounts. We have military and senior discounts.  …

The installation was completed as scheduled. They guaranteed the work for a year. We had a problem with a leak under the sink and they sent a crew out that day to fix it. We had the same problem again and again they sent a crew out the same day. They made an adjustment to the way the pipe coming from the garbage disposal connected to the pipe leading to the drain and we have had no problem since. ...

We had J&J plumbing install new natural gas lines to both our elevated patio and into our laundry room to behind where the dryer would go. The crew working the job was pleasant and kind but the end result is well below industry standard. Firstly, the job was scheduled for one day, which could not be completed. Understandable, that happens. The crew left and said they would return in the morning. N...

The two guys that came did a great job.

Description of Work
Delivery and installation of refrigerator.

Got a voicemail response from J&J the next day after getting their number from Home Depot as a sub-contractor. Called them back - only got voicemail. Left messages but no one called back and no one ever answered the phone - was always voicemail. Went with someone else.

They came out right away to check out the situation. When they saw that it was a power vent tank they said they'd have to get back to me. I heard nothing back. I called to follow up and mentioned maybe we'd be interested in going tankless. They sent out a guy to check out the tankless option and then never called back. I called. I went on their facebook page and sent a message to their customer se...

Description of Work
Our hot water heater went kaput. We asked J&J to replace the tank.

I have built 3 houses in the past, so am comfortable acting as a contractor. J & J was very responsive to my questions and input. They installed the tiniest sink in the world for me because of the small size of my one bathroom and used PVC piping. It was not aesthetically pleasing, so I did some research and informed Justin that we could do better. I ordered the metal parts, he had to remove some ...

Installed dishwasher and the door would open right. They said it was the dishwasher. Sears came and said no it was the install. Sears ended up fixing it and J&J never called me back.

I was concerned by the fact that they tapped into an existing power source, but I was told that it was okay since the range doesn't draw much current. When I asked if there was a way to make the cut out where the gas and electrical come up from the basement look better and more professional, I was told that it was code to leave open and not box it in like they do for new construction on washing ma...

Description of Work
The first trip they came to do the gas and electrical installation while waiting for the range to come in. They put in about five feet of gas flex line from a preexisting gas line in basement under stove and tapped into an existing power supply. Cut a large hole (about 10 inch wide by 8 inch high) in the wall behind the range to accommodate a place for the gas and electrical to come up inside the wall cavity so the range could be pushed back against the wall. So the outlet could be recessed in the wall, they cut one side of the electrical cover so it would fit. They had to screw a flat piece of metal that fits around the gas line into the floating tile we had. When I asked if this couldn't be screwed into the wall structure, they said that this is code so that if the stove ever hit it, it wouldn't damage the gas line. It sort of makes sense, but it doesn't allow for the laminate floating floor to move due to weather changes. A week later, they came and installed the stove. There was only one person to bring the heavy range into the house. He did a wonderful job considering he was working alone. When he was bringing the range into the kitchen, he damaged the stove stem where the knob attaches. It broke a plastic part on the stem. Fred's Appliance will fix it since it is under warranty, but I wonder if he would have said anything if I hadn't been there to see and point it out.

They did an install of a toilet from Lowes. They installed it on May 6th, as part of the install they caulked around the bottom of the toilet.. After 2 weeks the grout on the bathroom floor turned dark and water started seeping up between the tiles through the grout. They came back out and reinstalled the toilet. The next day it was leaking again so we turned off the water and they came out again....

From the time that I called to make the appointment to the time it took for the job to be done, only 24 hours had passed! They were quick, professional, and got the job done. Although the cost was slightly more than we'd anticipated, it wasn't a huge deal since it was the cost of the permit to do the work, as well as the added cost of using "hard pipes" outdoors rather than soft ones. As always, t...

Description of Work
J&J Plumbing came to the house and put a natural gas hookup on our deck so that we could use natural gas with our BBQ (rather than propane).