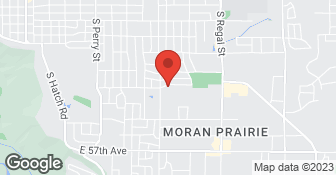 Handyman Solutions (of Spokane) was started in July of 2007 and is locally owned & operated. Specializing in residential & commercial repairs & remodels. We know we're only as good as our last job and nothing promotes our business better than word of mouth. Our business has grown from our clients telling their friends. Real Estate agents telling their clients & co-workers. From changing a door handle and patching a wall, to full kitchen and bath remodels. We pride ourselves on showing up on time for our scheduled appointments or at least calling if we're running behind. Call us today, you'll be glad you did....

Sole proprietor with over 22 years experience. We are a locally owned and operated company that values honesty and integrity and treats your home as if it were our own. We have many years of experience to give you confidence that we are your number one choice for your next home project. You will find us to be competitively priced with close attention to the details of each and every project that we are involved with. We look forward to building lasting relationships and guarantee your satisfaction!  …

We have provided high quality work and friendly customer service for years. Peter Waagenaar has been painting for over 30 years. He specializes in quality workmanship and stands behind the work he does. From Commercial to Residential, no job is too big or too small. We are committed to the complete satisfaction of our clients up to the smallest detail. We offer excellent work at competitive prices. Every house or building is canvas to us – what do you need painted that we can turn into art? Premier Painting Professionals offers exterior and interior painting, plus repainting services for both Residential and Commercial. We take pride in offering you only the best products for the best price. That is our guarantee! The interior of your home or business should reflect your personal character or brand. Premier Painting Professionals wants to make sure you the interior walls and trim are painted to reflect who you are. You can count on us to paint your home or business and leave it cleaner than when we began.  …

Horrible. Unfortunately, I can not recommend this business. Poor communication between employees and invoicing. Which resulted in way over priced job. Very misleading. We were charged a little over $735 for 4 small drywall fixes. If you use them, I HIGHLY recommend the owner come and give you a written estimate instead of picture and over the phone quote. We didn’t think we would be paying over $200 or so for these small fixes. Also, The employees were nice And respectable, and put our handrail back up for us for free, also did one more VERY small drywall patch (this we didn’t even notice until they left because it wasn’t mentioned to fix in the first place). When the owner found out, he said basically we should be grateful that wasn’t included in bill because the invoice would have gone up to over $1000 with tax. Anyone else I asked said we were very overcharged for the work done. The owner finally said he would “work with us” and we asked if he would take $600 instead- (giving us Only $135 off which wasn’t nearly enough anyway) he then asked if we could go ahead and pay the almost $40+ In taxes too. so we ended up getting our bill lowered only $100. Just not worth it. Communication is key. Over $600 is a rip off for 4 small dry patches-learn from us and Get a written statement before using this specific company!!!!

Thank you [Member Name Removed]. I agree, there was some miscommunication. When I gave you the price of $240 it was based on 1 patch you said you had in the bathroom. That's our average charge because it does take between 3-4 trips to complete. I came to find out after the job was complete, that there were 4 patches, not just the one. With that in mind. Instead of charging you by the patch, I charged you by the hour to save you money vs the patch rate. We spent 9 total hours at your house in 4 trips. As I explained to your husband, after he called about his concern with the price, that there was more than the 1 patch and that's why it was more expensive than $240. It was more cost effective to charge our hourly rate vs charging you by the patch in this situation, which would have been close to $1000. With that, your husband said it was still more than what he was expecting and asked if I would take $600. I said I would, and asked if he would be okay paying the tax on top of that. He said yes. There was nothing contentious in our conversation. I appreciate hearing that you had a good experience with our staff and that he took care of you.
5.0

The doors are all fixed now. All doors open and close properly, there's good weather stripping, and I no longer see daylight between the door and door frame!

Description of Work
The front and back doors needed adjusting and weather stripping. Also, a couple bedroom doors wouldn't close.

Thank you [Removed member name], I'm glad you're happy with our work and appreciate the review. Best of luck in Hawaii!
5.0

Thank you [Member name removed]. It's easy to do business with people you like. I appreciate the business and look forward to working on your bathroom in October.
5.0

I was satisfied with them. They are going to be doing another job for me this month. They were very meticulous, they always showed up when they said they were going to, and all the workers were very professional, and they did a great job. The cost was fair.

Description of Work
I used Handyman Solutions. They remodeled a bathroom.

They were really really good. I really like them. They were very nice. They explained every aspect that they were going through what they needed to do and how much it was going to cost. They did a lovely lovely job. They were exceptional. I would definitely use them again.

Description of Work
I used Handyman Solutions in December of last year. They did the drywall repair and plastering.

Mike was recommended to us by our real estate agent as someone who could fix just about any thing we needed to have done. He finished some projects that we just never got around to finishing ourselves such as putting up molding, fixing a section of kitchen flooring, and replacing a custom sized exterior door. We needed the job done quickly after we moved out of our home in order for us to be able to get it on the market. The work was done in a timely manner and everything looked just like I thought it should. We have already called him for a second small job since we moved into our new home. He is easy to work with is prompt in this return calls.

Description of Work
Made miscellaneous repairs to our house to get it ready to sell.

Thank you [member name removed], I appreciate the review.
5.0

Handyman Solutions gave me the best estimate in cleaning the gutter. He went up there and was finished in about half an hour. A lot of times you can't get him right away because he's booked for a day or two. He's dependable and good.

Description of Work
I used him for gutter cleaning.