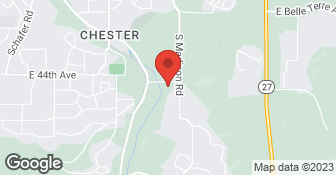 Not well they asked for a deposit which I gave them, from then on I was calling the company for a month to find out when they were going to start the project. It was one excuse after another and it was always blamed on the project manager. I was told I had been moved out for another three weeks, wen I asked why I was told I don't know thr project manager did that. The retaining wall was to have been gray wall with black top cap, I got a brown wall with black top cap's. They charged more than their estimate and I had to replace several of the bushes they had planted because they died.

Description of Work
New land scape on the side of the house.

Description of Work
called this company and requested a bid/quote to get my old sprinkler system up and running. They said someone would call me back.

Removal of old sod - performed with Bobcat - mediocre job, some sod grew back Design and blueprints - Haase was unable to layout the design according to design measurements and the rough layout was not symmetrical; they would have had to move the irrigation that was just installed and we decided to just straighten up the lines to avoid further delay. The finished design approximates the original design by the architect, but if you are looking for exact following of the blueprints, you may want to use another company Grading - some water still settles next to foundation wall - Haase returned once to fix it, but some of the original problem remains Drainage - underground pipe from downspouts cracked after six months - hired a different contractor and installed better pipes Irrigation upgrade - new timer works great, but irrigation ground box still has leaks in plumbing, water sprayed against foundation, when reported to Haase was told by employee on the phone that there would be a charge for them to fix this (even though Haase made some of the problem worse) Sod installation - very nice These problems were discussed with Haase. Haase came back one time to try and fix the drainage issue. Was told on the phone that we would be charged if they had to come back again. Further calls to company went unreturned.

Haase Landscape came out promptly. They charged me an arm and a leg for 2 hours of work. The bill was over $300! I argued with them for about 3 weeks, and got the bill reduced to $185. I was really shocked at the price. They didn't do the best job I have ever seen. Regarding the resolution of the bill, their professionalism was an F.

Description of Work
We used Haase Landscape for landscape services. They repaired a sprinkler valve that was broken.

They were unresponsive, didn't return calls often, didn't show up when they said they would, were late and did a poor quality job. On top of that they were expensive. We would not recommend them or use them again! I put the approximate year as 2009 but not sure of that and the cost I used also unsure of, just know for a fact that they were expensive!

Description of Work
We used this company to replace some grass that had been destroyed by the septic company when they put in a new septic tank. Haase was always late, and didn't show up on several occasions to complete the work. We had to constantly call them and complain and when the work was completed it was a poor job and they had to come back several times to tryi and fix it! To date the lawn they sprayed with seed to replace looks different and bad.

I have been using this company for a while now. They have been a good company to deal with. The project manager is always on top of everything. The crew is very professional and efficient. I appreciate how responsive they are to any situations. Overall, it has been a very positive experience.

Description of Work
I hired this company to trim shrubs and plants, removed dead plants, and pull weeds throughout the yard.

I would not recommend them. They didn't do a very effective job and when we talked to them about problems with the job they didn't follow through and correct them. This was a very large project and it took them several weeks to complete. The process they used on the flagstone has been virtually worthless and it didn't work at all. They never did the bridge and they stopped returning phone calls. We paid them quite a lot of money. We had to redo some of what they did. It was expensive for what we got.

Description of Work
We used Haase Landscape to build concrete block steps and they were not secure. They did extensive work on the flagstone on our property. They were supposed to do a bridge.

We are now in our third year using Haase Landscape for maintenance of our HOA green areas. They mow weekly and provide landscape care as needed throughout the year. The crews are professional and efficient. They do a good job cleaning up. The contract is spread out over the year so that we pay the same amount each month for their services. When special needs or requests come up, representative Tracy Schow is knowledgeable and helpful. When we've had service issues, Tracy is quick to respond and has always resolved things to our satisfaction. We obtained bids from multiple companies and have received unsolicited bids as well, but so far Haase offers the best price. We have also used Haase for snow removal. They were prompt and professional.

All things outside the home! Find Peace of mind under the Haase umbrella of service!

Haase Landscape Inc is currently rated 2.7 overall out of 5.

No, Haase Landscape Inc does not offer a senior discount.

Haase Landscape Inc offers the following services: All things outside the home! Find Peace of mind under the Haase umbrella of service!