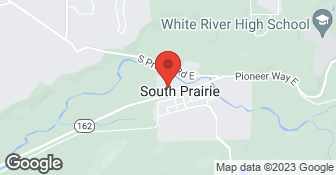 We are a small company with less than 5 employees. We try to handle all of our projects in house and only subcontract very trade specific jobs. By doing this our customers get to know us and trust that we are going to take care of their specific needs so the finished profects are exactly what they want....

I was referred to this company by my insurance agent at the time, when my roof had been leaking in my kitchen. The owner did show up and sent his crew to tarp the area the same day. At the time of our conversation he said the tarp would cost $300 which is something I was fine with. Since I am not a roofer I did not know that what they did was a horrible job. Other people who I received estimates from kept asking me why there was a multitude of huge nails all over my roof nailing the tarp down. Since I had already called him, I just decided to keep him as my contractor. He visited with my insurance adjusters, on 2 or 3 occasions. After my insurance company had settled on an amount, he went MIA my claims representative tried to reach him various times, as did I. I left voice mails, and after two weeks I realized that this was not a good situation. Over 6 months go by and I receive an invoice for an emergency tarp of $600 instead of the original $300 agreed upon. I also receive an invoice for the times he came to my house to speak to the adjuster. I understand that his time is money, although mine is too. I also did not like how the amount went up double, for the tarping of my house.

Description of Work
Placed tarp on my roof.

We are a family owned and operated Auburn based company, founded in 2012. We bring the highest level of care and craftsmanship to every project. We are your local experts for hardwood flooring, specializing in all types of hardwood floor services. Our specialties include installation, sanding, refinishing, stair work and much more. Customer satisfaction guaranteed! Call or click for a free quote today!  …

Pacific Windows LLC serves as one of the highest rated companies in the South Sound area. Our main job is making happy customers via excellence in window replacement and installation. Your windows are the most important barrier that protects you and your family from the Pacific Northwest weather. Let us perform the most important task on your home by beautifully upgrading your home! I'm Eugene and I would like to tell you about my company. I started doing siding and windows out of high school about 15 years ago. God gave me a gift to do everything with quality and integrity and that is the backbone of Pacific Windows LLC. With so many bad contractors out there, I found it a tremendous blessing to do things the right way. I absolutely love doing windows, but my main job is making happy customers. I love to see the joy in people when the home that they cherish was upgraded with the utmost care and respect. Outside of our personality traits, we are huge geeks when it comes to the construction industry. I spend most of my free time researching new products and learning new installation techniques. It would be my pleasure to offer my services to whoever is reading this page.  …

We are a full service General contractor. We perform remodels, as well as build new structures, including sheds, decks, fences, garages, and Barns.

How is ASB Design overall rated?

ASB Design is currently rated 2 overall out of 5.

What days are ASB Design open?

No, ASB Design does not offer a senior discount.

Are warranties offered by ASB Design?

No, ASB Design does not offer warranties.

What services does ASB Design offer?

ASB Design offers the following services: We are a full service General contractor. We perform remodels, as well as build new structures, including sheds, decks, fences, garages, and Barns.