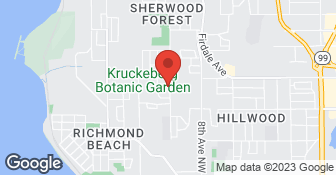 Evergreen Window Cleaning is a family-owned and operated business. We enjoy providing our clients with quality workmanship at competitive prices. We are committed to offering knowledgeable and friendly service as we care for our customers' homes....

Pro showed up in time, explained what he was doing, work was done in about two hours. Real nice guy and reasonable prices.

An excellent job on the windows, very professional and charged less than the competition. The one thing I would like them to also do is wipe the window frames. Overall I was very satisfied.

Description of Work
Window cleaning inside and out.

Generally very well; they were punctual and professional. There was a glitch, in that someone forgot to pass on the message that the gutters were supposed to be washed, and I didn't catch it until after the windows had been washed. Thus the gutter washing was somewhat less than ideal since they didn't want to mess up the clean windows.

Description of Work
Windows washed inside and out, gutters cleaned and washed

They are very capable, thorough, courteous and friendly, I would recommend them and use them, again.

Description of Work
Cleaning gutters and windows -- inside and out

They did excellent work, I will use them again.

Description of Work
They cleaned our 20 windows

They are very good at comminication and they show up on time if there is an appointment. They are very accommodating and they always give us a discount for using Angie's list. They do a magnificent job. Our windows, driveway and the deck look brand new. Their office staff and the people who come out to do the job are great. When they give you an estimate, that is the final price. If there is any change, they would come and talk to use before they could do any work. It is a really good company.

Description of Work
They did window cleaning and pressure washed our deck and our driveway. Pressure washing the driveway cost us 300$.

Second year in a row I've used their service, will continue using them and highly recommend this company, AAAA+

Description of Work
Washed windows, inside and out.

It went well. They did a good job and thorough clean up.

Description of Work
Cleaned gutters, cleaned and treated roof. Washed all windows inside and out.

I was very happy with the professional service provided from the estimate to the completed job well done.

Description of Work
cleaned my second floor windows inside and out.

With our new house we don't require as regular maintenance for gutters and moss removal. I'm very much on the fence whether I'd use them again.

Description of Work
I have mixed feelings. We worked with these guys back in the day when Kreg K owned the company. When we moved back to Washington, I had them do gutter cleaning and moss removal. A lot of mixed communication. I wanted the moss off our roof removed. They killed it, but didn't remove it, and then wanted more $$$ to come back and remove it.

Thank you for your feedback! Our miscommunication with you last year led us to revamp our Roof Care communication. Since last November we now have customers choose one of the following three options (now found on the Roof Care section on our web page ([hyperlink removed]): Option A: Moss Treatment. While this option will not get rid of old dead moss, it is definitely easiest on your roof and budget. We air-blow the roof of any loose debris and apply the treatment (usually zinc sulfate monohydrate, powdered or sprayed, depending on roof type and weather). If your roof has very thin moss or is just beginning to green, this is the way to go. Here in the northwest, we generally recommend doing this annually or every other year, depending on the amount of sun your roof gets. Please note: If you want us to remove any moss, this is not the option for you. Option B: Brush & Treat. First, we brush the moss off your roof. Then we air-blow and treat the roof (see description in Option A) to kill off any moss left behind (there will be some). Though this won’t leave the roof quite as clean as Option C, it is often a very close second, requires no water, and can be less expensive. Option C: Wash & Treat. To get your roof looking as new as possible, a roof wash may be the way to go. We begin by blowing off the roof (composition, aluminum, and many types of tile) and cleaning out the gutters if needed. We then spray an outdoor cleaner to loosen the moss and wash the whole roof with a low-pressure, high-volume pressure-washer. After clearing out the gutters and downspouts (again), we rinse any debris that might have splashed onto your siding, clean up the ground, and treat the roof to prevent moss from growing right back. So far, since we made the change, we have had no complaints about miscommunication in regard to roof cleaning. Thank you again for your contribution to our better clarity. Best regards, Keith Sherman
5.0

Description of Work
Windows, gutters, clean the roof and put a moth protection on.

Overall, pretty good. Nice people. 100% perfect....is not easy on our home. But as close as humanly possible on a 3 story house. Missed a section of the outside of the window on the third floor which was hidden by the interior vertical blinds which were open. I know they would have come out and fixed it, but I couldn't see worrying about it just for that one little thing. We can get it next time...and there WILL be a next time. We're very happy with the service.

Description of Work
Washed house windows inside and out and glass deck railing windows.

Thank you for choosing us!
5.0

They took excellent care of our deck. They did a fine job on the deck and annually checked our deck. But i do not know why they have not come out this summer. They have high quality service. In the past they were responsive and punctual but this time i do not know what is happening but they are professional. Their price is reasonable.

Description of Work
They did our deck.

Thank you for the A-rating, but I'm afraid this one doesn't belong to us. As you may know, the owners of Evergreen Window Cleaning & Wood Restoration sold the window cleaning side of the business to us (along with gutter cleaning, pressure washing, and roof care). Now we are Evergreen Window Cleaning & Home Maintenance while they are simply Evergreen Wood Restoration. I have tried to get Angie's List to remove the Deck Maintenance category from our profile, but they told me it can't be removed because it was part of the original company. So I know it's a little confusing. Can you contact AL and have them put this review with EWR? Also, you can reach EWR at 425-467-7090 and let them know too! Best Regards, Keith Sheman
5.0

I was happy with them. They were just fine. Their responsiveness was excellent.

Description of Work
They did window cleaning.

Compared to some other people that I have used for window cleaning, they were just way too expensive. To do windows and to clean the powder off the roof, it was like up to $700 and the guy asked for a tip. I would not use them again. The guy that owns the company is very professional, but he does not come out anymore. He has hired people. I am sure if he would find out that his hired person asked for a tip, I think he would have been livid. As far as their work goes, they are average like anybody else, but they are just too expensive. The owner and his wife are very responsive over the telephone or e-mail. They are above average with their punctuality. Their professionalism is average. It is the hired help and not the guy who owns the business.

Description of Work
Evergreen Window Cleaning & Home Maintenance cleaned the windows and cleaned the powder off the roof.

Things were good. I decided to go with them because they were recommended by a real estate agent. They are pretty thorough and fast.

Thanks, (member name). I'm glad you gave us the opportunity to serve you!
5.0

Description of Work
They cleaned my gutters and my roof.

It was good. We like it. We used them and will continue to use them. They did a good job, courteous, prompt, did what they promise.

They were wonderful. They were efficient and professional. I had never used them before.The price was reasonable.

Description of Work
We used Evergreen Window Cleaning & Home Maintenance to clean the gutters of a house that I sold.

Description of Work
Evergreen cleaned the inside and outside of all windows in the house, the skylights and also pressure washed the roof!!! I called and they set up an appointment for the next week. They worked with me regarding the appointment and worked around graduating from Grad school, work, and moving out of the state - they were amazing!!!

I have worked with Evergreen for many years now. Simply put I wont work with anyone else.

Arrived on time. Service was professional. Washed all windows both inside and out along with a skylight. very pleased and will use them again.

Description of Work
Washed all windows and skylight

Evergreen arrived on time and finished quickly. Was very professional and cleaned up everything when done.

Description of Work
Cleaned interior and exterior of gutters

Everything turned out well. They had excellent follow up and customer service, did a great job, and charged a fair price for the work.

Description of Work
They cleaned the interiors and exteriors of the windows at my new house as well as their screens. They've also cleaned the gutters and the roof at my mother's house.

No employees, I'm the owner so when you need the work to be done right I'm the one responsible for the job, I provide free estimates with no rush, no push. I accept check or cash I do also subcontracting jobs.  …

Telephone quotes are provided free based on customer descriptions. Workers will verify price and get customer approval before starting work. All workers are covered by Workers Compensation. Payment is expected upon completion of work and can be made by check, cash, Visa, Mastercard or American Express.  …

No, Evergreen Window Cleaning & Home Maintenance does not offer a senior discount.

Are there any services Evergreen Window Cleaning & Home Maintenance does not offer?