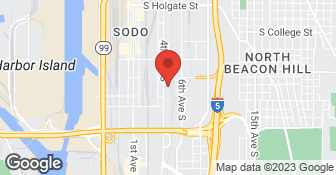 Stop Bugging Me Pest Control is a locally owned and operated service company located in Seattle WA. We offer guaranteed pest control solutions for residential and commercial customers in the greater Puget Sound. At Stop Bugging Me we take an integrated management approach to pest control pulling from years of training and expertise to address your specific issues. Our staff will take your call and work with you to first identify the problem. We will then ask specific questions about your situation and give you a quote based on the information you provide and the square footage of your home. When the technician arrives, he will discuss strategies and follow our exclusive programs to eliminate the problem and leave you with useful recommendations for future control....

30% off - Interior and Exterior Ant Control…

26% off - Interior and Exterior Rodent Service…

Extremely well!! Henry from Stop Bugging me was very knowledge and experienced in termites. He was the 3rd Termite expert I had had since I first saw a few black antlike insects on my desk which I had photographed. I had been stressed since then and hadn’t got any resolution from other pest control companies who came to inspect but missed actual termite damage that Henry found. Henry was pleasant and respectful of my home and took the time to explain to me about termites and how the ones I had sighted may have got in from my neighbor’s home since no other termites were around since. He asked me a few questions about my first sightings and the pictures I had taken of these destructive bugs. Henry patiently inspected the interiors as well as the exteriors of my home educating me on termites. He found damaged wooden panels in the attic and the crawl space by termites which may have been in the past absence of any current activity. Both the attic and the crawl space wood damage were minimal, and I was advised to replace the damaged section which didn’t threaten the structure of my home. I found him very honest, who didn’t try to impose or sell me expensive termite treatment which other inspectors recommended without termite damage findings. Henry was like going to a doctor who diagnosed my health correctly and advised me for preventive solution. I will definitely recommend Henry to those homeowners who are worried about termite infestation.

No work done, just witnessed vehicle driving very erratically on I-5. Very dangerous, almost caused 3 accidents before speeding off out of vision. If this is how they drive, imagine the carelessness they'll do in your home. Beware, very irresponsible

Description of Work
None at this time

Someone came by, they claimed they waited 45 minutes, but my tenants said by the time they went to the door, they had already left. The technician claimed to have called me, but I had no missed calls (he later called me and it worked just fine, so I don't get this part). I got on the phone and asked the guy to come back, he did, told my tenant nothing could be done because the area where animals could get in would let squirrels steal any bait he laid out. He didn't lay any traps or do anything to block off the area where animals were getting in. The place he observed was an easily seen external area--he didn't spend a bunch of time looking around or getting into uncomfortable spots, or putting down any traps or bait. He did nothing. Got the invoice. 390$ and I'll have to reschedule another trip with an additional charge if I want anything done. This is basically robbery, but I guess they can hide behind the idea that showing up and giving their expertise is worth all of that. The expertise in this case is 'go to home depot, get some mesh, and cover these openings over your garage before anything else happens'. You can save a lot of money with these guys by wandering around your own house, saying you don't see any rats for free, and then doing nothing!

Description of Work
Had reports of rats in the space between the floor and ceiling of the basement by a tenant.

Great! She was on time and thorough AND no more wasps.

Called me the very next day after I asked for a quote through Angie's List. Two other companies I requested a quote from never responded. The appointment scheduler was friendly and helpful, and was able to set up a technician to come out in just a couple of days. The technician (Cody) was on-time, professional, explained everything before, during and after the treatment, and answered all of our question. He was very helpful and friendly. Have now set up a bi-monthly maintenance program with Stop Bugging Me.

Description of Work
Initial treatment for ants and spiders.

They were good. They were professional.

Description of Work
They sprayed and put traps for the rats.

Ants kept coming back even after every treatments. When I called they'd send someone out to respray a few days later but often by then ants would disappear again. They kept sending me this rude worker and I didn't feel all that safe or confident with him around my house. He ended up giving me ant baits to try. Ant bait did work but over time basically I ended up doing all the work while I'm paying them my monthly fees for spraying that didn't seem to work. So I cancelled the service.

How is Stop Bugging Me Pest Control overall rated?

Stop Bugging Me Pest Control is currently rated 4.7 overall out of 5.

What days are Stop Bugging Me Pest Control open?

What payment options does Stop Bugging Me Pest Control provide

No, Stop Bugging Me Pest Control does not offer free project estimates.

No, Stop Bugging Me Pest Control does not offer eco-friendly accreditations.

Does Stop Bugging Me Pest Control offer a senior discount?

Are warranties offered by Stop Bugging Me Pest Control?

What services does Stop Bugging Me Pest Control offer?