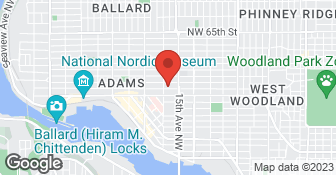 Full Bore specializes in Trenchless Technology, with a focus on water and sewer line replacement and repair. We can replace your water line without digging a trench in your yard. Our workers are highly trained in both boring to install your line, and in preserving your landscape while we work. We maintain the same high standard of workmanship for all services we offer....

Cesar and his team did an amazing job. They were very timely with responding to the request for a bid, providing the bid, and then getting the work completed once we had the funding secured. They were the most affordable bid and the most communicative. We were very pleased with the work once performed, especially considering that the job was more of a challenge once they started on it, but they still didn't charge us extra. This is not a fun way to spend money, but I was very pleased with the quality of the work and the customer service and actually excited about my new sewer line.

The Owner Cesar, takes CASH, LIES he never took money, threatens to sue me, put lien on the property, harasses with phone calls using abusive language. CHEATERS. He performed inspection and gave a quote for complete material and work for replacement of Water main. However he gave his estimates for smaller pipe size compared what is already there which is clearly his mistake. What was he doing while inspecting and giving the quote? Work is NOT done on time, Workers looks like inexperienced, struggled a lot, Boring not done right. NO coordination with residents, not properly closed the pits dug on the site. On top of that he demands $500 more for matching the pipe size with what is already there. He demanded cash and got paid in full the next day after completing the work. I have all the evidence for paying the CASH. He than start harassing by making phone calls with abusing language to pay an additional extra $500. He also now claims that he never got paid a penny and he is going to sue me for the FULL payment. Such a moral less, unprofessional, cheaters.

I used Full Bore to replace my galvanized main waterline with a new pex main line. The estimator was able to come to my house the same day I called and took perhaps 20 minutes to walk the property, identify where the existing line was and propose how they would replace it using their trenchless boring solution. He provided a verbal quote and followed up with a written quote via email the next day. I was coordinating other plumbing work at the time and didn't get back to the estimator until the weekend. He was checking his email over the weekend and was able to confirm they could start work in two days. Once the team was onsite they got to work immediately and were able to replace the water line in less than 3 hours with the water only being turned off for about 15 minutes. They left certain areas of the piping exposed and coordinated inspection from the city for the next day which was passed without issue. The team returned the next day to fill in the small holes leaving very little sign of the work that had been done. I would happily work with them again and likely will when I replace my sewer line.

We had a repaired outside water line that failed. Therefore, we decided to have the entire line replaced. There are many options, techniques, and providers. We decided to go with trenchless boring and a company that specializes in boring rather than a plumbing company. This turned out to be an excellent decision. Not only did Cesar provide a not-to-exceed bid but he also had his team on our property the next day. The team returned water service to us the same day. After passing inspection, they filled and patched the holes at the end of the service promptly. Finally, clean up was excellent. While losing water was painful, dealing with Full Bore and Cesar was straightforward and pleasant.

For the most part all went well; however, there was a significant delay as a part for the equipment was left at there shop. It took several hours before the part was in place so the sewer line could be placed.

Description of Work
Trenchless water line installed. Could schedule in two days. Efficient, on time arrival, and everything put back. Could hardly tell they were here.

Description of Work
They fixed a broken main line pipe under our driveway at a rental property.

Was a pressure fix your problem with new water devices Thank you for the excellent reviews [Member Name Removed]
5.0

Called a big name plumber to help out when I found out I had a leak in the water line between the meter and my house. That company quoted me 7000 - 8000 to repair the proble. I later found out that that company just calls Full Bore and sublets the job to them. So I called Full Bore directly and saved 6-7k! The crew showed up on time, was courteous, and helpful. I would absolutely recommend this company to a friend in need.

Description of Work
Bored and sleeved for a new water line install from my water meter to my house.

Hi Mr. [Member Name Removed], Thank you so much for your review we happy to work with you

Jafco Sewer Repair is a Local, Family Owned, Plumbing, Drain Cleaning and Sewer Repair Company. We believe that our Superior Customer Service along with our Best Price Guarantee set us apart. Emergencies can happen at any time, that's why we have Crews Available 24/7 to meet your needs. Some of our Services include: Service Plumbing, Hot Water Tanks, Tankless Hot Water Heaters, Drain Cleaning, Sewer Lining, Pipe Bursting, Main Waterline Repair, Sewer Repair and Replacement, Septic to Sewer Conversions, Camera Inspections, Rooter Services and More! We are a Licensed/Bonded Registered Side Sewer Contractor Servicing the Greater Seattle Area. Give us a Call Today to get your Free Estimate!  …

Full Bore Inc is currently rated 4.6 overall out of 5.

No, Full Bore Inc does not offer eco-friendly accreditations.

No, Full Bore Inc does not offer a senior discount.