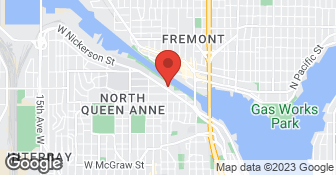 DP Palmer Painting & Restoration has been proudly offering design, restoration, and painting services in Seattle, Bellevue and Renton areas for many years. Our priority is the satisfaction of our clients, so we always take the time to ensure you are satisfied with the design of your space before starting any work. Our licensed, insured, and bonded painters and designers have years of experience in small and large painting projects in Seattle. They enjoy working closely with clients to ensure each project is perfect down to the last detail. When hiring DP Palmer Painting & Restoration for your interior and exterior painting, wall restoration and commercial design area painting needs, we ensure that the experience is completely hassle-free. We will personally empty the spaces to be painted with the utmost care, packaging fragile objects and doing all of the heavy lifting for you. You can rest assured that your floors and carpets will be well protected and that our professional painters will work diligently to ensure the quality of their work. We will never rush a residential or commercial painting job. We will use top quality paint and tools to complete the contract to your specifications. We will never leave any tools, stains or materials behind that you must clean up. We will always stand behind our work and satisfaction is 100% guaranteed. Additional contact name - Suzanne Hinton. Additional email - larrylawrencepal@gmail.com.  …

STAY AWAY from this company and in particular the Western Spokane Branch ran by a man named Dylan. They are extremely unprofessional they will show up late daily, won't paint all the spots, won't use proper safety equipment, and will absolutely miss a thousand spots on the trim. On top of all this they even painted my garage the wrong color and had to re do it all over literally doubling the amount of time needed from two days to four days.

They were VERY sloppy. They dripped paint on sidewalks, and on the bricks on the different colors. They did not show up on time each day, and often left the job early. They missed many, many spots that had to be repainted. There are places they never did paint completely. Again, very sloppy unprofessional work.

He called and said he'd start work June 14th and 15th, for paint removal on a house we use as a rental, a nice home on Asbury St in Moscow. Then he called me today June 15th, 2018 to tell me that his bid was a bad bid. He had been informed in March that the job involved lead paint, but he said that he'd only bid out two lead paint jobs this year, and that his first lead paint job had been been a difficult one, his workers were unhappy and he'd lost money on the job. This quote was for preparation (washing and scraping prep work) only, as we wanted to do the painting ourselves. He quoted $1,250. for prep work on the small two bedroom house, single story, but now said that he'd need an extra one thousand dollars to do the job. He was willing to refund me the money I'd put down already... and set a time to do that, but he would not honor his signed contract. Now I am facing finding someone else who actually has more professional experience and will keep their word. Mind you he was courteous, just didn't come through when promised even with a signed contract and money down.

A representative of College Pro Painters set a date and time for them to come to give me the estimate. I was there at the arranged time, but no one showed up and no one called. I considered this to demonstrate their unreliability and did not call to schedule again.

Description of Work
I asked for an estimate on painting a part of my house.

They are a nationwide organization. They hire College in the summer, all train them, and they collapsed of painting. I will not recommend them. They over straight the brochures and stuff like that. We have them bid it to do less than a fault job on a trim. They have like the storm taken off. They were not they highest and lowest bidder.

They did a good job. The job was excellent. I had bids on it, and they were a little high, but they could do it when I wanted it.

Description of Work
I used College Pro Painters. They painted my house.

No follow up contact. Concerned that the verbally quoted price was done on the fly and was too good to be true.

Description of Work
Estimator spent no more than 10 minutes on Saturday and gave a quote of $3,000 to paint the exterior of my two story 2,600 sq.ft. house and promised that a written quote would be mailed on Sunday. Nothing has been received as of the end of the day Thursday.

The representative was polite and punctual, but just couldn't provide any references. The bid, at $6000, was higher than what I have contracted for with a professional who did my neighbors house.

Description of Work
Received an estimate

College Pro Painters was supposed to show up three times and didn't and we were not getting straight answers out of them over the phone. He finally subcontracted the work to Angel Ramos. The price I paid was higher than the orginal estimate as we were told that we would have to pay extra for a job well done. Next time, I will cut out College Pro and go right to Angel Ramos.

Description of Work
College Pro Painters finally subcontracted the work to Angel Ramos and his nephews to paint the exterior of our house. They also did all of the trimming, gutters and windows in a period of three days.

Matt Bingham, who was the contact person, was very polite. He gave us an estimate and he kept his word on that. They had another contractor come in shortly after they were done and they had to work overtime. The stain looks fabulous. One crew person quit half way during the job and they still got it done on time.

Description of Work
I had my house trimmed and painted by them. They also re-stained the cedar shake on my two story home.