With Angi since February 2007 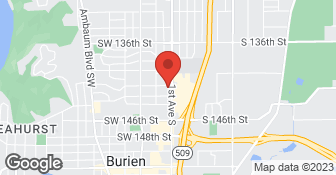 Description of Work
Made cushions for my boat

Description of Work
They repaired a boat top I brought in. very well done and reasonable

Description of Work
The company does not pick up nor deliver. However, the owners went out of their way to facilitate the loading and unloading of the truck being used to haul two awkward (and thus made heavier than their actual weight) barrel chairs. | |The chairs were sturdily constructed, but had over a period of nearly 20 years, become threadbare in places. Burien upholdstery, using digital jpgs transmitted via email, were able to provide a host of color and fabric choices. | |At first terse and business-like, the owner and people we dealt with soon became like life-long friends. The work performed appears to be such that it will abide with us for the rest of our lives. We are very pleased with the results and take pride in having taken many bids before committing to Burien Upholstery--and having gotten the best bang for the buck. |

It went wonderful. They are just helpful and nice.

Description of Work
They did boat top repair.

Burien Upholstery has been very easy to work with. They did the work in a timely manner at a reasonable price and the result looks great! They have been really good about making sure our booths are ready to be sat on for when the bar opens at 4 pm. We will definitely be using Burien Upholstery in the future and highly suggest them for your upholstery needs.

After a very rainy fall, I noticed the front and back carpet on the passenger side of my 2002 Mitsubishi Gallant was soaking wet. I brought it into the dealer and they had no idea about the cause and said they wouldn't be able to take it in for repairs until the following week. I needed to get it fixed sooner as I was leaving town so I called around locally and finally was referred to Burien Upholstery. They agreed to take it that day and estimated the cost at $200. They called me 2 hours later and said they'd looked at the most obvious to least obvious causes and finally found the leak through the fender. Therefore the price would be $300 because they'd have to remove the fender. I gave them my OK and picked up the car the next day. They did a marvelous job and were extremely professional and friendly. I would definitely recommend them.

Description of Work
They diagnosed a water leak in the interior of my car by removing and replacing the passenger seat, glove box, trim, fender skirt, rear seat and carpet. They finally found the leak through the passenger-side fender, sealed the seam, vacuumed the water out of the carpet, replaced the carpet pad and put everything back together.

We are a family owned and operated company with a unique 24/7 approach to customer service. Our state of the art paint booth allows us to be at the highest industry standard and also environmentally friendly. 37 years in the business means we have the knowledge to make your repair process completely painless. No repair is too big or small for us.  …

How is Burien Upholstery overall rated?

Burien Upholstery is currently rated 5 overall out of 5.

No, Burien Upholstery does not offer eco-friendly accreditations.