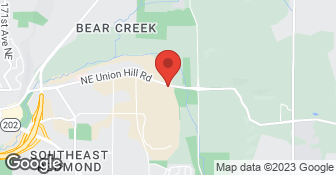 Great! They came out promptly to quote. Explained everything. Competitive bid. Work started as planned, excellent communication. No pricing surprises. Showed up when they said they would. Felt like very personal attention, that they care and will stand behind their work as promised. Great to work with. Very happy with their work. I recommend them highly.

It was quite good. We do not have any problems with the roof that they did. At that time the roof was expensive.

Description of Work
They put in the roof.

I had a small roof leak, a couple of water stains on the ceiling in one of the rooms on the second floor. I live in a pretty standard 2-stories house. Contacted B&J Roofing, they sent a man to do estimate. He came, took a look, several days later he sent me a contract. The price was pretty reasonable, I signed the contract the same day and emailed it back. I was told that they will contact me later to schedule an appointment to fix the leak. So far so good. I waited one week, no one called me back. I sent an email inquiring about the appointment – got no reply. I waited another week, then called the person who did the estimation, he sounded surprised, didn’t remember me, I told him my name, he said that he will try to find my contract. He called me back and said that he couldn’t find my contract. I sent it to him again. He called later that day and said that their crew will come Friday morning this week. I was a bit surprised but I was thinking that it’s not a big deal – they lost my contract, that happens. I was waiting for the crew on Friday morning, it was 12.30pm and no one showed up. I thought that maybe I misunderstood and it’s not Friday morning this week but Friday morning the next week, I called again to double check, and was told that the crew is coming within an hour. So, they were supposed to come in the morning, they were behind the schedule and no one bothered to call me to notify about that – not a great attitude towards your customers. The crew came, went on the roof, did some stuff there, I was sitting at home and at one moment I saw that their car is driving away. I thought maybe they forgot some tools or materials or went to get some food, but they never came back. So, they did some work, never told me what exactly they found there, what they fixed, didn’t even say “good bye” to me and left. I was thinking that maybe they will send me a detailed report via email later, but 4 days later I received only an invoice. My astonishment grew up with each interaction! I told them that I will pay only when someone will tell me what work was done. 3 days had passed – no reply. I sent another email. Finally, I received an email with pictures and explanations, and then I paid the full price from the invoice. I very rarely write any reviews, so I didn’t intend to write anything even after that not very pleasant experience, but last weekend I went up on my roof to clean gutters and I found about 40 old rusty nails lying on the roof by the place that they fixed. This was the final straw. The crew didn’t even bother to clean after themselves. I would never recommend this company to anyone.

We selected this company based on other positive reviews and were completely satisfied with our experience with them. We would hire them again.

Description of Work
Rain has been coming into several areas during storms. They identified the problem areas and showed them to us on cellphone pictures and performed the corrective work.

They were very professional and polite in their explanation that they don't do the kind of skylight we need replaced. We need a roof ridgeline skylight replaced and they recommended another company who could do the work for us.

Description of Work
Replace a skylight.

Brian was very impressive with his work ethic and very professional.

Description of Work
Brian Hart came out to my house last fall and fixed the shingles on my roof. And then came back and replaced all the loose shingles.

I got several bids for a new roof. In the end I decided to go with B and J Roofing. The overall experience was excellent. From the very beginning, the customer service and responsiveness was great. Brian and team were able to clearly communicate what they would do. I had a few specific requests, and these were taken care as I expected. We had been told it would take several weeks to start, but then we were scheduled sooner, and the job was completed in 2 -1/2 days. That was a nice surprise. After the job was completed, we had a couple of items that needed attention, and this was taken care of the next day. I would not hesitate to call on them for another job in the future.

They have an amazing customer service. They were punctual all the time.

Description of Work
For roofing, I used B & J Roofing.

B&J workers showed-up on the scheduled date and time and continued to work on the job was completed. All of the workers were pleasant and conducted themselves in a professional manner. At the end of each day, they cleaned-up the work site and the lead worker gave me a status report on the job and answered any questions I had. I contacted B & J twice after the job completed to address some minor issues. Each time they immediately scheduled a visit by one or more of its staff to address the issues and ensured my concerns were resolved. B & J's customer service was truly outstanding. I feel very fortunate to have found a contractor that was able to take the lead in coordinating its work with the others involved in my project, dedicated to ensuring its work was done properly, and willing to assist me in my attempt to file a warrantee claim.

Description of Work
Removed one layer of existing roofing from the house and detached garage and installed new dimensional roofing material (including edge and gutter metal, ice and water shield, underlayment, flashing, damper vents, ridge vent and smooth surface torchdown in one area). Prior to the re-roofing, they removed/replaced two shingles on the old roof so I could pursue a warrantee claim on the failed roofing material. B & J also coordinated its work with the people replacing the stucco on my two dormers.

ANGIE'S LIST SUPER SERVICE AWARDS: 2009, 2010, 2011, 2012, 2013, 2014, 2015, 2016, 2017, 2018 As one of the oldest residential re-roofing contractors in the Seattle area, we guarantee you quality workmanship and exceptional service. We specialize in re-roofing with composition shingles, cedar shakes, single-ply systems for low pitch roofs, metal, and various types of tile. No matter what type or size of roof you have, as a valued client, your job is equally important to us. Whether it's a 1,000-square condominium project or a 5 square carport, you can expect the same excellent service LICENSE #: STOUTRL894D1.  …

We are a family run full service roofing company serving the greater Puget Sound with pride and integrity. We have more than 12 years experience and we provide top quality roofing solutions year round. With an emphasis on organization, communication, and quality we offer the best roofing experience in the industry and back our work with the strongest warranty available. Call or message today for a free estimate. We return all inquiries within 24 hours.  …

How is B & J ROOFING INC overall rated?

What days are B & J ROOFING INC open?

What payment options does B & J ROOFING INC provide

Does B & J ROOFING INC offer a senior discount?

No, B & J ROOFING INC does not offer a senior discount.

Are warranties offered by B & J ROOFING INC?

What services does B & J ROOFING INC offer?

Are there any services B & J ROOFING INC does not offer?