Homebuilders
Sunrooms and Patio Enclosures
Exterior Painting
Wallpaper
Licensing
All statements concerning insurance, licenses, and bonds are informational only, and are self-reported. Since insurance, licenses and bonds can expire and can be cancelled, homeowners should always check such information for themselves. To find more licensing information for your state, visit our Find Licensing Requirements page.
Business Details 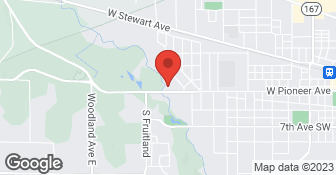 We are a local company that provides residential and commercial exterior and interior painting services. We have professional teams and utilize quality paint products from Sherwin Williams, Benjamin Moore & Behr. We are part of the Dwyer Group Franchise family that includes Mr. Handyman, Molly Maids, Glass Doctor, Rainbow Restoration, Mr. Electric, Grounds Guys, Mr. Appliance, Mr. Rooter, and AirServ. You can schedule an appointment online by going to our website fivestarpainting.com/federal-way.

Now serving the Austin and Seattle metropolitan areas! Brush N' Roll Painting Co LLC. is a family owned and operated business specializing in interior and exterior painting. We pride ourselves in the workmanship, professionalism, and integrity of our painters.

DESCRIPTION OF WORK
We've been trying to get bids for a pretty large project -- work in our yard (outdoor living spaces, porch, etc) and while Zetterberg did provide a bid, it took a very long time, reminders and so forth. The bid ended up being a number that they said was very ballpark, and they couldn't say whether it was even close. We were looking for three line items, and they had initially told us they could do that. We wanted a line item for each of three areas in our yard. We had plans for the structures from an architect. They built the home of friends of ours, and we also contacted them at the home show, then further contacted them through email, phone and at our home to take a look at the site. Because it is a decent sized job--at least by our standards, it will probably end up around $35K total--we are disappointed that the responsiveness was low. We'd need to know that a company is enthusiastic, wants the business, and is strong on follow-through. While I'd like to say that it is probably small for Zetterberg, they never said that it was. It would have been more helpful if they told us upfront this wasn't in their wheel house, if indeed that were the case. We are not sure what is the issue--we are not mean or strange people, we have a very nice custom home, and the companies we had at the top of our list are not interested in the work it seems.

Absolutely excellent, couldn't be better. Not the cheapest, but if you want a great job, done right, this is your company

.He coordinated all the sub contractors for the work we needed done. He stayed on top of everything to make sure we were on time. They quality of the work he got for us was top notch. They were very professional. I will use them gain if I need that kind of work done again.

DESCRIPTION OF WORK
.I used Zetterberg Quality Homes Inc. for the general contracting work we had done.