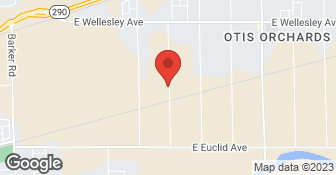 General Contractor, 2 employees, we sub out electrical, plumbing, and hvac due to local codes.

Description of Work
Did not return my call or reply to my message. Wasted my time.

Description of Work
Both companies that I spoke with set up appointments and didn't show up. Asked for my membership dues back. Was ignored by you. Want no part of your company. Do us both a favor and don't contact me again. You are a fake and a fraud.

Work went fine. Ed wasnt able to get the two exterior doors adjusted more (they look like they were sagging in the jam orignally), and the front door actually looked a little and quot;worseand quot; than it did before the adjustment. Thermostat replacement and closet door adjustment went great. The bathroom faucet needed new parts to stop the leak. While Ed was working on other stuff, I went and got replacement parts (universal fit per Ace Hardware), only to have Ed work on faucet for over 1/2 hour and still not be able to stop the leak. Ed said I needed to get geuine Moen parts and then showed me how to reinstall them myself. Ed also said that if I had trouble getting the facuet back to gether to give him a call and he would drop by and do it because it would be only a and quot;5 minuteand quot; deal. Ed spend 2 hours at my house and charged me $10 less than his actual 2 hours I owed him. I assumed that was because he could actually fix the facuet. After he left I got the Moen parts, but was unable to get it back together myself. I tried to call Ed several times and left messages to have him call and come by to help me. (This was the Friday before Labor Day, so I assume to was out of town). I couldnt use the faucet for the long weekend, which was fine, however, when Ed did call me back and and quot;stop by on Tuesday morning (1/2 hour later than he said he would be here), he charged me $35.00 for the 10 minutes he was here. I was not expecting if free, but I didnt think I should be stuck for a full hours labor (If I new that, I would have found another 50 minutes of work for him to do, so I got 1 hours work for 1 hours pay. Ed did a good job and was very nice and didnt waste time when he was here working. I would recommend him, but be clear that both parties know what is expected and the cost of it.

Description of Work
Tried to fix door gaps, where daylites was showing thru around jam, adjusted door handle on closet door so that door would stay closed, repair leaking bathroom facuet, replace old thermostat with a new programmable one.

We like him a lot. We will get some more work for him as soon as the weather clears. He and his son does excellent work.

Description of Work
I used Ed's Handyman Service to do my walls, do some painting, and install a door.

Ed is very meticulous and went above and beyond of what I originally requested him to do. He fixed some of the things that could have potentially been a hazard to me later at no extra charge. He was very concerned about my safety. He was very trustworthy and did quality work. He cleaned up his mess and took everything with him.

Description of Work
I have used Ed's Handyman Service. He replaced a garage door opener for me and then he put in a whole new garage door.

My experience with him was very good, and I would consider using him in the future.

Description of Work
I used him for routine handyman services, he did a lot of miscellaneous things for me.

Thank you for your report, we appreciate your comments.

Pressure Plus LLC is your local Painting and Pressure washing specialist. We provide services for both interior and exterior for both commercial and residential properties. Our staff is dedicated to providing you with quality work that will last, in the most efficient way possible to save you money.  …

Ed's Handyman Service is currently rated 4.7 overall out of 5.

No, Ed's Handyman Service does not offer a senior discount.

Are there any services Ed's Handyman Service does not offer?