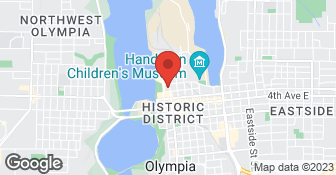 Hung Right Doors was founded in 1998 in Aberdeen Washington, and later added a second location in Olympia Washington. We now service all of Thurston, Pierce, Lewis, Pacific, Mason, and Grays Harbor counties. Our business specializes in both commercial overhead doors and residential garage door sales, installation and garage door repairs. We are dedicated to offering the highest quality garage doors and service at affordable prices. We carry all models of high-quality Clopay Doors, as well as electric operators. Whether it is a large commercial installation, or a garage door for your house, our service is second to none. We take pride in knowing that we are the Olympia Garage Door Leader....

The repairman was very professional. He called ahead to tell us when he was on his way and arrived right on time. He took one look at the door and could tell it was recently painted and immediately diagnosed the issue. The paint from the door was adhering to the door trim. He showed us the problem areas and instructed us how to tenor thee paint properly. He was friendly and courteous at all times. Since he didn't perform any labor he even waived the $140 service charge!

Description of Work
Our garage door suddenly wouldn't open when you first pressed TBE button. It would shake violently like out was going to break and then finally open.

Were able to come out the same day my garage door broke.

Did an excellent job explaining what needed to be done and the cost involved. Would hire again. Very professional.

I callled in the morning the receptionist was SUPER nice. They were out that afternoon and replaced the springs. She did explain service call was $119 and each spring would be $70 each, so I was informed. The service person also did service the door opener, which was about 2 years old and probably didn't need it but it doesn't hurt any I suppose. I'm not sure if the service call price is high or not, I didn't call other businesses to check as it is a rental and I wanted the work done as soon as possible for the tenants.

was great...called them out to do an estimate they came out, did one in about 15 minutes and set up for them to come out and do the install about a week later. both times they came within their window they gave me. took awhile to get them installed but scott, the installer, warned me about that when he got to the site and looked at it. did a great job installing both openers, programmed them, showed me how to do the programming myself, set up the opener buttons and keypad, and even though it took probably an hour or more longer than anticipated the only charged me the original estimate.

Description of Work
installed 2 garage door openers...had to cut off garage door track and add a flipper kit to make enough room for the openers to work due to extreme low clearance

My husband called the company to report the failed cover on the outside panel and was told that there was no warranty on it and they would charge $65.00 to repair it......It hasn't been in place a month! We are speechless!

Description of Work
My husband and I had Hung Right install a garage door, opener and outside control panel less than three weeks ago. Yesterday the weather cover on the outside panel separated from the device.

My car was stuck in the garage when I got in it to go to work. No matter what I did it wouldn't open. I called Hung Right Doors and they worked me into their schdule and fixed the door that day. Nice people and great service.

Description of Work
Replaced a spring that was stopping the door from opening.

All went well. Staff and installers were helpful, prompt and did good work.

Hung Right arrived on time and performed the maintenance my garage door opener needed, as well as changed the signal and provided an extra opener (about $30, I think). They were very courteous and professional, and answered my questions well.

Description of Work
Maintenance on garage door opener, change signal, provided an additional opener which was, I think, about $30 added to bill.

They were good. They prompt on the estimate. They did the work with no problems and checked with us. Everything was good. The door is working fine.

Description of Work
We used Hung Right Doors. They provided us a garage door and opener.

Precision Garage Door of Seattle is the best choice if you are looking for garage door repair, maintenance, replacement and installation in the greater Seattle area. Our vast experience sets us apart from other competitors. Our experienced garage door specialists and our approach to finding and treating the cause of the problem is why we are the trusted name for garage doors in Seattle.  …

I Know a Guy LLC

Sales, installation and lightning fast repairs and installations for any door or gate that opens and closes in SEATTLE, Tacoma, Federal Way, Olympia, Tumwater, Yelm, Lacey, Dupont, Lakewood, WA, etc… If you live on an island, or anywhere within 40 miles of the Puget Sound, just remember, as of today, YOU KNOW A GUY! I Know a Guy Garage Doors is a northwest leading company for all emergency and routine garage doors and opener repairs, factory direct pricing, garage door installation and repair across the entire Puget Sound. Whenever warehouse roll up doors, trucking doors, businesses and homeowners need expert quality garage door services, they remember that TJ at I Know a Guy Garage Doors is the favorite choice of all that are lucky enough to have him come out… Seriously, check out the testimonials and make the best call you have ever made (Just added Handyman and Windows to his Products and Services). Warranty: In addition to manufacturer warranties, there is a five year labor warranty on everything we do.  …

Since 2000, we’ve been the Puget Sound's garage door specialists. We provide high quality garage doors and garage door openers for residential and commercial clients, as well as our superior standard for customer service for any job we do. From small repair jobs or broken spring replacements, to entirely brand new garage door systems. Our clients enjoy low prices, fast service and long lasting new garage doors. With over 30 years of industry experience, we understand your garage door needs, AND your expectation of professionalism and satisfaction for your home. Our shop is located in Sumner, WA. We are a locally, family-owned business, which gives us that uniqueness that sets us apart from other door companies, because we are that much more invested in our customers. We are proud of the company that we have built, and the services we have provided for so many years! We take an enormous amount of pride in our 100% customer satisfaction rating, which is why we appreciate all the people who consistently refer their friends and families to us, as well as all of our returning clients of many, many years. All of our employees are professionally trained and dedicated to meeting your garage door needs. In addition to installing new garage doors, we offer garage door repairs, maintenance and products. We carry garage door systems and products from CHI, Northwest Door, Amarr, Clopay, Wayne Dalton, Carriage House Door Company, Lift-Master and Linear, who are some of the most trusted and respected names in the industry. If you have an immediate problem we’ll do everything we can to help you over the phone. We believe if we can help you solve a problem over the phone to keep you from having to pay for a service call, then we will do everything in our power to do that. We offer fast, free estimates, for residential and commercial garage doors. Call us today to schedule your estimate or service call!  …

We do not do interior and exterior doors.

HUNG RIGHT DOORS is currently rated 4.9 overall out of 5.

No, HUNG RIGHT DOORS does not offer eco-friendly accreditations.

No, HUNG RIGHT DOORS does not offer a senior discount.

Are there any services HUNG RIGHT DOORS does not offer?

We do not do interior and exterior doors.