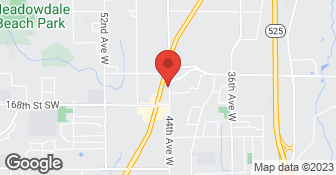 Residential roofing & gutter specialist.Thousands of roofs done in Greater Seattle since 1983.Small company with ''hands on'' control by staff with nearly 100 years of combined experience.We will quote your roof, complete on schedule & budget. Only then will we invoice you for services....

Hillside Roofing was excellent. They were courteous, prompt, did the work very quickly and were very professional. I would hire them again if needed. Very happy customer.

In the process of cleaning moss off of my chimney, I found soft spots in the roof around it. I called Hillside, and spoke with Dan South. We made an appointment for him to come take a look at the roof mid week the next week. He arrived a little early, which worked out well for me. He looked at the roof, and said that the problem was with my chimney, and not the roof. He said the soft spots would be okay until another roof was needed, but that I needed to contact a chimney mason and have them address the issues with the chimney. He checked out the rest of the roof and said it looked fine. Dan was professional, honest, and personable. I will call again in the future should I need roof work.

Description of Work
Checked soft spots in front of my chimney, and then checked out the rest of the roof.

We purchased an Angie's List deal. We contacted the company right after purchasing the deal and the company sounded as if they had sold too many deals and were busy. They took our name and number and told us they would call back. They never did. We contacted them again a couple months later and left a message. We never received a call back. We wasted $200 on an Angie's List deal and did not receive the services promised.

Description of Work
We purchased an Angie's List Deal to have our roof inspected. Contacted the company several times. Reached them once and they told us they would call back. They never did. Called again and left a message with no response.

2&1/2 days of work for a tri-level house. You have to wait your turn for them to start but it was done cleanly and with no complaints. The installers were courteous and knowledgable and worked hard. When they finished the roof,lawn and gutters were whistle clean. My worst problem was deciding which color roof to select.

Description of Work
Removed and replaced existing asphalt shingles, provided updated venting system, cut off some rotting beam ends, replaced a sheet of failing plywood, removed old roofing and cleaned it all up.

It was really great. They showed up on time.

Description of Work
I bought a Big Deal from them for a roof maintenance service and inspection.

I called for a refund and I also wrote an email through Angies list with no reply. I would NOT recommend.

Description of Work
I knew I needed some work done on my roof the this older home I purchased. He did nothing but look at it and say to hire a person that cleans roofs and repairs chimney flashings. It cost me another $500 to have my roof cleaned by someone else. This company did nothing at all and would not give me a refund when I asked for it.

Customer bought an Angies list coupon for roof inspection & 2 hours of labor. Inspected the roof & found it was in good condition. I recommended roof cleaning & masonry work on chimney counterflashing. We do roof installations & repairs only, so I could not help her. She then asked if she could get a refund for her $200 coupon. I said yes-but you must contact Angies List to so & tell them that our services were not needed. She thanked me for the help & said she would look into Angies List coupon refund policy. This happened in August of 2013. She has not contacted me in any way concerning this matter until now, April 201`4. I would gladly refund her money if she would contact either us or Angies List to settle. She waited 7 months to tell this story. We assumed she handled everything & moved on.
5.0

From start to finish, our experience with Hillside went as well as one could ask for. The owner, Greg Gustelius, did the initial inspection, and I found him personable, articulate, thorough, and willing to spend as much time as I needed to discuss what the scope of the job should be. He was punctual, and we had his bid a couple days later. We got three other bids, two of which were competitive, Greg's being only slightly lower, but it wasn't just the money. He impressed me, and we felt confident choosing him and his crew. He gave us the requested forewarning of when they were going to start the work, and they finished when he said they would be. His crew was polite, worked quietly(as "quiet" as roofing can be...), did less damage to the encroaching plant life than was reasonable to expect, and cleared the sight of virtually every scrap of debris before they left. The roof looks great; the invoice for the job matched the bid, and they did everything we had discussed. We are indeed satisfied customers.

The provider came out and inspected the roof, informing us that it was in better condition than I had thought, and that there weren't really any serious issues to address. He said that he would get back to me in a week or two with an estimate for replacement just so that I was aware of what the cost would be when the time came, but that we didn't need to think about replacing it immediately. Time passed and we never received the estimate, and eventually I forgot about the whole thing until I received an email from Angie asking me to review the service. I made an attempt to email Hillside, but never did get a response, and I quickly forgot again. Finally last week I called them and was able to eventually speak to the person who had come out to do the original inspection (the owner, I believe). He apologized for the delay, said that he would send out the estimate immediately and refund the cost of the Big Deal since there was no work to be done at this time. I believe the delay (6 months) was the result of an honest mistake caused by me getting de-prioritized for the "real work" that was happening during the busy season, eventually causing my estimate to "fall through the cracks." If I also hadn't forgotten about it, I don't believe it would have taken as long as it did. The person who inspected our roof seemed very personable and knowledgeable about the subject and was willing to take the time to explain concepts, rules, and whatever else to an interested homeowner.

Description of Work
We bought a "big deal" for roof repairs, plus free inspection & estimate for a new roof.

I wanted an expert to advise me on the roof of the home I recently purchased and make any minor necessary repairs. Be prepared to be astounded by his knowledge (sarcasm). He seemed to go out of his way to impress you with his expertise which I appreciated at first but eventually made me leery. The first appointment was for the consultation. Communication on getting the actual work done was difficult at best. Expectations weren't clear (he eventually told he needed a signed agreement, then called and said he's be out the next day... weather prevented that). My concerns weren't clearly addressed. In the end, since the work wasn't getting done so I requested the remainder of my money back which was promptly sent.

Member called wanting to find a way to stop rain water from running off areas of the roof known as "Bull noses'. We dicussed ways to do this but they were all elaborate for the small amount running off. We addressed other conditions of the roof. Yes, I did give him extensive knowledge & ways to eliminate his other concerns. Customer was given a list of things to repair on a per item basis. More phone conversations followed concerning which really needed to be done. Getting any of the work done needed a signed contract as we had not received one back. Unfortunately weeks had gone by & we were getting to job customer canceled. I'm sorry things happened this way but I know the customer did gather some knowledge (sarcasm) about keeping a roof serviceable.

All About Service, Inc.

All About Service is a Everett based company that has more than 14 years of professional experience working across King and Snohomish Counties. All About Service is an owner/operated company, owned by Mario Villarreal. We clean roofs, gutters, windows and also pressure wash driveways, walks, patios, decks, and siding. We offer custom cut 5K and 6K seamless style gutters. They are made onsite to ensure a perfect fit. All About Service can also clean skylights and sky windows. If your home's exterior needs sprucing up, we are your partner. Our staff is well trained, friendly, prompt and courteous. We have great prices, a large number of repeat customers and we look forward to helping you with your cleaning needs.  …

Hillside Roofing & Gutters is currently rated 4.7 overall out of 5.

No, Hillside Roofing & Gutters does not offer eco-friendly accreditations.

No, Hillside Roofing & Gutters does not offer a senior discount.

Are there any services Hillside Roofing & Gutters does not offer?