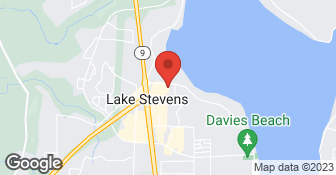 Cost is determined by the job. No travel charges and No service fees. No extra charge for 24 hour emergency service. We provide yard clean up of branches, pine, cedar, and more! Give us a call to help make your clean up easy.  …

We are a full service excavating and Landscaping company. We are able to handle just about any tractor, excavating or landscaping project you may need. We have been serving the Snohomish and King county areas since 1992. Our "Commitment to Excellence" and customer service satisfaction have made us a leading and successful service company in our industry.  …

Miguel and his crew have been maintaining my yard regularly for a couple of years and always do an excellent job. They always show up on time and are very flexible when I ask them to do yard clean up or whatever is needed. They also did an excellent job replacing the lawn at our rental property.

Description of Work
Mostly weed whacking slopes and around our buildings, yard clean up and lawn replacement.

I phone on Monday morning to schedule and estimate, they were here with in the hour and came back that afternoon to complete the work. Yard was a real mess, weeded not only the flower beds but the walk and patio area, fixed fence that was starting to lean due to all the rain and wind went above and beyond to make sure the work was done well. Yard looks great and I will have them come out regularly to maintain it.

Description of Work
Cleaned yard and got it ready for Spring, mowed, weeded even fixed my back fence that was leaning.

I phone on Monday morning to schedule and estimate, they were here with in the hour and came back that afternoon to complete the work. Yard was a real mess, weeded not only the flower beds but the walk and patio area, fixed fence that was starting to lean due to all the rain and wind went above and beyond to make sure the work was done well. Yard looks great and I will have them come out regularly to maintain it.

Description of Work
Cleaned yard and got it ready for Spring, mowed, weeded even fixed my back fence that was leaning.

Miguel arrived promptly for both the free estimate and the actual job. He even phoned prior to arrival. He and his helper worked quietly and efficiently. After working approximately 7 hours, both welcomed my evaluation. Happily, I expressed my appreciation for a job well done. I would not hesitate to hire this landscaping company, again.

Description of Work
Miguel and his one-man crew weeded, edged, and mulched our front yard. They raked up all the weeds and spread Preen on the mulched areas prior to adding new mulch. Any spilled dirt or mulch was cleaned off the driveway.

Excellent communication and showed up when he said he would. We will be using Miguel's service on a regaular basis.

In addition to what I just wrote in the prior box - well, let's see Miguel Ayuso and his two guys got here at 7 am and got right to it. Miguel got his guys oriented, stayed for a good while and when things were well along he and one of the guys took off to do something else. Julio, the older of the two helpers just kept on working. The man is the Energizer Bunny, with a personality Miguel and his other helper came back in the late afternoon and they finished up around 6 pm We had a beer in the driveway and they took off. I speak Spanish and enjoyed practicing with them. The yard looks about 586% better than when they got there, and without question I would recommend Miguel over and over again.

Description of Work
1. Took out an ugly tree 2. Weeded the yard 3. Thatched the yard 4. Brought in a truckload of mulch and spread it 5. Dug out those annoying and hard-to-remove weeds that grow up in the spaces between the panels of the driveway 6. Edged the driveway 7. Trimmed a small hedge and whatever else needed trimming 8. Scattered grass seed, first filling in several bare spots with dirt 9.. Cut the grass and weed-whacked along all edges 10. Hauled everything either away in their truck or into the yard waste container 10. And not as part of the $600, helped me unload firewood from my Explorer, carry it around to the wood shed and stack it neatly

They do a wonderful job. I've used them for about a year or year and a half. They tend to lots of little details. There are also tons of leaves to clean up all year long. Our yard is one of the best-looking yards in the neighborhood because of them.

Description of Work
They come out every other week to clean up the yard.

Miguel and his crew do a great job and showed up as scheduled.

Description of Work
Line trimming slopes on our property

Miguel came to our home to give a bid and was very professional and trustworthy. We have approximately 1/2 acre of lawn and 2 steep slopes that have to be weedeeated. There is also a significant amount of trimming along our road and field. Miguel gave us a fair price of $100.00 per time. I had recieved a similar bid from 2 other sources. I chose him because he seemed trustworthy and kind and very hard working. He has been here for 2 months and the quality of his work has been excellent. I have recommended him to several other people and they have been very pleased with the work his team has done including chopping back blackberries, clearing ivy etc. He always shows up when he is scheduled and I would highly recommend his work.

Description of Work
Mowing and weedeating a large lawn and 2 steep slopes.

We were amazed at the tranformation and they did it all in one day! They did an awesome job. We couldn't be more pleased and we would definitely hire them again.

Description of Work
We have a large yard that is too much for us to take care of any more but, like it to be neat. When I contacted Miguel he was quick to come out and give a bid which we thought was very fair. He was very polite, professional, hard working as well as his crew. They showed up right on time and got to work. They completely weeded, cleaned, trimmed, edged and barked the garden beds and re-graveled the pathways. It turned out exactly how we had hoped.