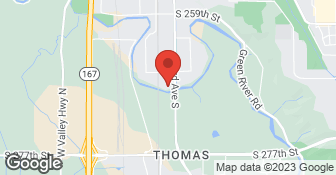 COVID-19: We are currently open and following CDC protocols. Green City are your local install experts in heating, cooling, boilers, radiant in-floor heating, mini-splits etc. We are family owned and operated and dedicated to finding the best solutions possible for all your heating and cooling needs. Whether it is an installation, service, maintenance or complete system design we take the time to educate our customers and give you options on all systems available to help make your home as comfortable and energy efficient as possible. Our team is prepared to help you with the sales, service and installation of the comfort system that is ideal for your home. Be sure to ask Green City Heating and Air-Conditioning for a free estimate....

Our sales guy, Josh, was very knowledgeable about the various systems/products available. He was personable and was quick to return phone calls and make adjustments to his estimates. We were really happy with the install guys, Matt and Devon. They were prompt, courteous, friendly, funny and very knowledgeable/experienced. Their work was thorough and impeccable. Neat and tidy too. We highly recommend Green City.

Description of Work
We replaced a furnace and added an air conditioning unit. Both Lennox products.

We had some issues with our home power, which caused the furnace to blow out. It was an old furnace anyways (18 years). The power company (Puget Sound Energy) told me the problem was a "bad neutral." In any event, our furnace didn't work starting on a Thursday. Puget Sound Energy sent out a crew to fix the power the very next day (Friday) and I contacted Green City Heating on Friday as well. The owner (Jeff) worked me over the weekend to put together a quote and, much to my surprise, he sent a team out to our home on Monday to replace the furnace. We were thankful because our home was an icebox over the weekend. On Monday, it took about four hours for Green City to remove the old furnace and install the new one. The installers were professional and courteous. They communicated with me during the project. At the end, when the thermostat still didn't work (from the "bad neutral," we suspect) even though the new furnace had been installed, the Green City crew installed a temporary thermostat so we would have heat and assured us that they would procure a new thermostat, which was still under warranty, and install the replacement thermostat as soon as possible. Overall, I was very pleased with the speed and quality of their service, and that Jeff worked me over the weekend to problem-solve. Overall, it was an excellent experience!

Green City Heating & Air Conditioning was phenomenal to work with. During a busy summer, Jeff made time to visit my house and talk through all the options for heat pumps – and explained various pros & cons of the systems so that even a first time homeowner like myself felt knowledgeable and empowered to make a decision. Once I made a choice for a heat pump, his team stayed on top of notifications throughout the supply chain crisis of 2021, keeping me up to date about when the equipment would arrive in order to schedule the installation. The installation team were totally professional, friendly, and quiet! They were courteous around the house and very mindful not to let our cats our while working at hour house. The installation was totally completed within the single day, and at the end I was given a very thorough explanation of every piece and how it worked. I would absolutely call Green City for any future HVAC needs. 10/10 highly recommended.

Our 33 year old furnace gave up right before the cold snap this past ten days. After getting competitive bids, we chose Green City because the estimator, Josh, was the most thorough in evaluating our home and explaining the pros and cons of various systems, not just launching into what he could sell me. The installation occured on time and the technicians were courteous, respectful and professional. We love our new dual heat pump/furnace, and we love Green City.

Description of Work
replace our furnace

While this is a busy time of year for furnace installers, Green City is the only company of the six that I requested bids from on Angi that even called me. Everyone was very helpful and worked with me to get a new furnace installed as quickly as possible. While there were a couple of minor installation glitches, Green City was right on top of it and came back out the next day to get everything right. They recommended a furnace with the features that I was looking for, at a fair price. I would definitely recommend Green City.

Two months after install and still haven't passed permit inspections... We recently had Green City install a heat pump and air handler system for our central ducted house. Install went ok, they were careful not to damage the house which was great. Had to have them come back to fix up a poor sealing job on the penetrations of our home. Where it has all gone down hill has been the permits. It took weeks for them to actually get me the permits after the job was done. Then we failed both Mechanical and Electrical inspections. After informing them of the failures, they said they would handle it, and after I waited a few more weeks of nothing I contacted them again and they brought someone out that day to fix up the rest of the mechanical. So thats finally passed. After another few weeks I call again and they act like they are not even aware of the Electrical Permit failures. So its been over two months since the install and I still do not have the proper permits for my system. Their post-install service has been abysmal.

We would definitely use Green City in the future. We had a very positive experience with all of the staff at Green City. Jeff, the owner, came to our place about a year ago to give us a bid for a mini-split system install and we sat on it until a month ago as it is a big investment. He was very no-pressure and patient in answering all of our questions in easy to understand terms. Of course the price went up for our install but it had been a year and the increase was logical. Alex and Anthony the installers were on time each of the two days for our job and very polite and good communicators. Alex was great about correcting one issue with the type of head unit that we wanted in our main living room (we went with a silver/gray finish instead of the normal white). Alex made sure to check in with us at the beginning to identify the locations of the five indoor units and he didn't even blink an eye when he found out he needed to run some of the lines through our cramped attic to ensure the line sets didn't run around the front of the house. He also made sure to check-in regularly on how the install was going and to go over the appropriate running of the electrical line that met our needs as well as theirs. The indoor units are super quite and cool down our rooms quickly, just what we wanted. We can't wait to try out the heating function this fall/winter. Alex and Anthony even notched out one of the line set cover runs to sit nicely up against our air vents.

My experience with Green City Heating and Air has been great from start to finish. First, Jeff, the owner, gave me various options for my heating and cooling needs and quickly followed up with a detailed written bid at a competitive price. He was also able to include some rerouting of ductwork and moving the position of my furnace for a more reasonable cost than the quotes I'd been given by the big HVAC companies. The HVAC techs -- Ron, Anthony, and Tyler -- were all professional, respectful of my home, really hard-working, and just nice guys to be around, and Debbie in the office has been so helpful and such a pleasure to deal with. Thank you, guys -- you're all awesome! But what impressed me most about Green City is how they reacted when we ran into a couple of unexpected problems: they were responsive, very fair, and worked on finding a solution I'd be happy with. This company seems to genuinely care about providing great customer service, and that's a rarity these days. I wouldn't hesitate to hire them again in the future and I'll be recommending them to all my friends and family.

They arrived on time and installed the unit and new thermostat. The technicians seemed pretty knowledgeable and helped give suggestions about some vents that weren't blowing enough air.

First, I had considered a few options: repair existing and install either a new water heater or change to tankless electric. When Green City called to set up a time to develop a bid, I asked to speak with a technician. Jeff answered and led me through very logical decision tree which led to them replacing my 50 gallon tank. I was very impressed with the information he provided regarding the various alternatives. He asked how the old water heater had performed, and If I was happy with its performance why would I want to change. Made sense to me. Their bid was quite fair, they came out and completed the installation when they said they would. Presto hot water and they hauled away the old water heater. I had a couple of meetings that I needed to attend to that morring and because they were so punctual and efficient I made both meetings,

All heating and air conditioning needs from services to installs. We also service water heaters, radiant systems, boilers, and gas piping work. If you have questions about services you may need please feel free to contact us!

Duct cleaning (can refer customer if needed). We do not hold a Washington Plumber License and subcontract all plumbing work.

How is Green City Heating and Air Conditioning overall rated?

Green City Heating and Air Conditioning is currently rated 4.8 overall out of 5.

What days are Green City Heating and Air Conditioning open?

Are warranties offered by Green City Heating and Air Conditioning?

What services does Green City Heating and Air Conditioning offer?

Green City Heating and Air Conditioning offers the following services: All heating and air conditioning needs from services to installs. We also service water heaters, radiant systems, boilers, and gas piping work. If you have questions about services you may need please feel free to contact us!

Are there any services Green City Heating and Air Conditioning does not offer?

Duct cleaning (can refer customer if needed). We do not hold a Washington Plumber License and subcontract all plumbing work.