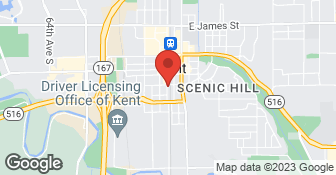 7 time Super Service Award Winner! AAA Pest Control is a full service pest control company, offering pest control and removal services throughout the puget sound region. We offer two tiers of service - you can hire us to identify and correct a pest problem or you can purchase products from our retail store and we'll explain step by step how to rid your home or business of pests. Additional email - info@aaapest.com. Additional phones - (425) 747-9725, (253) 833-1081. See website for Additional phones. Award is winning....

Overall there services is good.

DESCRIPTION OF WORK
We use their services for pest control prevention. The services is on a yearly basis.

DESCRIPTION OF WORK
I had originally scheduled for carpenter ant extermination, but after he performed an inspection around and underneath my home, he said they were only mound ants. He saved me over $200 by being honest. I appreciate that and will definitely use them in the future!

DESCRIPTION OF WORK
Inspection and recommendations for taking care of rodents.

DESCRIPTION OF WORK
We have had a contract with the company for over a year ,in which they come out several times a year and perform services. When I initially signed up, they were told we had a dog, and therefore we  had requested to be informed when they were going to be coming out. Our dog is very protective of the house, and we also have a house alarm that could be set off if the dog hits the front window hard. They were also informed of our days off and when we would be home,so that we can be there so our dog would not freak out. The first time or two, they came out when we were home. Then, they came out when we were not home and did not inform us a day in advance as they 1st stated. needless to say, our dog was not happy, went into protective mode, and this set off the alarm on as our dog jumped on the front window several times.The alarm company contacted us, saying a glass break alarm went off, causing us both to panic wondering what happened. after we found out that it was the pest contol and not a break in, no glass had broken, we contacted AAA pest control again. at this time, they were informed again that we wanted to be contacted when they would be coming to the house. Apparently, they did not have a record of our previous instructions. So, at that time, I made it perfectly clear that, 1st we wanted a notice when they where coming, no problem I was told, they offer that service to all thier clients. they were also informed once again that we wanted to be home and we informed them once again of our days off. No problem, once again I was told, we will make sure it is in our system. OK,great! well, to my dismay, it happened again, no call, service on a day we did not request, alarm went off AGAIN. Got the call from trhe office, telling me how Mike came out and the dog set the alarm off again!! My reply, how many  times do we have to go through this, I requested notice several times, she told me that she called and left a message, the day before.. I told her I would call her back. after speaking to my husband, he did not recieve I message, nor did I, I called her back,she was not in anyway apologic, in fact she had told me that she was the one who called and left a message, I asked why she did not wait for a call back from  me to say we would be home, and  replied that they offer that service, but I declined it  last time we talked. TOTALLY NOT TRUE! No apology, no sincerity!   Will Not want to repeat this incdent a 3rd time, so will  not use them again. NO ATTENTION TO CUSTOMER SERVICE, OR NEEDS! RUDE AND INCONSIDERATE!!!

DESCRIPTION OF WORK
We had an oderous ant problem for a number of years. Had the house sprayed numberous times by another exterminator but the ants stayed with us, mainly in the kitchen. AAA drilled a few holes in the kitchen walls to allow access to the nest, sprayed into the holes. It's been 2 weeks and we have not seen an ant since. Mike (the technician) gave us a 6 month guarantee against any further outbreaks. This guarantee was not promised in our over the phone agreement with AAA. We are totally satisfied with the service. They went above and beyond for us, even accomodating a scheduling conflict that had the potential for me to be late for our appointment. I highly recommend AAA Pest Control.

DESCRIPTION OF WORK
Talked to "Joe". He gave me some very good advice. My impression was he wasn't in it just for the money.

DESCRIPTION OF WORK
Setting traps and diagnosing where the problem was coming from. Provided follow up visits as well.