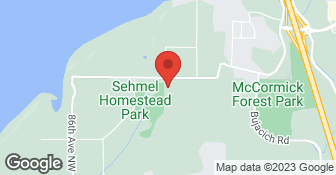 We do vinyl windows and vinyl and hardi siding we are a small company low over head so we can keep costs down to you the customer while still providing great products and service I have over 30yrs experience my crews are all certified and trained pros we offer lifetime warranties and glass breakage warranty on top of that warranties are transferable to the next home owner we also have A rating with the BBB and A rating with Angie’s list we offer senior and military discounts give us a call text or email you won’t be sorry....

Jamie and his crew were great from start-to-finish! Very professional and down-to-earth, did what they said they would do, when they said they’d do it! Would hire again without hesitation!

Jamie was a pleasure to talk with, was very responsive and helpful. He responded to the quote request first thing the next morning and followed up with a phone call in the evening after not hearing back from me. In a time where all contractors are very busy it was nice to receive this level of attention. We chose a different contractor at this time so cannot speak to the quality of work.

We had a few possible leaks in our bedroom windows, they were picture windows that did not open, where we already planned to have them replaced in the long run with ones that open to get some air in the bedroom. So, we requested a few bids and decided to hire WCV to do the replacement. Our house has dozens of large windows, that someday will need to be replaced, so we were looking for a company that had the capability to do a job at that scale some time in the future. Jamie was very clear, straightforward, organized and professional. We knew exactly what to expect and when to expect it. The whole process took about 6 weeks, as the windows had to be manufactured as they were custom, we also had a holiday in the middle of that time period. The guys arrived yesterday on time, where they quickly and professionally installed the windows, cleaned up the mess, and were done! We are very happy with their work.

We had a good experience with all involved in this project. The team showed attention to detail and keep us informed during the entire process. They were friendly and all our questions and concerns were answered making us feel at ease. The whole project took a week and they showed up every morning exactly at the time they said they would. The look of the house has totally been transformed and we have received many compliments on it. If your looking for a company that takes pride in the work they do....look no further!

I would highly recommended WCV windows. The 2 man crew that installed 9 new vinyl windows including a sliding door did an excellent job in just a day! We were amazed by how their attention to detail gave us beautiful looking looking windows inside and out. Allso, we're staying much warmer and have much less outside noise coming in. A job well done in very friendly professional manner.

Couldn’t ask for a better result!

Description of Work
We had all of our downstairs window replaced by WVC Windows and we were very impressed and extremely satisfied with their craftsmanship. Jamie and his crew were very responsive, provided knowledgeable advice to help us choose from the many available options, and we would definitely recommend them to our friends and family. Our windows look great! Thanks Jamie and your crew for a job well done!

Description of Work
Needed to find some options for window style replacement and Jamie was very helpful with options and ideas. He knows the products well!!

Perfect all the way around.

It was great. Everyone showed up on time and performed the exact work that was agreed on. I have heard horror stories from neighbors that were told one thing and then when work began they were told something else. With WVC everything they said they would do was done. I had siding paint and gutters done and everything was on schedule and completed in the time frame agreed on. I absolutely would and have recommended them.

We are very happy with WCV windows. They were very professional from the bid through replacing the windows.

Description of Work
We had 7 windows replaced.

Jamie gave us exactly what he said he would, the quality is excellent, and both Jamie and the installers were pleasant and professional. I would not hesitate to use WCV windows again in the future.

Description of Work
Had to replace an old slider and window attached. Jamie came out promptly and gave us a competitive bid.

Did an outstanding job. Recommended highly.

Description of Work
Replaced all windows in my duplex. Difficult install due to cinder block construction.

WCV Windows Inc is currently rated 4.9 overall out of 5.

No, WCV Windows Inc does not offer eco-friendly accreditations.

No, WCV Windows Inc does not offer a senior discount.