With Angi since January 2014 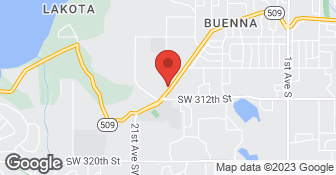 These guys were amazing. We have an older (1929) Seattle house where the concrete sewer pipes have been failing. We've repaired them in sections. The last section of about 55' started leaking into the basement. What a mess. I contacted someone from the List who told me to get a camera inspection of the side sewer before they would even come out. We hired a rooter service they recommended to camera the line ($250), who told us there were no leaks in the line. So we were back to square one, trying to figure out why water leaked into our basement floor when using the shower in the main floor bathroom. We ripped out some drywall and traced all of the lines, couldn't find a leak. After we eliminated all possible other explanations, I concluded that it really was the sewer line that must be leaking through cracks in the foundation. So I started calling companies from the LIst to get bids. Not a single one called me back (including three calls to the initial guy I contacted)! We had even dug an access hole in our back yard where the sewer line connects to the house in the hope that the leak was there and it would be a cheaper fix. No call backs, and in the meantime we had this mess in our basement. We're now about 4 weeks into trying to solve this problem. So I looked online and found sewertechs.com. I called on a Sunday expecting to leave a message, but JB (the Field Ops supervisor) answered the call. He agreed to come out the next morning at 9 am to look at it. He and his tech scoped the line using their own scopes at no charge - eveyone else charges around $250 for this. While there were no visible leaks, he was able to see that the pipes were very thin and likely leaking. Another thing he talked about was their robotic line cutter. Our downspout pipes are attached to our side sewer, and most companies have to dig out each downspout (which are 5-10' below grade) in order to reconnect them once the side sewer is relined. They have a robotic cutter which eliminates the mess/damage to plants and some of the expense of digging out each drain/downspout that feeds into the side sewer (you do pay for the robotic cutter but less than the cost of them digging a 7' hole). They were tied up for several weeks on a big job at a naval base, but they carved a day out of their schedule the following Monday because we had an active leak. Three guys showed up early and finished in the evening. They relined the side sewer, put in new connections to two of our downspouts, and created a new clean out. They were very courteous and professional. Trenchless pipe repair is absolutely the best way to solve this difficult problem of side sewer leaks, and these guys do it all day long. I've discovered that plumbers contract with professionals like A+ Sewer Technologies because the technology is expensive and requires specific tools and expertise. So why hire a middle man? I wanted this fixed for good - so I only wanted to hire a company that does it as their primary business. I was lucky to find these guys. They work primarily for contractors (many municipalities require new sewer lining for major house demos) and larger scale jobs, and they know what they're doing. They're a great additional to Angie's List.

We are a underground pipe restoration company that serves the, Greater Seattle-Tacoma, Puget Sound Region. License info: PIPEG**930J4. Please see our website at www.pipeguys.com or call for information at: 253.537.2830.  …

Our commitment to doing the job right the first time begins with a consultation of the client's sewer and drain needs. We do sewer and drain camera inspection, hydro jetting and trenchless technology as well as sewer repair.

How is Sewer Techs overall rated?

Sewer Techs is currently rated 5 overall out of 5.

What days are Sewer Techs open?

Are warranties offered by Sewer Techs?

No, Sewer Techs does not offer warranties.

What services does Sewer Techs offer?

Sewer Techs offers the following services: Our commitment to doing the job right the first time begins with a consultation of the client's sewer and drain needs. We do sewer and drain camera inspection, hydro jetting and trenchless technology as well as sewer repair.