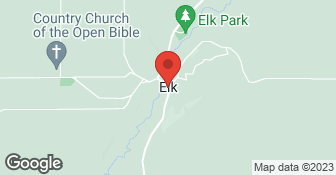 Business operations began in the spring of 1983 dealing with all catagories of fence design and installation. Our clientele ranges from government, residential, agricultural to commercial. We are a small company with attention to detail, and utmost courtesy and respect for our customers. We work year round and offer winter discounts from Nov. 1 - March 1. Early scheduling highly recommended....

We are a fully licensed and bonded General Contractor. We specialize in handyman, home repairs and remodels. Landscaping. We strive for 100% customer satisfaction.  …

Our initial conversation took place while on family vacation . Based on customers scheduling needs we were able to recommend a semi-retired fence installer with ample room to help customer .We are never satisfied when performance , in any facet , does not meet AAA ratings , and would like to apologize for any in-conveince we caused this customer . F.Y.I. We do not have caller ID on business line ,verbal message is essential , and very limited cell reception .
5.0

right on time, prompt with replies, stuck to price quote, good quality materials and friendly manner and service all around. I would highly recommend this company. He also does landscaping.

I called North 40 Fence upon recommendation from Big R Supply on Highway 2. From the first call until the time I hired him, he was prompt in returning calls, was clear on details and great to deal with! I hired him and his work is excellent! On top of it, he was prompt on timing, calls, etc. He even added some finishing touches to it, such as angling the top of the posts and he cut the posts at different heights. He also installed the new posts in front of the old ones such that I would have use of my old gate for a week or more while the posts set up in the concrete. It looks great and is awesome to open and close! :). I would HIGHLY recommend this company. And I agree with his description that you want to get on his list early, because he fills up fast! I can see why.

Description of Work
He was replacing 2 railroad ties used as gate posts with 2 new 6x6 treated posts, and putting in two additional posts, one to each side of those as the support posts. He was sinking them into rock and pouring concrete and then installing all new gate mechanisms.

We contract installation with materials, labor, and design included. We always search for the best alternatives based on the need.

We are not a supplier.