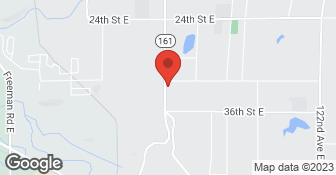 Archterra has been in business since 2005, and is dedicated to one-of-a-kind landscape design and professional construction. From water features to sprinklers to lighting, your lawn will transform before your very eyes to become a unique living space that will add value to your home....

After contacting several other contractors I called Archterra. The estimator contacted me quickly as a opposed the the previous contractors. He gave me a quote and estimated time frame within a couple of days. Archaterra's crew arrived as on time. Unfortunatly, that crew quit the company on the next day. So Ryan had another proffesional crew out to complete the project. The work was done a year ago. I waited to do the review because I wanted to see how well the system worked. After some trial and error and reading the instructions provided I was ableThe only negative was the quick walk thru on it's operation. The only negative was the quick walk thru on it's operation. They also built a sturdy deck which we have been able to enjoy. This company gets my recommendation.

The owner arrived to the appointment on time to review the project. He was polite and seemed genuine in person. He left stating that he'd get back to us in the next two days with an estimate. I never heard back, so I called several days later. He told me, "Oh yes, I'm working on that right now." I never heard back. I called one more time and left a message. Never heard back. What I would recommend is, don't say you're going to get back on a job if you don't intend to. Just say you don't have time for the job, or it's not the type of job you do. Lesson learned: Never going to chase a contractor. Either they want the job or they don't.

Description of Work
A yard project

I then called them 2 months later to start the first project. Received no response. I emailed them. No response. I went to their office and spoke to them. Was promised that they would contact me within a day to set up a time to perform the work. Never happened. I called one last time and still received no response. It was a complete waste of time to get them to come in and give an estimate and then when I wanted the work started they never bothered to even call me back. Completely unprofessional. I even told them when I spoke to them in person that if they no longer wished to do the work just let me know but they could not even do that. I am really disappointed.

Description of Work
I asked for an estimate for several different landscape projects. I explained at that time that I would be doing the projects in chunks. They came up with an estimate.

The work took about 6 weeks. The employees were professional and courteous. The owner was very helpful and would come back and adjust sprinkler heads and always made sure we were happy. They do everything .

Description of Work
I got an estimate from Archterra Landscape Services for storm water maintenance for a sub-division, re-contouring a biosoil and cleaning out a pond.

Rob the owner first came and did a free estimate. his price was reasonable compared to other bids. His crew arrived promptly when they started and cleaned up after they were threw. Rob was helpful making suggestions and did a wonderful job.

Thank you for choosing Tung Nguyen's Landscaping. We are a local, family owned and operated business and look forward to taking care of your outdoor needs. We promise prompt, personal and professional services and unparalleled results. Call for a consultation today.  …

Archterra Landscape Services LLC is currently rated 4.4 overall out of 5.

No, Archterra Landscape Services LLC does not offer eco-friendly accreditations.

No, Archterra Landscape Services LLC does not offer a senior discount.