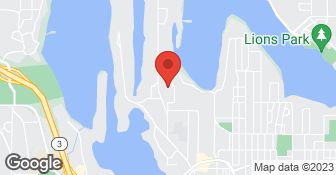 we have 5 employess. most work can be completed by creative arizona landscapes. but in some case cases sub contracting is necessary. payments are due when job is complete. installations require a deposit and financing is available....

Provided an email estimate (based on detailed scope of work and size I provided) for $280. Arrived an hour late (called ahead to say he'd be half hour late). The job was to clean up (trees, weeds, trimming, rake, blow, etc) an acre property. I should have been skeptical from the beginning when told he was coming a long way (he'd come and do the job, but not give an on site estimate), would be doing the job himself (no crew) and was a "professional who bills at $30/hr but it's worth it because he's fast and does good work". Of my acre property, maybe an eighth of it is the front yard, which he spent about 75% of the day on, raking, blowing, etc. He did trim a lot of weeds in the back yard, as well as a portion of a tree. The work he did do was fine, but a lot was left un-done. No mowing was done (the entire lot was grass, front and back). A lot of weeds were left (sprayed and left to die, but who's going to clean them up?). He borrowed a ladder of mine to trim a tall tree in the back yard, and left the ladder there instead of putting it away. He left his trash (foam drink cup) laying in the back yard, which my dogs found and shredded making a mess before I realized it. He blew all of the debris (leaves, dead grass, etc) out into my lawn and onto the street in front of the house and left it there, instead of cleaning it up. I'm expected to clean that up myself with the bagger on my mower. He did spend about a full day at the property working, and the front yard did look nice (other than the debris left on the street for someone else to clean up). But for $280, which is what was bid for the job, I expected everything to be done completely, front and back. Claiming you are a professional that deserves $30/hr because you work so fast can't be justified unless you are doing the work of 3 people. I've had similar sized properties before, and a job like this is normally done, for the same price or less, by a crew of 3-4 guys. My mistake for believing it would be completed. I had to pay another person to come out and spend the next day cleaning everything up that was left behind, bagging all the debris, etc. Had I gone with a company with the proper crew, I would have saved myself a lot of time and trouble. Jeremy may be great at some things like trimming trees or specialty work like that, but for a simple clean up job, a couple of $10 an hour guys are better suited to the task.

Dear Member, I apologize if I left you unhappy. I wish you would have called me before you brought in some else to finish what you thought was left undone. I never leave my customers if there not satisfied. You expressed no concern when i left. I would like an opportunity to come back and make it right free of charge. My number again is 602-487-6033. I pay my employees $12.00 to $15.00 an hour. Insurance and workmans comp is an additional 32% of there wages each day. You were looking for the cheapest quote and at that price i couldnt afford to bring employess especially since we hadnt aggreed on a price yet. Please be fair about this and atleast give me an opportunity to make you happy since you never bothered to contact acout this in the first place.

At Sta-Built Construction we do all we can to make your project easy. It starts with a FREE ESTIMATE.Our estimates are very comprehensive and we ensure that you will be happy with the many design ideas we offer and upgrade options. We offer special financing deals to all of our customers. Right Now you can get a 12 MONTHS SAME AS CASH LOAN to finance your project. We stand behind our projects with a strong 5 Year Warranty. Give us a call to get your project started!!!  …

We have the experience and dedication to bring your dreams to reality! We guarantee your satisfaction, and we won’t leave until the job is done right. Call or click to schedule a free estimate today! thanks for choose Bautista Landscaping have a good day 😊😊  …

We have the experience and dedication to bring your dreams to reality! We have been in business for 11 years and our Goal is your satisfaction, we bring reality where you would think isn't possible let us help you with your landscape and hardscape needs, estimates are free click or give us a call at (360)551-5287.  …

Creative arizona landscapes is a complete landscape company. Capable of handling any aspect of the job, big or small. Satisfaction is our number one goal. Servuce is our cornerstone!

creative arizona landscapes is currently rated 3 overall out of 5.

No, creative arizona landscapes does not offer a senior discount.