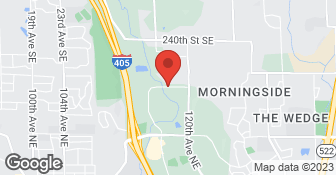 We install all types of water heaters including tank type, tank less, heat pumps and hybrids. We've been in business since 1986. Serving all of Western Washington including Seattle, Tacoma, Everett and Olympia areas. We are licensed, bonded and insured. A rating through BBB and awards from Puget Sound Energy for helping consumers save energy....

Eric arrived on time. He was very professional and a true gentleman. The company is fortunate to have him on their team.

Water heater was leaking. Eric was very knowledgeable and quickly and easily diagnosed the issue and replaced our out of warranty water heater

Fast Water Heater installed a tankless hot water heater years ago. It didn't pass inspection. The installer claimed the installation manual was incorrect, and kept delaying making fixes, claiming they were contacting the manufacturer for clarification. Meanwhile other failed inspection issues went unresolved. They stalled and stalled. I called back months later. Promises to follow up. Never did. I'm guessing they were hoping the city and I would forget, and I did, until the city sent a letter reminding me of the failed inspection. I called Fast Water Heater back, this was 1-2 years. Yes, they claimed many inspections fell thru the cracks, they had a dedicated person now, and they would resolve. Guess what? Just another excuse. Year after year, same song and dance.. Now years later they don't even bother to return calls. BUYER BEWARE, AVOID THIS COMPANY!

Could not have gone better. I am very pleased with the appearance and performance of the product. Joe gave me so much confidence that he was good at what he does! He was very kind in explaining the steps and how everything worked. I'd invite this guy and his family to dinner!

My tank went out the night before and I was unable to reach anyone for service until the next morning. I am on their lease program. Technician Chad arrived to complete the tank the next day. He was very professional, friendly, treated my home with respect and very informative. He explained the whole process and the functionality of the new tank. I would definitely recommend this technician to any friends and or family members. Thank you again Chad.

Perfect. Dave was on time and friendly. He figured the best way for us to get the old tank out and the drains installed properly. We appreciated his attention to making the drains look nice outside the house and to city code. He was a pleasure to work with. We thought the price was fair too. When I first called I actually talked to a human who was courteous and straight forward. It made it easier to decide to hire them.

Brandon was great! Called Fast Water Heater on Saturday morning and done by 2:30pm on Sunday afternoon. Didn’t try to up sell at all. Gave us the maximum value for cost, installed right away and was very efficient. “Tank” you!!

Joe was very courteous and professional. He did a good job.

David did a great job and explained everything well. He was very professional and courteous and took the time to answer questions. Although I needed a few extra items above the quoted basic install price I felt the items were warranted and reasonable. He cleaned the workspace well and the H2O heater is working perfect. -Craig