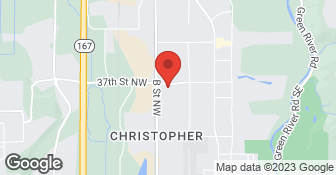 With over 20 years of experience, Gutter & Roof Solutions NW knows how to ensure your gutters and roof are working to their full potential. Roofing and gutters are part of the same system, and without both aspects being in top condition, water can penetrate your home’s interior and the soil on your property, leading to erosion and decay. Our roofing repair and installation services will further complete your home’s exterior protection. The Valor Gutter Guard system offers top of the line gutter protection, preventing debris from entering your gutters and maximizing water flow. We offer a variety of roofing materials to service all your roof repair and replacement needs, and our experienced professionals will always give you a quality solution and great customer service....

Extremely polite, professional and good clean up when complete. The entire job was completed in 1 day including removal of the old gutters and downspouts.

Description of Work
Replacement of gutters, downspouts and gutter guards

I had many problems with the original install. 4 of 5 miter joints leaked and were done very poorly, there was damage to one of my windows and to a lot of areas on my freshly painted barge board, a roof valley missed any gutter altogether, there were white fittings throughout my Linen colored gutter system, there were gaps in the Valor gutter guard and areas of the Valor were channeling water underneath the shingles along the barge board. The Production Manager, Don, contacted me right away however the conversation was very difficult. Don went on and on about people trying to take advantage of the company and came off like he was accusing me of trying to avoid paying the full agreed price. I ended up a little upset but was able to explain that I just wanted proper gutters and needed the problems fixed. Don promised that his best guy would re-do all of my miter joints, the Valor problems would be fixed, the white fittings would be painted the correct color and I would be left with some of the Linen spray paint for touch-ups. 1st repair attempt - the gutter crew showed up and had zero linen colored gutter on their truck and told me they were expecting to just be working on the Valor gutter guard. I insisted that they re-work the miter joints so they had to send a guy 2.5 hrs round trip to pick up some gutter. They spent time getting my Valor gutter guard working correctly while another guy was picking up materials. The crew replaced the worst section of gutter and the new miter joints on the replaced section look good. Unfortunately I didn't notice that one section of the gutter was sloped completely wrong. Also, the crew couldn't replicate a leak with a garden hose on one of the miter joints and ran out of time so that joint wasn't replaced. 2nd repair attempt - this went smooth, the section of gutter that had been repaired had the slope re-worked and is functioning well. Still no work on the 5th miter joint that was bad. 3rd repair attempt - I was finally able to get a video of the last miter joint leaking substantially during a good rain. I contacted the Production Manager Don again, this conversation was even more difficult. Don was aggressive and disrespectful, he told me that I need to understand the difference between "Industry Standard" and "Gold Standard" and told me I was "one of those guys that will never be happy." Talked over me during the entire conversation and literally yelled at me on the phone - I am blown away by how he chose to speak to a customer. Don agreed to have an assistant call me to schedule a service call on the leaky miter joint, during scheduling I mentioned that Don had initially told me this miter joint would be replaced by "his best guy" and she said she made a note of it. I returned home from work to find that the miter joint was not replaced, they beat the jagged edges over with a hammer and added more caulk inside the joint. I contacted Don's assistant and asked why the joint was not replaced, she had to ask around and got back to me a little later that morning - she explained that management decided the miter joint is "Up to Industry Standards" and that they would not be replacing it and considered my job complete. Currently I am waiting on two local gutter companies to come take a look and provide a quote to replace this section of gutter with a proper miter joint. I will update this review if I hear anything from Gutter Solutions NW but I fear I am stuck with shoddy work at this point. Don't spend $6,200 on garbage gutters like I did, find a reputable company that respects their customers and doesn't turn out terrible work.

The team of Corey and Matthew were great. They were very professional. They got the job done in one day. And, their cleanup was exceptional. Highly recommend.

It was fine, above average. They got here on time, did the job, and cleaned up. The price was good. They went above and beyond.

Description of Work
The put the gutters on the place.

Experience was very good. They came in to the job very professionally and cleaned everything up. There's no debris left. Excellent to work with. The office staff kept us informed in terms of the timing on when they would be here. The office staff was very responsive. Very positive experience working with them.

Description of Work
They installed new gutter, replaced fascia board and they put a new overhead on the patio cover.

We are very satisfied from initial contact through the completion.

Description of Work
We needed our roof on our home replaced.

Thank you so much for your kind review, [Member Name Removed]! It was a pleasure working with you! -Lisa A.
5.0

They did great job, especially for the gutters and roof. I will not use them again because I will be long gone before the roof needs to be replaced.

Description of Work
They replaced the vents, facial boards, ply wood, gutters,hard board and put a new roof on the patio.

Thank you! We appreciate your feedback.
1.0

It took the company 90 days to finish my roof. I had to get an attorney to speed up the process. Hal was a real bully. after the 60 day mark I called and asked him if I would be needing to get an attorney and he became very rude and unprofessional. At the final inspection he again bullied me and a neighbor of mine. I would never recommend this company.

Mr. [Member Name Removed], Going through the reviews, I see you weren't happy with our company. Your feedback is invaluable to us regardless if it's negative or positive. I sincerely apologize and if you'd like to discuss anything further, feel free to contact me. Thank you, Tracy 253.737.5062 Gutter & Roof Solutions NW
5.0

They were extremely easy to work with and very efficient. We are very happy with the job they did.

Description of Work
They cleaned our gutters, replaced 27 feet of existing gutters, and put gutter guards on the higher gutters.

Thank you! We always appreciate it when customers take the time to write a review.

We specialize in every type of pressure washing from, Drive ways, Houses, Roofing, Gutter cleaning etc. S and C Pressure Washing is a locally owned and operated pressure washing business, expanding through all parts of Washington state. We value doing an excellent job on every job site with great pricing options. For any of your service inquiries call 509-480-0627  …

Gutter & Roof Solutions NW is currently rated 3.7 overall out of 5.

No, Gutter & Roof Solutions NW does not offer eco-friendly accreditations.