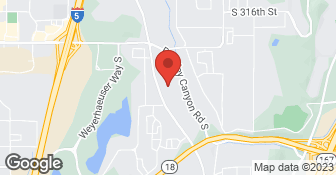 Family owned & operated. We have amazing discounts for new clients (homeowners only) we are very flexible with all of our scheduling and try our hardest to work around your needs. If for any reason you are not happy with our work we will come out and fix it for free, if we are still unable to make you happy we will not charge you a penny for the work done & if you already paid we will gladly give you a refund. Additional email - info@windowandguttercleaning.biz. See website for more service areas....

Thank you for your review
3.0

I had purchase a deal in 2014 for $109 Window Cleaning. He had called to remind me of the deal. Then charge me additional $200 on top on the deal for the window. It make it a $100 an hour for window cleaning. I thought it was too much money.

Description of Work
Window cleaning for a deal $109 Window Cleaning

I am truly sorry that you felt the price was too high for the amount of time spent. I did give you a discount equal to more than what you paid to Angi even though it had been about 5 years beyond the time that I was required to honor your coupon and you were well out of the area were I normally give discounts. I do thank you for being kind in your response and again apologize that you were not totally happy with our price, although you seemed to be happy with our work
5.0

They gave us good price with discount.

Thank you for your review
5.0

*****Five Stars and more!Very pleased with their job. They did the work (Gutters cleaned on 3 different houses) soon after we called, they were on time, AND they gave us a good price. Anthony Howard, the guy that performed the job, was hard working and did a great job and was personable to deal with. We will definitely put these guys on our list of people to call back each year to get our gutters cleaned.

James and Terri B.

Anthony was energetic and personable as he cleaned out the debris from the gutters and removed as much moss as possible from the roof. He then applied a moss treatment to the remainder. He cleaned the outside of the windows and the screens on the upper and lower floors and then finished by cleaning up the debris from the top of the shed and from the walkways.

Windows had not been done in a Very long time. They were here on time, and they didn’t complain when I added a little to the service! Windows look great!

This is the 2nd time I have hired Danny Thomas for roof and gutter cleaning. They did a fantastic job and went above and beyond by cleaning gutters that I had not requested them to do and also repairing several gutter screws. They did a fantastic job of cleaning my roof of moss and debris and also placed moss killer on the roof. Danny is a great guy and you can tell he really cares about satisfying his customers. All this was done at a very fair and low price! I will continue to be a repeat customer!

After paying $169 on Angie’s List on December 8 (debited from my checking account immediately) for gutter cleaning deal I’m contacted by email saying they want to come by and look at my house so they can give me an estimate. An estimate? Wait a minute, I thought the deal was gutters cleaned for $169. Ok, if I have way more gutters than normal it’ll cost more, ok. I’m told they can come by in 4 days (ok, after the weekend, no problem). Nobody shows. They finally come by after two weeks and say yes we should be able to get it done before Christmas and we’ll send you a text message when we’re going to come by. Christmas comes and goes, no text message, no email, no call. New Year’s comes and goes, same deal. I get an email January 9 saying they’ll be by on January 15 (a holiday weekend by the way) between 10 and 11 am. Nobody shows. At 3:30 in the afternoon they finally show up and clean the gutters. They did a good job. I would recommend these guys only if you don’t mind paying in advance, and you don’t mind having to be home just to get an actual price, and you don’t mind having to be home again when they do the job, and you don’t care if they show up on time, and you don’t mind waiting more than a month after paying before getting the job done. Otherwise I would look elsewhere.

It was fine. It was a little bit difficult to get ahold of them and get a date. They were very friendly and did a good job.

Description of Work
This was an Angie's List Big Deal for window cleaning.

Good communication. Office called the day before to alert me that the tech might be a bit late if the 1st job ran over. Tech called 20 minutes ahead to let me know he was coming. When he arrived, he surveyed the job and laid out his hoses. He put scratch guards on all the door frames and places where the hoses could scratch the woodwork. The job was done in about 2 hours and all the spots came out. The carpet looks great. The technician was friendly and personable and worked quickly and efficiently.

Description of Work
506 square feet of lightly soiled beige nylon carpet. About 100 sq. ft had grey spots from crushed cat litter that had been tracked onto the carpet. I have been unable to budge these spots with a home carpet cleaner. Also cleaned 15 carpeted stairs.

Regrettable I so want to support small, local businesses. The downside is there is absolutely no recourse when you are treated poorly and damage is done to your property. Sure, I can complain to the guys wife, but all that got me was a hollow apology. I hired this service to clean my roof, outside windows and screens. The roof went fine. The windows were ok, a few streaks, but nothing I’d complain about. What was unacceptable was the guy, Danny, trash talking me on my property and his helper, who was a young man, probably a relative, being careless when he handled the screens and tearing a large hole in one, and several small holes in another. Danny didn’t realize I was outside walking my dog when I overheard him saying it looked like there were streaks in the garden window, but that was my problem, I was “too cheap” to have them clean the inside. The streaks were on the outside. I’m not cheap, I was not trying to get him to come down in price, nor did I ask him to do the insides for the price of just the outside, I simply do not like to have strange men in my personal space, my bedrooms. It’s really none of his business and if he didn’t want the job, if it wasn’t a big enough job for him, he should have declined. And he really needs to wait until he is off a customer’s property before he trash talks them. I’m so glad I didn’t have them inside my home. With such unprofessional behavior, I really don’t want to imagine what they might have done to or with my belongings. I emailed them a few weeks after the incident. I got a voice mail from danny, and an email from his wife. I responded to the email and two weeks later, have yet to hear back from them.

Description of Work
Roof cleaned, outside windows and screens cleaned.

He did a good job cleaning. They didn't give us notice that they were coming which was an inconvenience.

Description of Work
He did a job for us two months ago. He cleaned the windows. It was a big deal for $171.

Was willing to work me in to the schedule, showed up on time, and did a great job. So glad to have that done!

Thank you for your review and your business.
5.0

Most folks wash their own windows, even me, but Danny does an amazing job! The windows look amazing! Additionally, he shared some screen tips with me that I never knew before.

Description of Work
window washing - inside and out

Thank you for your review and your business. We hope to see you again next summer.
5.0

10 times as good as Stanley steemer

Description of Work
Cleaned all of our carpets

Thanks for taking the time to post this. Also, thanks for the referral. We really do appreciate customers like you.
5.0

It took a few days to get scheduled. Then a few days before they said they might have to reschedule but we ended up needing to delay by a day anyway; then they showed up right when they had scheduled. The guy doing the work was meticulous, asked my wife to come look at what he was doing where a stain was difficult to remove a few times. They did extra work to try to get bad stains out; we had a lot of old soiled areas and stuff, it came out looking good with only a couple of places where they couldn't get the stains out. Then they left a bill for exactly the amount they had quoted me to start with. Days later I received an email saying they had corrected the bill because we were from Angie's list and Danny had forgotten to give us the 10% discount-- so the correction was about $50 less than we had been quoted. Great job, on time, for less money.

Description of Work
Cleaned all carpets-- over 2000 SF

Thank You for taking the time to post this review. We strive to make sure all work is done in such a way as to make our valued clients feel exactly what you said, that we have exceeded their expectations. We look forward to working with you in the future.
5.0

Danny Thomas ProClean did a fine job cleaning all our rain gutters. They accessed all the gutters from the roof and left virtually no debris in our yard or on our decks. I was able to schedule the service at a time that was convenient for me, although as it turned out I wouldn't have needed to be home. I would hire them again.

Description of Work
Our rain gutters needed to be cleaned out.

Thank You for taking the time to post this review. We strive to make sure all work is done in such a way as to make our valued clients feel exactly what you said, that we have exceeded their expectations. We look forward to working with you in the future.
5.0

Contacted this Danny Thomas in order to have the rugs cleaned after an Estate sale. Danny came and explained and measured the area and was very professional and courteous. Even though we did not use Mr. Thomas I would highly recommend this company to family and friends.

It went great! They went above and beyond in getting everything cleaned up and my windows sparkle. I am so impressed with this company. They were very professional and excellent at the work performed. I have signed up with them for regular care and cleaning of all of my windows.

Description of Work
They came in and washed all of my windows and skylights after a major remodel.

Kevin did a great job cleaning the gutters, checking the downspouts, and cleaning off the residual mess from the actual gutter cleaning. I plan on using this company again, without a second thought.

Description of Work
Danny came out shortly after I called, and he gave a thorough estimate for gutter cleaning. He was able to get back out to do the work just a few days later.