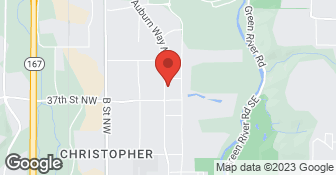 The crew was punctual and worked quickly, answered all of my questions. The inspection went smoothly with no issues.

He cut my wall and then let me know he doesn't do that work.

Grateful to Maria and Kristen for their help scheduling a call out to troubleshoot and fix our home's bathroom and landing electrical outlets. Maria scheduled a same day call out but also provided some guidance over the phone that resulted in resolving the problem. I was able to call back and cancel the call out and avoided incurring unnecessary cost. I had no idea we had a GFCI outlet in the garage, and that just needed to be reset - it had been obscured by boxes since we moved in. So two lessons learned: 1. Check your garage for hidden gems and 2. Know that the folks at Custom Electrical provide great customer care. When I have a 'real' problem I'll be straight back on the phone to them.

We called Custom to fix a broken wire that another company had failed to repair properly. Chad and Evan did a great job. They were prompt, communicated clearly, fixed the problem, and provided me with documentation on the other company’s shoddy work. The folks in the office were also helpful and accommodating with scheduling and billing. I am very happy with Custom and would definitely use them again.

[Member Name Removed], Thank you so much for your review. We truly appreciate your business. Custom Electrical Services
5.0

I've used CES twice and have had good outcomes for good prices each time. Jay Rosander is responsive and his journeymen electricians know their stuff. The last job was aluminum wiring remediation in an old home and while it was alot of work, it was done well and passed LnI no problems. Well done CES.

After approval of the quotes, an assigned electrician completed item #1 and a portion of #2, but could not complete the hot tub wiring until the new hot tub was installed. During the installation, the electrician fails to properly connect 240 volt wiring to the AC unit causing a massive short when the power was put back on. The circuit board to the AC unit got burned up causing $1100.00 in damage. When the owner is notified of the issue, he sated "Don't worry, we will pay for any damage it caused". A few days later, I received a bill for over $600.00 to add a 'light bulb' to one of the existing wiring runs. Tax was also added to all the quotes even though the written quote stated $0.00 for tax. I paid 50% of the invoices and filed a dispute with the owner regarding the $600.00 light bulb and the taxes. The owner refused to send out an electrician until I agreed to pay the disputed amounts. However, after arguing with him and having him open the quotes and the invoices, he because aware that the $600.00 was a double charge for another item and we agreed to lower it to $145.00. While we did not agree on the tax issue, I told him he needs to NOT put $0.00 for taxes if in fact there would be tax due. He stated that every jurisdiction was different and they added tax AFTER the invoices. I told him that he should still put in TAX as it is available to him at the time of the quote, but I would provide him with a resale cert if that would resolve the issue. He then recalls the $1110.00 damage to the ac circuit board and backtracks on his offer to cover the loss. Now he want to send his own ac guy out to do the repair instead. When the electrician came out a few days later to finish the hot tub connections, he stated 'Oh, we can't use these existing circuits, they are not correct for a hot tub. We should have seen this earlier but must have been too busy." he then figured another way to connect the hot tub and called the owner to explain the change required to finish. a few minutes later the owner calls me and tells me that they have to complete the ob another way and that the cost will INCREASE by $4,250.00!!! I explain to him that my quote requires them to connect the hot tub and that they cannot change prices on me because of their error. He continues to argue with me for the $4250.00 in additional fees until I tell him that if he does not honor the quote or the offer to pay for the ac damage of $1100.00, that I will be forced to contact my attorney on this matter. He then says "That's all I wanted to hear" and then hangs up on me. He call his employees on site and pulls them off the job, terminating the installation. I text the owner offering him the ability to rethink his position and to send a crew back within 24 hours to finish the job quoted. His response within 30 seconds was "We will not return".

Custom Electrical Services has been in business for 9 years and we take pride in professionalism and customer service. Mr. [Member Name Removed]' representation of our company is vindictive. He is currently running a smear campaign against our company because he wasn't willing to listen and negotiate an addition to the scope of work. Mr. [Member Name Removed] began to verbally abuse us and that is when we decided to end our relationship and his project. This situation is very unfortunate and not typical. If you are considering hiring Custom Electrical Services, we would love to provide numerous references of satisfied customers. Thank you.
5.0

They were really patient in figuring out what had been done over the last 100 years, and then upgrading it.

They did a fantastic job! Travis figured out an entirely clever way to avoid having to re-do the service panel and bring power up to the second floor in a conduit running up the outside wall. The tech, whose name I am embarassed to say I don't remember, found a couple of extra things that also needed fixing, and was able to figure out low cost ways to repair them as well. They made great efforts to come up with ways to get the wire where it needed to go while avoiding putting holes in the surfaces that would be hard to repair. They completed the job quickly and neatly, and I couldn't be happier.

Good service, and quick. They agreed to come perform this minor work, and knocked a few bucks off the bill. Missed the first appointment due to but were prompted the second day.

Description of Work
Replace a light switch with a programable one

They did really good came prompt on time and completed on time. Only thing i have to complain is they are suppose to give us dimmable bulbs which we never got them called few times and still haven't got them!

Special COVID-19 Update: We are open and ready to help! We are currently offering 24/7 emergency service during this time of COVID-19 shut downs. Lander Electric is here for your electrical emergency needs. Our service technicians' health is monitored closely, and we are using protective measures to comply with the state safety standards. Our services are currently limited due to the state regulations around COVID-19, but we are here for you to provide electric services related to lighting, heating, and food storage & preparation. If any of those systems are not working for you, we can help! As a family owned and operated business, we treat our clients and employees as we would our family.  …

AS YOU WISH ELECTRIC

Ion Electric offers reliable electrical services in the Pacific Northwest. With 30 years combined experience, we specialize in remodels, knob and tube removal and custom homes, as well as generator installs, landscape lighting all the way to large commercial spaces. We really care that are customers have a great experience and are happy with our services so give us a call today at 206-954-9975.  …

Custom Electrical Services, LLC is currently rated 4.4 overall out of 5.

Are there any services Custom Electrical Services, LLC does not offer?