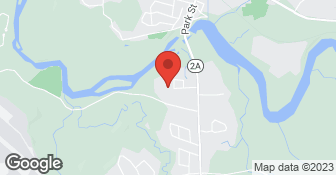 Brickliners Chimney Service is the largest and most experienced chimney service company in Vermont and Upstate New York. We focus on customer satisfaction and back our work with the best warranty in the area (10 Years). Training & continuous education is a top priority for our team which makes us best able to assist our customers needs. We offer top quality products with the lowest price in the area for the same level of service ....

Arrived on time, very professional, careful, courteous, explained what needed to be done, about how much time it would take, receptive to questions, cleaned up afterwards. Office staff is very good also!

They were courteous, on time and very professional and nice

The masonry tuckpointing and chimney crown repair seemed to go reasonable. Work was done ahead of having a new roof put on. The initial person indicated problems with the lead flashing, but the estimate left it out. When pressed, Brickliners said the "roofers would do it", but that became obvious later that it was masonry work, not roofing work. The roofers noticed damage to the flashing not apparent before Brickliners came. Now in discussion with Brickliners on this issue. The roofer also noted that in his experience Brickliners uses outside contractors; they don't do the work themselves. Hence the roofer would not recommend them. We feel like we have had the "run around" from Brickliners with charges that are not necessarily reasonable and issues not addressed.

They not only did an excellent job cleaning the dryer vent but also inspected the connection to our dryer which had recently begun to leak. They found the problem (it was related to an improper installation method by a previous service company) and corrected it. We were very satisfied with their work.

Description of Work
We needed to have a very long dryer vent cleaned.

Pleasure to work with them, very good quality work. Explained exactly what they were doing, and gave me the option of replacing the transition vent and clamps. More expensive than the association recommended, but worth the extra cost.

I called Brickliners and another company. I intended to have Brickliners upgrade my unit...then I could judge the work quality before recommending to the association. I explained what I wanted to the scheduler... to upgrade my vent pipe, and to look at some other units to see if we could get a discounted rate if we got more jobs in one building. I was called the morning scheduled...the field person said they would just do the estimates that day, not upgrade and estimates... I said fine. Again, there was no talk of charges. Two employees came.... they were polite and professional, and looked at 7 units, taking about 2 hours. Then I was told the normal charge would be $115/unit for the estimates, so over $800. I said that I was never informed about a charge for the estimates, and would not pay that much. Eventually, we negotiated down to a fraction of the cost. The office staff was reasonable and polite. We did receive the estimates, and they were about three times higher than the price of the other company for the same work. We went with the other company and were happy with the quality of the work. The people at Brickliners were professional, and I am confident they would have done a decent job...it was a miscommunication and the price that prevented us from moving forward.

Description of Work
Our condo building (16 units) needed dryer vents cleaned, and - due to changing building codes - many needed to be upgraded to solid vent pipe.

I searched for two months to find someone to repair my Mom's fireplace. I must have contacted at least 15 places. I was told it couldn't be repaired, I needed an insert the cost was around $4000 to repair it. I called Brickliners they knew exactly what I was talking about and had a tech out in a few days. When he gave me the quote I was in disbelief but scheduled it. Justin came out and did an amazing job.

Description of Work
They repaired a fireplace

The price is too high. They are good, but overpriced. The workers I came in contact with were fine. The job was fine, it was just overpriced.

Description of Work
I have used Brickliners Chimney Service. They were last here for chimney maintenance including cleaning and stuff.

Two gentlemen came out on time to do the work. They cleaned the chimney, inspected it and made recommendations. Both were professional and we would hire them again.

Description of Work
We bought this house and needed the chimney inspected and cleaned. They have been booked, but got us in when someone else cancelled.

We are a growing company and If we can't fix it, it shouldn't be fixed! We do things the correct way, taking pride in our work. We have over 30 years of experience, so we have seen just about everything! Our services range from fixing your Sink, to remodeling your entire home! We specialize in both commercial and residential. For faster service please call or text 802-324-7467  …

Brickliners Chimney Service is currently rated 4.8 overall out of 5.

No, Brickliners Chimney Service does not offer free project estimates.

No, Brickliners Chimney Service does not offer a senior discount.

Are there any services Brickliners Chimney Service does not offer?