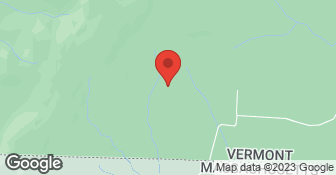 Contact me to see the text messages from the owner to see how it went.

Mr. Kelly told me it would be five days before he could fit me in, despite me sending a video of the significant leak. I had no problem waiting, licensed tradesmen are hard to come by in my area. The evening before the appointment he asked the dimension of the pipe and height of the crawlspace. He made a comment that put in doubt if he would actually do the job. When I questioned that he responded "Hey, I'm 62 years old, I don't need to be rolling around getting wet in your crawl space". I responded that I would have appreciated it if he had told me he didn't want to work in my crawlspace five days ago so I could have hired someone else to get this leak taken care of. He said he'd come and do the work the next morning "after 10am, you're an hour away and I have to get parts, which is in the opposite direction." He asked me to drain the system prior to his arrival so it would be ready to go. He sent me a text reminder at 8 a.m. to shut off the power to my water heater so I wouldn't burn out the heating element after shutting off the water. Knowing that it's rare for a tradesman to show up on time, I waited until noon before texting to see what his ETA would be. He responded it would be another hour or more, and when I asked why he couldn't have called me at 10 a.m. to tell me how late he would be, he responded with annoyance and rudeness, then said "I'm really not feeling like I want to do this job anyway." His complete lack of regard for a customer's time and inconvenience (we were without water since 10am, which I'm sure he knew about as I drained the system at his request), coupled with his unprofessionally rude response was unacceptable. I fired him, and he left me an angry 2.5 minute voice mail rant, which I deleted after the first profanity.

Description of Work
Repair a leaking pipe in a crawlspace

obviously ms [Member Name Removed] has some issues! Total misrepresentation of the facts! We did not respond to her job because of her rude comments to the Owner. She has some serious code violations which has been reported to the state and town. We reserve the right to not service people who display abusive behavior. Any further comments by this person will be met with a lawsuit!
5.0

Price was a little higher than we wanted but his work speaks for itself. He gave us multiple options of improvement and let us dictate which choice worked best for us. He started a few days behind schedule but his crew worked diligently to complete the work on time...even a day or two earlier than originally planned. He kept us up to date with all the work being done and if a problem arose, called right away when we were not on site.

Description of Work
We needed a radiant flooring system re-done and made more efficient. And we wanted to add an extra 1/2 bath in the basement.

Very smoothly. He came when promised, and called that night to tell me how things went. He followed up with written description of work done, and some suggestions for additional items.

Description of Work
John took over for another vendor and did annual cleaning and adjustments on both our condos at Mt Snow. He also added antifreeze for the first time for one of the units, and made recommendations for possible additional non-critical items. He came when promised and provided a report of what was done.

John, the plumber, did a great job at a great price and I recommended him to my friends.

We are here to make all of your visions for the perfect home a reality for a fair price! We specialize in handyman services, home repairs, remodeling for your home, business, bathrooms, kitchens, finishing basements, home additions, stone walls, hauling of items (such as equipment / vehicles), and more! We guarantee your satisfaction, and we won’t leave until the job is done right. We pride ourselves on the quality work we provide, while delivering great customer service! Check out all the services we offer below and call -or- click to schedule a free estimate today!  …

From interior/exterior painting, carpentry, landscape, hardscape and so much more, customer satisfaction is always our top priority. Sure Time Contracting are Masters in Consistency and Quality.  …

Insured
All statements concerning insurance, licenses, and bonds are informational only, and are self-reported. Since insurance, licenses and bonds can expire and can be cancelled, homeowners should always check such information for themselves.To find more licensing information for your state, visit our Find Licensing Requirements page.
General Information
Free Estimates
Yes
Eco-Friendly Accreditations
No
Payment Options
Check, Visa, MasterCard, American Express
Emergency Service
Yes
Warranties
No

No, JEK Plumbing Heating & Cooling LLC does not offer warranties.