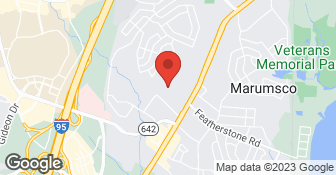 I am on every one of my jobs. We hold the old time values of quality work and customer satisfaction. We only use quality products. After 25 years of experience in concrete and construction we became the Maryland distributor and stamp contractor trainer for Stampcrete products. We provide free estimates. We except cash, checks and major credit cards.  …

Specializing in landscaping, tree service, and concrete! We always guarantee your satisfaction and won’t leave until the job is done right. We take pride in ourselves and on the quality work we provide, while always delivering great customer service! Check out our services offered, then call --or-- click to schedule a free estimate today!  …

Very poorly. Contractor promised pristine work when selling overlay and then gave excuses as to why there were numerous defects. Contractor seldom on site, and then it appears he used a sub-standard or incorrect sealer which led to very apparent water stains with bathtub rings. Contractor's 'professional' response was to take no responsibility and then offered to fix at a price that was higher than the original quote. Avoid this contractor.

I was pretty satisfied.

overall it went very well -- both the original scope of work and the extras i asked for. i had asked other contractors along the way if they had any ideas about the bathtub and no one ever even had any suggestions. so i was really pleased that they came up with a viable idea and executed so well.

Description of Work
i had recently renovated my unfinished basement into a rental apartment and used lots of concrete -- stained polished concrete floors, concrete countertops and kitchen sink, and concrete paneling/stucco for the tub surround instead of tile. a few months in to the rental it became clear that the plumbing pipes had not been laid properly and we had to tear up much of the concrete floor to repair the plumbing underneath. the result was two large, ugly patches of unpolshed, unstained concrete that needed to be blended in somehow with the original floors. the original concrete contractor was unresponsive so i called concrete artisans (josh anderson). he was immediately responsive, asked a lot of questions and answered a lot of my questions. within a few days he came out for a site visit and proposed an overlay of new concrete over the entire kitchen and bathroom, with a small threshold from those areas to the other rooms. the next day he gave an estimate, which was reasonable compared to the cost of the initial job. we agreed on a price and a start date and all went according to plan, and the overlay looks absolutely fantastic. the original contractor had also left the front and back steps unfinished, and josh installed stamped concrete to complement the color and style of the rest of the apartment, which looks great. while they were here i had the chance to ask about some finish details that the original contractor had left hanging -- mainly around the tub surround. there was no seal between the paneling and the tub, and the edges where the paneling met the walls were completely unfinished and rough. i pointed this out and only asked for some ideas for how to address these unfinished details and josh went above and beyond in finding solutions. they found a thin vinyl piping that could be caulked around the seal, and vinyl trim that matched the style of the rest of the apartment, and figured out some creative ways to install it. the end result looks terrific; they turned what looked like a pretty amateur job into something that looks much more polished and professional. it also now has a tight seal so now i have no worries about water getting behind the tub surround. another problem that developed from the original work was a crack in the kitchen sink, which josh fixed. cost for all these extras was minimal, espeically compared to the amount of effort and expertise that went into it.

I hired Josh to pour a simple 10x10 concrete pad in my yard that was to become the floor for a dog kennel. The job started off well when he showed up on Saturday only a few hours after calling him but that's where his efforts to please ended. The job only took two days and all of the work was done while I was not home which was my biggest mistake as I would have caught almost all of the problems. Like I said this job was simple and as for the the actual physical work done I would give him a "C". He did make a 10x10 square. The problem was with his workmanship and professionalism. No effort was made to clean up the extra concrete that seeped through the molds into my yard or smooth out the edges after the molds were taken off. This left for a very sloppy looking pad of concrete. The sloppyness carried over to the way he treated my yard. Here a list of things I came home to after the "Concrete Artisans" work was done. Trash cans knocked over into my neighbors driveway. Yard gate left open. Hose left laying out with white residue from cleaning tools all over my black mulch. Metel stake used in mold laying in my grass. Dried concrete splatter all over my wooden fence which was next to the pad. Hundreds of pieces of dried concrete in my yard. (So much that I had to rake it for an hour before I could cut the grass.) Roots from a nearby tree that were dug up while making the base were left in a pile in my yard. And the one that put me over the edge. A "Big Gulp" and lunch leftovers sitting on my patio. After I came home to find what I believed to be an unfinished job (as clean up is part of the job in my book) I called josh. He sounded sincere when he told me he would come out to clean everything up and smooth out the edges on the pad but he never showed. I called a few more times and left a few messages but got nothing. I guess he didn't mean it when he said "I'll do whatever it takes to make it right."

I hired Josh of the Concrete Artisans to install a stamped concrete patio. It was the most difficult experience with a contractor that I have ever had. It took 9 months to complete a project that was supposed to take 3 weeks (plus any delays for weather). Throughout that time, communication with the Concrete Artisans was often difficult, they failed to follow through on a number of promises and issued a number of misleading statements, they disputed the details of the work that were discussed and used the vague contract they wrote to increase the price, and they tried to take shortcuts when they did finally start the job. There are other highly rated stamped concrete contractors on Angies List and, in hindsight, I regret not choosing one of them. Here are a few of the issues I experienced: Early on in the process, Josh suggested that I see examples of his work to help decide on a pattern. At least three times over a four week period, he promised to call with the addresses and failed to do so. The contract stated the job would be completed in 3 weeks. Since there had been very few days of rain, I called to check on the status of the job after 4 weeks had gone by. I was told it would start in a week or two. After another month I was told the same thing. A few weeks after that I was, once again, told work would start in a week. It finally started after I called requesting cancellation of the contract after over 3 months had passed since signing the contract. By then, it was winter and, to be fair, winter weather and spring rains contributed to additional months of delay. The contractor exhibited poor attention to detail and failed to keep track of the project plans. When work did start, they dug out the patio area using the wrong dimensions and design. They tried to get away with taking shortcuts, such as not removing an existing patio, which was required to get the correct depth, and only did so when reminded this was specified in the contract. The contract called for the patio to be installed "per customer agreement and plans." The estimate and those plans clearly included discussion of a border and the contractor even provided a sketch of the patio with a border. However, he later argued that since it was not explicitly stated in the contract, a border would be an additional charge. (I learned my lesson about including every detail in a contract.) After the project was completed and payment received, Josh asked me to call him if there were any bubbles in the seal. So, when there were bubbles, I called (twice) and he promised (twice) to come out a fix it. He never did. In the end, after all of the hassle and delay, I believe they did a decent job on the patio. I understand stamped concrete is not perfect and that there will things like chips. Some things should have been better: they checked the slope of the newly poured concrete with a level (nice) but failed to smooth out the mark left by the level (bad). Finally, when I first saw the finished patio, the first thing that Josh said was, "I am not responsible for the sides of the patio. It says so in the contract." What!?! You're not responsible for the work you just did? Actually, it does not say that in my contract. The sides looked bad in spots; I think they did not have the correct form on hand to round the corners and the improvised solution came out badly, Whatever the case my be, is that the kind of attitude you want from your contractor?