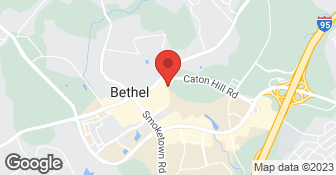 America’s Best Contractor (ABC, Inc.) is dedicated to acting in your best interest. We specialize as your General Contractor, freeing up your time so that you can spend quality time with your family or business, as opposed to you dealing with residential projects, problems, and issues that will reoccur throughout your home ownership. A One-Stop Shop where ALL work done in the entire home can be addressed by one company that has earned your trust ABC, Inc., started out as Peyton Custom Homes, back in the 1940’s, building custom, quality homes in Northern Virginia and the District for returning war vets. Through 3 generations, our core values have remained the same – to produce the highest quality product possible at affordable prices....

Very well. Everything was done to standard, and on time.

Description of Work
Installation of a microwave and a ceiling fan, repair of a fence post, fixed a door jam, some other small jobs.

Basement (approximately 1200 sq ft) was completed in year (2015). Finished basement comprised of 3 rooms and bathroom. We continue to have plumbing problems until this year. Initially a whistling noise in the pipes was said to be air in the pipes. After being told that the problem was air in the pipes and how to fix it, we tried to no avail to clear the problem. ABHI's plumber came out to observe and he informed us that a piece needed to be installed. Javier, the owner, told us that to repair the problem, we would have to pay more money but that he would split the cost with us. We contacted WSSC. They came out and adjusted something on the piping-free of charge. We contacted ABHI again with another plumbing issue at the installed commode which bubbled and made noises and gave off nauseous gassy fumes at the commode and bath tub when the washing machine was running. When speaking with Javier, we were told that the plumbing was inspected and passed and therefore the additional problems that we are experiencing would be an additional charge to repair. This hardly sounds like it should be the case when none of these problems existed prior to ABHI's plumber finishing the bathroom. Finally, Javier sent a plumber to our home to correct the problem this year and once the work was complete told the plumber to bill us for the work. This despite the fact that these problems only existed from the time ABHI completed the work. This is very unprofessional that Javier would approve work to be done on our home, without notifying us that the expense would be ours. Again, we only found out at the completion of the work what the cost was and that we were going to be asked to pay for it. The plumber still has not been paid in full. Additionally, communication was a continuous problem throughout the project which lasted approximately 5-6 months as opposed to the 2-3 months originally projected. The electrical, framing, drywall, and flooring were completed satisfactorily. Also, when we purchased items for the project (eg. bathroom vanity), Javier was willing to reduce our price by the budgeted allotment for the items since he did not have to make the purchases. All prospective clients: Be very cautious about this company because all fees may not be included in your given price if you experience similar problems after you have made final payment.

It went very well. It was a good experience. They were on time and they did very good work. They worked with me. They probably had to do a little more but they did it for the same price with the original contract once they got into it. So that was good. I didn't go with cheaper ones. I looked at some other folks and I just liked what they said better. They were very professional.

Lou was very professional and obviously very knowledgeable. When we are ready to make these repairs or have any other work done, we will definitely call him again.

Description of Work
Lou Peyton performed a thorough inspection of our foundation and the rest of our home to assess some cracks that have developed recently. No immediate repair was required, and Lou did not charge us for the inspection. He addressed our questions and explained everything very well.

We had water coming into our basement recently, and Americas Best Contractor quickly scheduled our job and repaired the problem. They dug out around the foundation and sealed the area where water was coming in. They left the work area looking better than they found it! The team arrived when they said they would be here, and they went straight to work. They took great pains to find exactly where the problem existed. They went the extra mile and did the job right. They took the time to talk to me, and they kept me informed about what they found and how they corrected the problem. We appreciated that they covered their shoes when they came inside to examine the area where the water had come in. The team was knowledgeable, prompt, courteous, and professional. I would highly recommend this company to anyone who needs their service.

Description of Work
Repaired a foundation leak in our basement.

Bonded
Insured
All statements concerning insurance, licenses, and bonds are informational only, and are self-reported. Since insurance, licenses and bonds can expire and can be cancelled, homeowners should always check such information for themselves.To find more licensing information for your state, visit our Find Licensing Requirements page.
General Information
Free Estimates
No
Eco-Friendly Accreditations
Yes
Payment Options
Check
Senior Discount
No
Emergency Service
Yes
Warranties
Yes

Americas Best Contractor is currently rated 4.6 overall out of 5.

No, Americas Best Contractor does not offer free project estimates.

No, Americas Best Contractor does not offer a senior discount.