All In One Moving & Storage 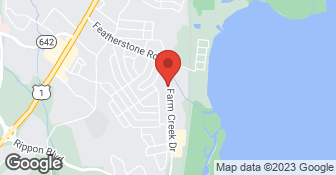 This was absolutely the worst move that we have had during our 8 military moves! It started with the people packing us showing up on the first day at noon and leaving at 3. The next day nobody showed up and we were told the person packing us had a headache. On the third day the office promised us a team of people to pack us and one lady showed up along with a person who was brand new and never packed before. On the fourth day when all the packing was supposed to be done we were promised a team of people to finish the packing and a team of people to load us. One lady showed up to finish the packing and 4 guys showed up to do the loading. Out of the four guys two of them were brand new and have never loaded before. One was the owners son who boasted that he has been doing this since he was 10 years old. One guy stayed on the truck all day to stack the stuff to be loaded. The owners son stayed upstairs saying he was wrapping the furniture all day. My leather couches came down the stairs without cloth wrap and were wrapped in paper. This resulted in the arm getting ripped off my leather couch. There was no protection on the floor to safeguard from damage. The hardwood floors had serious gouges in them and a banister on the stairs was broken. My wife's kitchen table that cost 2,000 dollars and has made it through several moves without a scratch was completely damaged and the corners were dented. The entertainment center that has made it through a couple moves without a scratch was damaged and had the handle to the cabinet door completely fell apart. The owners son never made a part box to put in the screws and other hardware to piece our furniture back together and they were scattered all over the place. On all 4 days we were being packed and moved, the earliest anybody showed up was noon when we were promised they would arrive by 9 am. The office told us we should feel lucky we were being moved, because many people did not get moved when they wanted it. I felt really lucky to watch my house damaged and all my furniture get ruined! When the movers got to the new house to unload our stuff, we were promised they would have runners for the floor and they would arrive at 9 am. Again, it was a lie. The unloaders showed up at 1pm and had 1 dirty oil stained runner and the rest of the floor was unprotected. The oil stained runner dirtied our freshly cleaned carpet and after the unloaders left their were oil and grease stains on the carpet throughout the house. The people unloading us had an attitude and did not want to put stuff back together that was taken apart at the orgin of the move. When the did put our stuff back together they did not do it right and we had go behind them and finish putting the furniture back together ourselves. I do not recommend these movers and they are a disgrace to hardworking movers who work hard and do it right! If you are military and get All In One Moving and Storage, please save your furniture and refuse them!

Description of Work
This was the worst moving experience I have ever had. First my shipment was lost, then it was late and the company said they were too short staffed to deliver my belongings. Items missing, broken. Worst experience ever.

This was for a DOD move. The man who came to our house for the walk-through was very nice. Our move was scheduled to be a two day pack and one day load. They showed up on the first day to pack at 12pm and worked until 5pm. Second day they showed up at 10am and worked until 6pm. They should have been done on second day but had to finish packing for a third day which lasted from 10am to 7pm. The packers were very slow and spent quite a bit of time on their phones. On loading day the driver showed up after 12pm and two of their employees that were to assist loading, quit before they arrived so the additional help (one person) arrived 2 hours later. Once the driver and the one employee began to load it was going well. They sent additional help approximately an hour later (one more guy) and then around 5pm more help arrived. They were loading until about 9pm. Some of our furniture needed to be disassembled but the screws and hardware for many pieces were not placed with the furniture. Our scheduled move delivery date was July 30 but no delivery arrived on July 30. After numerous phone calls they rescheduled the date. This should have never happened in the first place. There is a reason you fill out the paperwork with a date of delivery. It does not take a genius to figure that out. Seven days later we receive our household goods in two rental trucks, not the original trailer that our goods were loaded into at the origin. As the trucks were unloaded may items would fall because of the precarious way they were re-loaded into the rental trucks. We have several broken items and missing pieces. My daughter's bed is broken and missing slats so she has no bed at this time. Several times my husband had to use his own tools to assist putting some items back together. We have moved 8 times in the military and this company failed to do a good job. It was not even an average job. If we ever have to move again I will make sure we do not get stuck with All in One moving.

Description of Work
Provider packaged household goods and loaded them into a truck.

Statement on Express Moving and Storage and Covid-19: Due to the recent rise in COVID-19 cases in the country, we want to assure you that we are putting the safety of our customers and team members first. We’re following all best practices and guidelines using proper precautions and safety measures as we continue to move forward. We are still operating as trucking is currently considered an essential business in the DMV area. To help stop the spread of COVID-19, we are taking extra safety measures, including regularly sanitizing trucks and equipment, using hand sanitizer throughout our moves, and strongly encouraging our movers to use enhanced hygiene practices, including frequent hand washing and social distancing. If any of our movers are experiencing any cold or flu like symptoms, they will not be permitted to come in to work. If you have any other questions regarding scheduling a move, a move you already have scheduled, or information surrounding COVID-19 (Coronavirus) and our business, we encourage you to contact us anytime at 571.332.9682. Angie's List Super Service Award Winner from 2015-2021. Established in early 2013, Express Moving and Storage is a full-service residential moving and storage company that prides itself on high quality work, superior customer service, professionalism, and reliability. As a full service moving company, we offer residential and commercial moving, packing services, hauling, donation, as well as organizing and downsizing. Co-owner, Robin Boldt is a lifelong Northern Virginia resident with over ten years experience as a mover and manager for Quinn's Auction Galleries in Falls Church, VA. Co-owner, Cesar Arita has nearly ten years of hands-on experience as a full-time residential mover in the DMV area and also has had the opportunity to work for Quinn's Auction Galleries as a trusted mover for two years.  …

Frequently Asked Questions & Answers about All In One Moving & Storage

How is All In One Moving & Storage overall rated?

All In One Moving & Storage is currently rated 1.5 overall out of 5.

What days are All In One Moving & Storage open?

All In One Moving & Storage is open:

What payment options does All In One Moving & Storage provide

Does All In One Moving & Storage offer free estimates?

Yes, All In One Moving & Storage offers free project estimates.

Does All In One Moving & Storage offer eco-friendly accreditations?

Yes, All In One Moving & Storage offers eco-friendly accreditations.

Does All In One Moving & Storage offer a senior discount?

No, All In One Moving & Storage does not offer a senior discount.

Does All In One Moving & Storage offer emergency services?

Yes, All In One Moving & Storage offers emergency services.

Are warranties offered by All In One Moving & Storage?

No, All In One Moving & Storage does not offer warranties.

What services does All In One Moving & Storage offer?

All In One Moving & Storage offers the following services: Commercial and residential moving & storage facilities.

Are there any services All In One Moving & Storage does not offer?