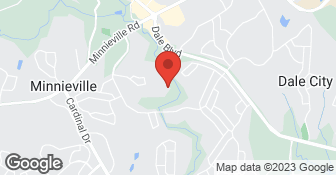 Tyrone had performed some work for us in the past. We needed to have a small section of chain link fence repaired when a tree came down on it. Tyrone came out promptly and fixed it. It looks great!

Description of Work
Fixed small section of chain link fence damaged by tree that had fallen on it.

Tyrone showed up on time to do the estimate. He was not the lowest estimate we had but he was not the highest either. We did not go with the company with the lowest estimate because he cancelled four times before he came out and Tyrone did not. Originally Tyrone was going to install a new 50 foot section of chain link fence with a gate and fix three sections of broken chain link fence plus some repairs to our soffits. He was going to charge $1900 for this. However, before the day he was to start work, a tree came down in our yard and crushed a large section of our front fence. He also fixed this fence for an additional $1250. The fence and repairs were well done and Tyrone even did a couple of extra things for no charge. He was very pleasant and left the site clean. I would hire him again.

Excellent customer service. Tyrone came out for a same day estimate, sat with us, and mapped out exactly what we wanted. The turn around time from contract to installation was only a week. The entire crew was friendly, and a pleasure to work with. They cleaned up impeccably, if it wasn't for a the fence, you'd never know we had a yard full of contractors! I would absolutely recommend them to friends and neighbors. The fence is beautiful, the workmanship is top notch, and they completed everything in a timely and professional manner.

Description of Work
I used the services of 1st Choice Fence & Home Improvement. They put up my fence.

Tyrone was wonderful to work with. The project was completed without any issues and completed early! The fence looks amazing! I highly recommend using this company. The prices were very competitive and the finished product is amazing. Stop searching and call 1st Choice today!

Description of Work
Fenced entire back yard of my SFH with 6 foot board by board wood fence.

Tyrone arrived on time. He provided us an estimate that was very fair and competitive. We chose to use him since he was a single source provider, and not associated with a big company. He arrived to do the install. He installed all of the posts with concrete. He came back and then installed the fencing itself. Our expectations were highly exceeded, and we were very happy. We were so happy with Tyrone, that we have asked him to do some more work for us. We would highly recommend 1st Choice Fence and Home Improvement LLC.

We are TruBlue of South Fairfax, a total house care provider to take care of all your home maintenance and repair needs. We pride ourselves on professionalism and care for our customers. Just tell us what you need done whether it's carpentry, drywall work, door installations, minor renovation of kitchens and baths, repairs or a helping hand - we are here to take the to do list off your hands so you can get back to doing the things you enjoy.  …

From our initial meeting to the completion of your project, our number one goal is to exceed your expectations. We install economical projects with great resell value along with large outdoor living staycations. When you choose to work with us, you get a project manager to communicate important information and oversee the installation of your project. Before we can begin construction, there are many tasks that must be completed. We do this efficiently by using project, customer service and communication tools and technologies along with a great staff that all share the same vision of excellence. Below are the steps we take to ensure you are 100% satisfied with your choice.  …