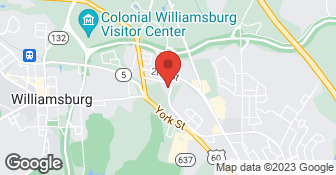 Never even contacted me

We have a 11 year old shower installation with two shower heads and four personal jets - any of these can be independently regulated with another mixing valve for water temp. The mixing valve would only give extreme hot water and one shower head did not work. I tried four other plumbers and none would even attempt the fix; neither Lowes nor Home Depot would either. Finally called Boswell - as the unit's foreign made parts were difficult to find and initially wrong parts were sent. After three visits and multiple parts Boswell repaired it. They stuck with it, refused to give up and finally did fix it vs. the other plumbers who would not even try. Only other alternative was complete replacement of the installation which would have required ripping out the tile on two walls and a completely new hardware! I did not even price that out.

The person who answered the phone said she would have Rich call me. He did later that Monday and set up appointment for Thursday. Dan and Matt arrived a little early and the Toilet flapper was repaired quickly. I asked Dan if they could replace my 40-gallon water heater and he said yes but would be cheaper to replace with a 50-gallon water heater. He checked with Rich to see if they might replace it the next day and it was put on their schedule. A new 50-gallon water heater was installed the next day in a timely manner. I now have plenty of hot water. I could have gotten the water replaced for less but was confident Dan would do a professional job.

Description of Work
I needed toilet flapper changed. I also had them replace my gas water heater.

Description of Work
None. Called of 7-6-16-NEVER returned my call.

Description of Work
In response to suggestions made in a home inspection: |Repaired leak in copper pipe under the house; checked toilets and repaired one; secured copper pipe on deck spigot and stabilized other spigots in brick work, recommended replacement of some of the faucets in bathrooms when remodeling.

Description of Work
Very friendly and professional. Converted our wood fireplace to gas fireplace. Came out and gave us an estimate and recommended dependable place to purchase our gas logs. Arrived promptly as scheduled and completed the job in a timely manner, making sure everything was working correctly before they left. Would recommend using this company.

Description of Work
Replaced outside central AC unit and inside coils.

I was disappointed in the proposal. I thought after the proposal I would get a list of equipment that they'd installed. I didn't get that and I was unhappy about that. I still to this day do not have a listing of the equipment they installed without going down there and looking at it. We were kind of in a bind and it was in the fall. I just wanted to get the thing done. When you get a quote you ought to get a listing of the equipment they plan to install so you can check to see what you ordered. They didn't really pass inspection.

It was a good experience. Boswell came on short notice, diagnosed the problem and provided a cost estimate. Boswell replaced a switch and added freon. They also checked all of the filters.

Description of Work
Replaced a switch in the air condition unit and added freon.

Their service has been excellent. They are very responsive and have replaced water heaters, air conditioning systems and furnaces for us throughout the years. The units that they put in last April were expensive because we have a big house. We have always had an annual maintenance contract with them. They usually get back to you and fix anything right away. We would not use them again since we have just moved last week.

Description of Work
We used Boswell Plumbing & Heating in April for the replacement of both indoor and outdoor air conditioning units.

The plumber was unbelievable, he was unreal, and he was so good. He is extremely competent, technically. He is a master plumber and a master electrician. He is very bright. He invented the latch that closes at the top of the hotel door and that is how smart he is. Other plumbers couldn’t figure out what my problem is but he did. He is a genius.

Description of Work
I used Boswell Plumbing & Heating for plumbing and electrical work.

I've used them for 5 years. They are very responsive and I think their prices are fair.

Description of Work
I used the services of Boswell Plumbing & Heating within the last month.

Very pleased with every aspect of the jobs completed. Timely professional service. Cost was a bit higher that other bids but they came highly recommended by friends and I was very pleased with the results.

We had an annual contract for service calls and did not feel the units were being properly maintained so we discontinued the contract and called in a different company that had been highly recommended. They found very dirty factory installed filters in both units that we were not aware of and that should have been removed upon installation because our home has several inputs with filters. I was upset that Boswell had not removed, replaced or made us aware of these filters. Both heat pump units and the water heater that were installed are still running and have given satisfactory service. No apparent damage to the units has occurred.

Description of Work
This company has installed a water heater as well as two heat pump units in my home.

I used to use another provider before, but then I switched to Boswell Plumbing, as the other company was expensive and it was hard to get a hold of them. Our hot water heater went out and ruined the whole floor. So, we had a lot of construction work done at the same time by a contractor. Boswell was the first person who we knew since he was honest and fair. So, I didn't have to look in for him or get any word of mouth, but he had not done anything for me until then. There were several people involved in repairing the area where the water heater had to go. So, I am not sure if the price charged was only for his work or if it included the work done by the other guy too. I think that the price was for the new water heater and also for his labor. He came out right away to take care of the problem. He ordered a new water heater for us and put it in. His answering service man calls you back to confirm the appointment once you call him and leave a message for him. He would then set up an appointment to come out. He does show up at the designated time and it was only once that he didn't show up. So, I don't know if that was because I wasn't going to be there. I had some faucets that had hoses for my washing machine which had some problem and it wouldn't come out. So I asked him to come out to fix the problem and I had to replace the hoses. He agreed to come out about a week later, but he never showed up. I never called him back, as it wasn't an emergency and I can replace the water hoses anytime. I have got some more work for him to do. We also have to get our furnace replaced shortly. He was good and was prompt, as he used to come right out. He is more prompt in case of an emergency situation. His prices were fair, but lately I think he has got a little overwhelmed or grown too big for his job. I think he has a front desk and an assistant working for him now. So, it's really hard to get him to come out and it's hard to make an appointment too. It seems like he has got very busy nowadays and handles the emergencies first. However, he does good work when he comes out and I am sure he is now within the price range of whatever the industry is charging for the type of work that he does. I initially started using his services, as he was less expensive than the other company and he is a little more dependable. I am not sure about his current rates and I know he doesn't overcharge. The quality of his work is good and he is thorough. He doesn't leave things undone and you don't have to call him back to say that he forgot something. I have had him come out several times. The reason why I actually got a hold of him was just for annual furnace check up and to make sure that it is ready for winter time. He is good when it comes to his punctuality, as he shows up on time. He usually shows up when he says he is going to show up. He comes right around 9 o'clock if he says that he is going to be there at 9 o'clock. I will use his services in the future too.

Description of Work
I used the services of Boswell Plumbing for my plumbing needs. The plumber came out last about several years ago to fix my hot water heater.

Hampton Roads Water Services provides residential and commercial plumbing and water treatment. WE OFFER FINANCING IF NEEDED! We are fully licensed and insured and guarantee our work.  …

Fully Licensed Electrician offering services at a fair pricing. We are on time and reliable and will get the job done right. Neat and workmanlike manner and we do quality work. Please contact us today to address all of your electrical needs. We are a certified Generac Dealer and warranty provider and maintenance.  …

There are a lot of ways you can make your home or business electricity more efficient and more effective. Governor's Electric is your go-to local electrician for all kinds of electrical installations and repairs. You can count on us to get to the root of the problem and provide the solutions you need.  …

All statements concerning insurance, licenses, and bonds are informational only, and are self-reported. Since insurance, licenses and bonds can expire and can be cancelled, homeowners should always check such information for themselves.To find more licensing information for your state, visit our Find Licensing Requirements page.
General Information
Free Estimates
Yes
Eco-Friendly Accreditations
No
Emergency Service
Yes
Warranties
Ask for details

Boswell Plumbing & Heating is currently rated 4.7 overall out of 5.

No, Boswell Plumbing & Heating does not offer eco-friendly accreditations.

No, Boswell Plumbing & Heating does not offer warranties.