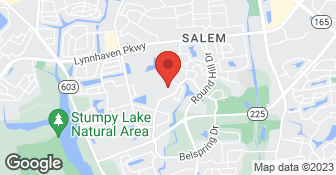 VA #2705 126392. We are proud to be your Home Improvement Company in ALL of the Hampton Roads greater metropolitan area, the Peninsula, Gloucester, VA, and surrounding counties.

Very refreshing to have a contractor not try to sell you unnecessary work.

Description of Work
Carl came out to inspect our floors/foundation to see if we needed to have work done. Was very thorough in his assesment and explanation that everything was fine, we just had a cosmetic problem.

The flooring was Duraceramic tile by Congoleum. Carl Wilson, the contractor, was given manufacturers installation instructions at the contract signing and when he was given the tile. He deliberately ignored them. When he started installing the flooring, he ran out of adhesive after laying approx. 50 sq. ft. When I realized this, I called him. I pointed out that the original adhesive would cover 200-250 sq. ft. and that he was applying it too thick. He denied this. Before we finished talking, he asked me in a very belligerent tone of voice and quot;What's your problemand quot;. The tile were not laid in the correct pattern. The manufacturer also stressed rolling the tile after they were laid. This was not done at all. The wall over the new sink was not prepared properly. It was uneven. The tile back splash was uneven. I don't think that Wilson knows how to install wall or floor tile. We will eventually have this back splash replaced. He takes no pride in his work. The kitchen cabinets were hung incorrectly. Two weeks later they were hung right (with the exception that one cabinet was hung upside down). Two weeks later still, the crown molding was installed. One cabinet had four drawers. He drilled the holes for the handles incorrectly and attempted to cover it up. We discovered this and new drawer faces had to be ordered at his expense.. The color and type of the trim first installed around the door and window was wrong. It had to be replaced. Wilson installed a new electrical receptacle on the wall near the stove. When the stove was put into place, the receptacle was blocked by the stove control panel. My wife pointed this out to him. He told her that if she told him to move the receptacle he would. Otherwise he would not. She said move it. He did. He charged $250 to vent the clothes dryer to the outside. Then he ran the exhaust line over to a foundation vent and left it laying there. After it was pointed out to him, he made an excuse but, later vented it properly. The demolition material (old cabinets, flooring, etc.) was left piled in the backyard for almost the duration of the project. At the contract signing, he said he was going to have a container to put the debris in. The start date of the project was 15 July 2012 with an approx. completion date of 14 August 2012. The project was finished on 21 Sept 2012.

Description of Work
Kitchen remodel. New cabinets, countertops, backsplash, flooring, appliances, window and door trim. A doorway in an adjoining laundry room was closed up and a clothes dryer installed. This was mainly a labor contract. All of the major components were provided by the owner. This house is rental property.

We responded to every request this customer required. It is our policy to check with customers before making changes to the original plans. We will continue to do this. My carpenter made an error with 4 drawers. We replaced them. We have a method that we use for tile floors. This uses more glue than required by manufactures. This ensures our tile does not move. However, we do not charge the customer for this service. The building refuse was neatly piled in the back yard, out of site, until the job was completed. All was removed. However, my tile person did put up a wavy wall using 1 inch tile on the back splash for the kitchen. I gave the customer the option of us redoing the wall or I would re-imburse them. They chose the re-imbursement.
2.0

They weren't responsive to my inquiries, however, and they seemed very unprofessional.

Description of Work
I called them about installing an asphalt driveway.

This is a job we decided not to do. I am not sure why the owner is complaining. We visited and decided this was not a job for us.
5.0

Carl (owner) was very punctual with his estimate and start time and date. He drew up an appropriate contract and started on time. He was very professional and our overall experience was outstanding. Even when we wanted to change something after he had already installed our shower, he complied with no problem. He even did extra things that weren't in the contract (installing insulation and an exhaust fan) and didn't charge extra for them. We had a leak after he was done, which was our fault, he came and fixed it without question or charging us. Great, great experience and we will be using The Kings Men in the future and recommending them to everyone we know.

Their pricing was very fair. They were terrific. They were very responsive. They were very professional. They procure a contract outlining the specific jobs that they are going to perform and what the cost will be. It is all very clear about what one is going to get. They fulfill all of the aspects of the contract in a very timely fashion. We are planning to have them come back in the spring for some additional work.

A TRUE gentleman! We hired The King's Men to make over the lobby of the Precision Tune Auto Care in Newport News and could not have been happier! Carl was always on time and responsive. He provided an accurate estimate, excellent service throughout the entire process, and quality work. The King’s Men- the name says it all- top class!

Special pricing for Bathroom and Kitchen Remodels. We offer complete home building, home improvement, remodeling, room additions, flooring, walls, doors, windows, lighting, electrical and plumbing. For those of you who are new to us, we are a licensed General Contractor with several generations of accumulated experience. We offer every conceivable service and skill with a host of affordable payment options. Working with you is our ultimate goal.

We do not do bathtub liners.

How is TKM HOMES - The King's Men, LLC overall rated?

What days are TKM HOMES - The King's Men, LLC open?

No, TKM HOMES - The King's Men, LLC does not offer eco-friendly accreditations.

No, TKM HOMES - The King's Men, LLC does not offer a senior discount.

Are warranties offered by TKM HOMES - The King's Men, LLC?

What services does TKM HOMES - The King's Men, LLC offer?

TKM HOMES - The King's Men, LLC offers the following services: Special pricing for Bathroom and Kitchen Remodels. We offer complete home building, home improvement, remodeling, room additions, flooring, walls, doors, windows, lighting, electrical and plumbing. For those of you who are new to us, we are a licensed General Contractor with several generations of accumulated experience. We offer every conceivable service and skill with a host of affordable payment options. Working with you is our ultimate goal.

Are there any services TKM HOMES - The King's Men, LLC does not offer?

We do not do bathtub liners.