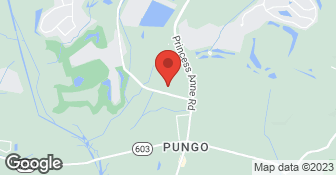 we give a military and senior discount. no deposit required...

Randy first contacted us with an estimate which we agreed on. The weather wasn't very cooperative but when we had good weather his guy came out and power washed the entire house. The painting crew arrived and did an outstanding job. They checked with us on the paint colors to ensure we were happy with it. The house looks great. His carpenter arrived and was very efficient and a master of his trade. Took care of rotten wood and when he was finished you couldn't tell it wasn't original - really amazing. Our entire experience was just wonderful and when it's time to paint the house again we will be calling Randy Overacre again! Thank you Randy and your marvelous crew! Job well done!!

Description of Work
Pressure washed the house, painted the house and shudders. Repaired damaged wood and painted it.

I would absolutely use them again in the future if need be.

Description of Work
I have used Randy Overacre for exterior painting. They painted all the trim on my house as well as three doors.

Randy OverAcre Painting Co Inc. was the only person that I got a quote from because he was highly recommended by the person who did the inspection of my house. The house is only 15 months old and it didn't need painting but the people who had lived here had painted colors which I didn't like, he used Sherwyn paints so I went to Sherwyn paints and picked out the colors that I want, he gave me a quote to paint and he went and bought the paint that I had picked. At first it was a little hard to get in touch with him because he was on vacation but once I got hold of him, he came right out and gave me an estimate right away, he was very responsive to my calls, I was very happy with his service. The person that referred me did tell me that he tended to be higher than other people but he also guaranteed that he did very good work. Randy OverAcre Painting Co Inc. did exactly what I want and he did very high quality work, and the people that worked for him were honest people and they had background checks on them so there wouldn't be weird people in the house. He used only the highest quality paint which was good. He had the job done a week before he said he would be done.

Description of Work
We recently bought a house and used Randy OverAcre Painting Co Inc. He painted the whole house except the trim.

We can do the lawn trimming and moving  …

Insured
All statements concerning insurance, licenses, and bonds are informational only, and are self-reported. Since insurance, licenses and bonds can expire and can be cancelled, homeowners should always check such information for themselves.To find more licensing information for your state, visit our Find Licensing Requirements page.
General Information
Free Estimates
Yes
Eco-Friendly Accreditations
No
Payment Options
MasterCard
Senior Discount
10%
Warranties
Yes

No, RANDY OVERACRE PAINTING CO INC does not offer a senior discount.