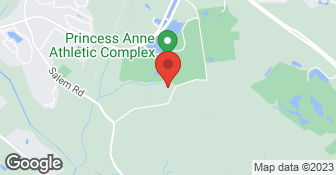 We are a full-service, Class "A" Construction Company. We come prepared to complete any job required of us, with company owned tools and equipment. The fact that we do not have to rent necessary implements, allows us to keep costs down, in order to pass the savings on to the customer. The owner is on each job, inspecting and overseeing. We can provide financing for any work we do. O'Donnell Construction has been serving Hampton Roads for 26 years. We plan on being here for you the next time you need construction work done and perform each job with the goal of making a new repeat customer, friend and referral out of each customer

I had asked thru Angies list for quotes to remove 350 sq ft of asbestos flooring and mastic on concrete. Mr. Odonnell was the best quote for the job at 650.00. He had given me the quote over the phone without coming to see the work to be done. The other quotes ranged from 100.00 to 1300.00 dollars higher. I contacted him and co-ordinated a time to meet and sign the contract, he was about 3 hours late, with very minimal updates (contact). I should have realized then I might have issues. When he looked at the floor he said the quote was for just asbestos removal and the mastic would still be there when he was finished. He informed me that his verbal quotes were for tile removal only and the floor would remain sticky when he left. We talked some and the quote went from double the price to just 300 above the quote. At the moment I thought was good because he was going to take care of it the next day, and I could move on with other work that needed to be done. The other companies were saying 1-3 weeks before they could start the project. He said his people will be over early the next day. I wasn't sure when early would be so I called him about 930 am the following morning. I was told that he hadn't heard from his people either and will get back with me. He called back and informed me his people were getting ready and will be here around noon. About 1101 one of his employees called and said they were working on another project, finishing up, and would call back about 1215 to let me know a status. At 1pm I called and left a voice message for Terry O'Donnell asking for an update as did not want to sit around house all day. About 105 his employe called and rescheduled me for 830 Saturday. Saturday at 906 a.m. I called and left a voice message on Terry O'Donnells phone saying I haven't heard from his crew. After several messages he returned my call at 1123 and after listening to me complain about him not responding timely to his messages and not hearing from his workers he said he would look into it. At 1140 I recieved a call stating that the worker I have been talking to is still working on the project that had me rescheduled from Friday. I was told that another employee would be dispatched shortly to do the work and would let me know when he would be here. I finally had to call Terry O'Donnell who was apologetic about the continious issues that I have been keeping him informed about. It was mentioned if they come today and I let them in good, if not he will be sure to have it started by noon Sunday. I mentioned haveing my days rescheduled and sitting around wasting time for two days, again he was apologetic. The employee "that would be dispatched immediatly" called at 135 Saturday afternoon, almost 2 hours after being told he would be on his way shortly, saying he will be here by 6pm because he was working on a project. I told him forget it and called Terry O'donnell, he agreed with me and said he would be here Sunday Morning before noon. Sunday Terry O'Donnell arrived as promised. In about 4 hours the work was completed satisfactorily. If it were not for the additional cost added after the quote, the promises, calls, and reschedules, and 2 days waiting because of promises not being kept. I would have had only good to say about my experience with O'Donnell Contruction.

Description of Work
I had water damage to my downstairs bedroom, bathroom and hallway. This caused some of my asbestos tile to be buckled and the floor tile to be removed. The tile was Asbestos tile on concrete using Mastic as a glue. The floor tile needed to be scraped up and removed before I have mold removed from the rooms.

We didn t have any problems concerning the work he did, it was quality work as far as we could tell. He gave us some trouble when we wanted a written statement for our taxes, and I still don't have one. I didn t like it when they said they would do something and then not do it. I don't think I would use them again or recommend them, because of that.

Description of Work
I had them repair my 1600 square feet asbestos roof and put 400 square feet of shingles on the back of the roof.

This job did not go well. During the process, the roof was not covered well and it rained causing damage to our newly remodeled office area. We had to have some repairs done since they were here. There were a couple of leaks, one around the chimney and we will have to call someone else to fix it.

Description of Work
They tore off the roof on our 3500 square foot home and put new shingles on.

O'Donnell Construction was not qualified to do work with slate roofing. They really had no idea what to do. I gave them half of the money up front and then when I realized they didn t know what to do; I refused to pay the rest. I haven't heard from them since.

Description of Work
They were suppose to repair our slate roof, put tar on the roof. They removed about 800 square foot of slate and quit.

I perform a range of maintenance duties for homeowners and businesses. We specialize in bathroom remodeling; tile, drywall, plumbing,painting, and a lot more  …

We provide anything needed on any residential building; remodel, catastrophy rehabilitation, addition or repair. We will fix your doorbell or build a new house for you; build a mother-in-law suite with built-in-pool or put a roof on your house only. Whatever you need, O'Donnell Construction can and will be happy to help you. We also, do light commercial and governmental construction.

Full-service construction for residential. That means: There is nothing outside of our scope of ability, desire or willingness to help you with on or in your home.

How is O'DONNELL CONSTRUCTION overall rated?

O'DONNELL CONSTRUCTION is currently rated 3 overall out of 5.

What days are O'DONNELL CONSTRUCTION open?

No, O'DONNELL CONSTRUCTION does not offer eco-friendly accreditations.

Are warranties offered by O'DONNELL CONSTRUCTION?

What services does O'DONNELL CONSTRUCTION offer?

O'DONNELL CONSTRUCTION offers the following services: We provide anything needed on any residential building; remodel, catastrophy rehabilitation, addition or repair. We will fix your doorbell or build a new house for you; build a mother-in-law suite with built-in-pool or put a roof on your house only. Whatever you need, O'Donnell Construction can and will be happy to help you. We also, do light commercial and governmental construction.

Are there any services O'DONNELL CONSTRUCTION does not offer?

Full-service construction for residential. That means: There is nothing outside of our scope of ability, desire or willingness to help you with on or in your home.