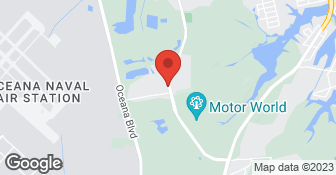 **$48 Service Call **The Most Recognized Electrician in Hampton Roads. Quality Work, Quick Response Time, Clear Communication, and Customer Satisfaction. @nipperelectric www.nipperelectric.com. At Nipper Electric Inc. we provide a wide variety of residential and commercial electrical services. With over 20 years in business, and technicians totaling 100+ years of experience. You can trust we will know how to diagnose, repair, and/or install everything involving your business or home's electrical system. On top of that, we take the extra time needed to properly explain the process, present your different options, and help you understand the services you have to choose from. All options and prices will be presented up front and broken down so you know what you are getting and what you are paying for. Simple. From Lighting Design and Install to Panel Upgrades and Whole Home Stand By Generators. Nipper Electric has you covered top to bottom for your electrical needs. All at a reasonable price. Our reviews on Angie’s List speak for themselves. Some of our commercial clients include the Cavalier Golf and Yacht Club, Rudee's on the Inlet Restaurant, and OneLife Fitness. We have 5 Star ⭐️ reviews posted throughout the internet on multiple different reputable websites all of which can be found on our website....

33% off - Ceiling Fan Installation - Labor Only…

38% off - Recessed Lights with a Dimmer Switch Installation…

DO NOT USE THIS COMPANY! We did an entire electrical rewire of our 100 year old home with Nipper. Everything started out great. They gave us a quick turnaround on an estimate and while they weren’t the lowest price their price was fair. They showed up when they said they would and we really liked all their workers. Unfortunately, 3 out of our 5 main workers ended up quitting. We were asked to pay them the remaining balance of the work because they needed the money. We understand how hard it is in the current climate to keep good workers. We didn’t hold losing workers against them. The problem is that they then totally stopped showing up. They said they were hiring more people etc and would be back soon. We would call the owner and ask him to send people and we would get 1 or 2 electricians for a couple hours when we needed a full crew for a week. The owner berated my fiancé over the phone when she demanded that they come finish the work we paid them for. We asked the owner, Trey, to come to our house and see for himself what has been done and what has not. In the 9 months that they were “working” on our house he not once set foot on our property. He claimed he knew what was happening there and he didn’t need to despite us pleading with him to do so. Finally after months of us asking them to finish we received a text from the owner saying “I’m done working on your house, sue me” We later called the city to find out if they had even pulled a permit. We found out that they did in fact pull a permit however they had failed the only 3 rough-in inspections that had been done. We are now left with an electrical job that is not even close to being finished and not close to what we paid for or signed a contract on. We now have uncompleted work, we have bad breakers that are buzzing and unsafe electrical wires hanging out of walls. We have an unsafe home that has failed city inspections. Many of the positive reviews you will read here involve workers who have quit Nipper. Again, we thought our workers were great too until they left. With an owner who says I’m done working on your house, berates women over the phone, does not do the work that was paid for and leaves a family in an unsafe home that has failed inspection…I would warn you to run as fast and far away from Nipper Electric as possible.

Matt and Ryan were excellent. In slightly over 2 hours they installed 3 fans.

Thank You [Member Name Removed]! We appreciate the opportunity to earn your business!
4.0

Work itself was good. Little bit of a difficulty getting the inspection with the city scheduled.

Description of Work
Meter box was replaced and the new box was a slightly different size. Also a number of bottom panels damaged.

Both customer service & technicians were pleasant, professional & knowledgeable. Arrived on time, wore masks & shoe covers. Determined that there was a faulty switch. Would definitely recommend Nipper Electric and use them again.

Thank you for your kind words of recommendation, at Nipper Electric we are appreciative of your business and we hope to show that throughout your time working with us. Have Great day!
5.0

We couldn’t be happier! Matt @ Nipper Electric was A+. Highly recommend and will use again. Thanks!

Exceptionally well. The problems were quickly diagnosed and remedies performed efficiently. The technician was an excellent diagnostician and highly professional. Trey once again exhibited his deep commitment to customer service. This is the 2nd time in about a month I have used this company and will definitely call upon their expertise again.

Description of Work
Diagnosis of a problem with pool-related outside outlets and switches.

Thank you [Member Name Removed] !! We are grateful for your continued business. We diagnose all types of electrical issues and try to always give you options so you have a choice in what you pay.
5.0

On time, told me what they were going to do and got it done. When one of the fans I had purchased had an issue and could not be adjusted, Matt took it down and came back the next day at no additional charge to finish the job once I exchanged the fans. Called early when they were running a bit late to keep me informed. They cleaned up all the refuse and would have taken the old fixtures, but they put them in my truck so I could take them to Habitat for Humanity. A little more than I was looking to spend, but I am sure the job was done correctly so it is worth it in the long run. I would hire them again.

They responded most expeditiously and they were able to get here within an hour and a half. For the work that they did and the time they spent here, the price was acceptable.

Description of Work
I had them fixed a lighting fixture, they almost rewired it.

Thank you for your business. Quick Response time is a key factor we want to separate us from our competitors.
5.0

AMAZING work, punctuality, and customer service. Nipper Electric went above and beyond not only speaking with us while getting our quote but with the cleanup afterward. We couldn’t be more satisfied with the job they did.

Thank you for the opportunity to earn your business. Installing new lighting is one of our favorite electrical installations. We really appreciate the kind words and look forward to working with you in the future !!
5.0

Zack and Jacob were on time, courteous and professional, and very knowledgeable. They took the time to answer questions and were effficient. The in-wall insulation posed no problems for them and the install has a neat, clean appearance. They cleaned up and asked about taking shoes off up front, which my wife appreciated. Will definitely rehire. Thanks guys!

Thank you for choosing our business !! Doing the small things like taking care of your floors and cleaning up our work area like it was before we started will hopefully ensure you have the only electrician you need for your home !!