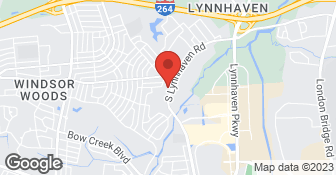 We specialize in the service of residential and commercial irrigation systems. Our technicians have been servicing Hampton Roads for more than 20 years. We have the experience to do the job correctly, and we have the ethic to do it honestly! A few years ago we added landscape lighting as an offered service. ...

Providing the Hampton Roads area with the finest In landscaping, and turf management needs. Whether you live in Chesapeake or Virginia Beach we can Beautify your lawn, landscape and home. Whether you need lawn mowing, landscape design, fescue, bermuda, zoysia or st. augustine sod, we can help. Whether you have drainage problems, standing water in the yard, more weeds than grass or a paver walkway, driveway, patio or pool deck, we can help. Annual turf management, core aeration, slit seeding, landscape renovation and more..  …

We offer quality and affordable landscaping and hardscaping services. Give us a call to schedule your free estimate.  …

Very knowledgeable and able to quickly bring back to life a sprinkler system that hadn’t been operational for years. Prices were very reasonable

Arrived on time. Knowledgeable and efficient.

Technician showed up when scheduled and completed the required work.

Hello, We're so happy you received great service. Unfortunately, we're located in Virginia Beach and serve the Hampton Roads area. I believe your kind review was meant for another company located in your area that did the work for you. Best Regards!
5.0

Project went very well despite weather-related delays. John and crew identified project needs prior to tree and concrete work. Installed protective sleeves under sidewalk and drive prior to concrete pour. Involved close coordination with the hardscape firm. Following concrete work, returned to compete repairs and new installation. Checked system and repaired a couple of leaks resulting from the extensive tree and concrete work. System works fine. Will definitely use in future.

Fantastic--the technician explained everything to me, and showed me how to do everything in case I wanted to do it on my own! I will definitely use them again!

This was the second company from Angie's list I called to repair my sprinkler the system. The first company wanted to install a start switch to control the power to the pump rather than repair the pressure switch. I told them no, that I wanted the system to work as designed (controlled by the timer). I never heard back from them. I called a second company, this time Irrigation Works. Carl, the technician (and Navy vet) came at the appointed time, diagnosed the problem as two zone valves (of six zones) leaking by, along with the pressure switch on the pump needing adjustment. Carl replaced the two faulty zone valves, a bad rotating sprinkler head and performed an adjustment on the pressure switch. He checked all the zones and made sure the system worked as designed. He had to install new valve cover box because of piping constraints on one zone valve. Carl was polite, professional, and efficient. He worked alone and it took him a bit over three hours. I had to call them back after two days when the pump started cycling again. Carl came by, found a large chunk of rust (about the size of a dime) stuck in one of the zone valves. Once removed, all was well. Now, about three weeks later, the system works like new, even though it is 20 years old. I recommend this company to anyone interested in an experienced worker doing quality work at a fair price.

They replaced a rain sensor and sprinkler heads. Does whats necessary to help me out in the yard.

Description of Work
They come out every now and then to help around the yard.

I have had Irrigation Works out three times this spring to move and/or replace sprinkler heads. They also adjusted our pump so it works better. I've used them for several years and have been very pleased with the service each time. They are very responsive and professional. Their prices are in line with the going rate in this area.

I am a steady customer of theirs. Their service has been good, and that is why I have stayed with them. They have already called me to see if I am ready to do the winterization yet, and I am not. It was about $250 to aerate the lawn and sow the grass, and it is about $50 each time they come out. I think their price is about average; it is neither cheaper nor any more expensive. I am sure there are people that are much more expensive; however, I don't have a whole lot of things to compare it to. They are very responsive. Carl Peake generally services my account, and he is very good. The quality of work is extra good, and their professionalism is perfect. They come when they say they are going to come. I would use them again in the future; in fact, I think I have got a leak in one of my pipes, so I need to call them.