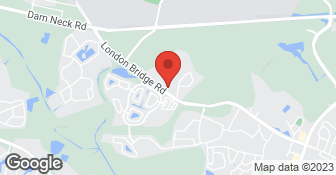 Don't pay us! No money down! Satisfaction guaranteed or your money back! Local family owned business for over 25 years, specializing in high quality vinyl replacement windows. We also offer a 90-day money back guarantee. Our master certified installers have been with us for 15-20 years. We serve the entire Hampton Roads area.  …

Preston started the work after telling me it would take him two weeks to do the whole thing. That seemed very quick to do a whole kitchen, so I was a bit skeptical about the timeline. The cabinets had to be ordered and they were a few days later than estimated, so he started on the tear-out of the cabinets that were left closer to the time they were supposed to arrive. That only took him a couple of days. Then he tiled the floor with 12 x 12 tiles and had them ready for the cabinets when they came in. He installed the cabinets and worked on the tile countertops and backsplashes. The kitchen was ready for the appliances when they were delivered. He also painted the paneling in the den (it had never been painted, so that took a few coats) and the ceilings of the den and kitchen. The few things that were snags were due to other companies not delivering on time, not Preston's fault. Also, after the first couple of days, Preston's helper had to be fired for shoddy workmanship with painting, so he found a new helper that worked out fine. Preston did most of the work himself and was very particular that it was done right and looked good. I had picked out some special tiles to put on the backsplash and they took special consideration to place. I love my new kitchen! It was only about 3 days longer than two weeks, but he tried very hard to keep to his schedule. He's very easy to work with and had good information and suggestions for me to consider. Also, he did a few extra things in my house when he had a few minutes to spare - he loves to be busy! It was well worth the money it took to get a good outcome. One other thing that occurred when he first started on the project - he noticed that the sub-floor the mold remediation company had nailed down was not also glued, as is customary. He pulled up a few boards, checked where the mold had been treated, and noticed that there was still mold under there. He treated that, then checked to make sure it had worked, and glued and nailed the sub-floor back down. If that had not been done, I would still have that problem. He only charged me for the cost of the treatment product, not the labor involved. I will definitely call on Preston to do any work that I would like done in my house. It's very hard to find anyone these days that you feel you can trust and know will do an outstanding job.

Description of Work
Preston Fillmore remodeled the kitchen in my house after mold was found under the floor. He gave me an estimate after consulting with me about the work needed and my desires. Before he came, there was a mold remediation company here to fix the mold problem. They left the kitchen with the floor torn up , a sub-floor nailed in, and parts of the cabinets torn off. Preston seemed very knowledgeable about everything that needed to be done, so I felt very confident that he would do a good job.