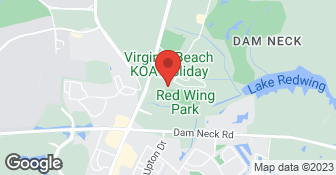 I've had several go-to painters in the past, but I recently had Donnie of D.E. Maher Painting do my exterior doors and trim. He also repaired some of the wood trim. Donnie is very meticulous, the quality of his work is outstanding, and his costs are very competitive when compared to other painters. I am beyond satisfied with his work and have no hesitations in recommending him. Needless to say, this is my new go-to guy. See the Google reviews. Photos: Before (Tan) and After (Red, Pure White)

We could not be more happy with the results! Donnie was so friendly and professional. Showed up ready to work every day, and worked tirelessly. We had our entire house painted, including the baseboards and trim. Donnie was fast and efficient. We have had 2 other professional painters do work for us in the past, and Donnie was definitely superior in quality. We would recommend him to anyone and will absolutely be using him in the future for any other paint projects.

Description of Work
Painted the entire interior of our home including baseboards, trim, and crown molding, doors, and banisters.

Hiring someone unknown to do a big job comes with a bit of keeping your fingers crossed because you never know how it's going to end. We are making over our home for the first time since we purchased it 22 years ago. We spoke to a few painters and I am so happy to have selected D.E.Maher Jr. Painting for the job to repaint the interior of our home. He did a FANTASTIC JOB! He and his crew were very professional, showed up on time and gave us very useful advise based on his experience. I could quickly tell he loves and takes pride in his job. I am not big on writing reviews but this is well deserved. I'm pleased to recommend his for your next painting project. I'm very happy to have made his acquaintance and look forward to working with him again and I will gladly recommend him to everyone that will admire the awesome job he did for us.

Still extremely happy with their service. two thumbs up!!!

Description of Work
power washed my back deck

It went great! I will call them again for future jobs.

Description of Work
I had the entire outside of my home repainted. I have a dryvet home, not easy to paint. Donnie and Tom were here every morning at 8:30 as promised and in 1 week the job was completed. I received daily updates of how the job was going and they were always willing to answer my questions. The job site was cleaned up at the end of the day and when the job was completed.

He showed up to inspect the deck and give me the estimate at the specific date and time. We agreed on a date and time for the work. He called fifteen minutes before he showed up to the power washing. He worked quickly and effectively. He told me when he would be there the following day to apply the stain. After he was done with the staining, I looked around the back yard believing I would need to pick up a scrap of paper or a bit of trash. Nothing. The only evidence that he had been here was a freshly stained back deck. I will use him again. Beyond his professional competence, he is friendly, he listens, he is personable.

Description of Work
He thoroughly power washed my back deck using a bleach/water solution removing older, flaking stain, accumulated dirt, grime, and moss build up. After allowing the deck to dry adequately, he applied the agreed brand and color of stain using a brush which eliminated any possibility of a splash on the siding.

Let me start out by saying my wife and I love the results. In fact, we are going to use them for future paint projects. But, I should start at the beginning. After a referral from another contractor, I called and spoke with the owners Debbie & Donnie of D. E. Maher Jr. Painting. They were able to come out the same day and provide an estimate. Additionally, they were able to help us decide on paint colors and schemes. Chesapeake has a lot of houses with stained wood trim that make the houses look old and dated. With Donnie's help, my house now looks more contemporary with a fresh new look. The results exceeded my expectations. Donnie and Tom (his employee) are professional painters. The trim lines are tight, the holes are filled in, and the caulk is perfect. The results speak for themselves. You can really tell the difference between a professional and novice paint job. Lastly, the cost was reasonable, the paint was a quality name brand, and their experience truly shows. My wife and I love the results. My advice is that you should hire Donnie Maher if you want a professional quality paint job at a reasonble price.

Hired to remove wallpaper, skim-coat the wall and paint. My husband called him the night before to verify that he would be skim-coating the walls, because there were many patched holes and flakes of old paint. (By the time Don came, I had already removed most of the wallpaper and plastered in the holes, so he didn't have to do that.) On Wednesday, Don did a little bit of wallpaper removal and sanding, then he primed the walls. I told him I expected skim-coating, and he said he wouldn't do that for $300. But that was our verbal agreement! So he painted (one full wall and two half-walls.) Because there was no skim-coating, the surface of the wall is uneven; you can see the outline of the old paint flakes and sunken-in patched holes. But the reason I am writing this is because last night I noticed that he had sprayed paint on my beautiful glass and stone mosaic backsplash under the windowsill! All he had to do would have been to wipe the paint off while it was still wet. Now, three days later, I am having to scratch off the dried paint with my thumbnail and a knife -- that gets it off the glass tiles, but the paint has entered the cracks of the tavertine and granite tiles, and I can't get it out. I have already spent an hour scraping, which cleaned up about 1/3 of the backsplash.

Description of Work
Hired to remove wallpaper, skim-coat the wall and paint.

This is Don, I just noticed this and I never spray primer I always roll it on and I'm confused. I have been in Business for 34 yrs and never once have I had any complaints about my work. So I'm not sure who you are cause I don't do work like that. I would not do a job for that price to remove wallpaper and prime and paint. If I did this why didn't someone call me to come back to make you satisfied?

Insured
All statements concerning insurance, licenses, and bonds are informational only, and are self-reported. Since insurance, licenses and bonds can expire and can be cancelled, homeowners should always check such information for themselves.To find more licensing information for your state, visit our Find Licensing Requirements page.
General Information
Free Estimates
Yes
Eco-Friendly Accreditations
No
Payment Options
Check
Senior Discount
10%
Warranties
Ask for Details

No, D E Maher Jr Painting does not offer a senior discount.

No, D E Maher Jr Painting does not offer warranties.

Are there any services D E Maher Jr Painting does not offer?