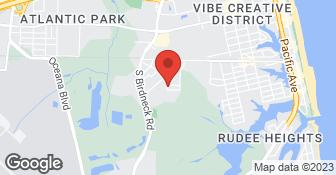 We are a full service class A contactor, We can handle all of your renovation needs being residential or commercial. We offer military and senior discounts.

Four pieces of my roof's tar shingles fell off during the height of the storm on Nov. 13, 2009. Likewise a small piece of siding which I recovered. Plus a backstop of a roof gutter was missing. I went to this website: getaquote@elocalroofers.com. I got a call from AEI on Nov. 14 Saturday. AEI sent a Dana Castorani on Nov. 15 who suggested that I pay 250.00 at once for emergency repair so as to prevent more damage to my house as I waited for the All State insurance adjuster to inspect the roof. He submitted a quotation of 1,250 with 250 payable at once and the 1000 to be collected against the insurance agency. On Nov. 17, Castroni went up to my roof where he spent about five minutes and came down. I did not hear any hammering or stapling. When he came down he asked for 250 dollars which I gave him through SunTrust personal check which has since been cashed. The next day, Nov. 18, it rained and the roof leaked and damaged the ceiling of one of the bedrooms. It is still leaking now because of the continuous rains. On Nov. 23, All State insurance adjuster David Spivey arrived and conducted a thorough inspection and made a costing of repairs including labor and material. The roof he observed was missing 4 shingles and repair of that would cost 174.00 inclusive of labor and materials. As for the ceiling that was subsequently damaged even after the "emergency repair" of AEI, he added he said making allowances for generosity he estimated the amount of 100 dollars. So in all the repairs would cost 274.00 dollars which would all apply to my deductible. He also said that contrary to the claim of the fellow from AEI, he saw no evidence of "emergency repair" or temporary patch ups anywhere on the roof. I called Castrone of AEI about this and he said he would come over. We had an appointment of 2:30 p.m but instead he came at around 6:30 p.m. all flushed red and smelling of alcohol. I told him about the costing made by the insurance adjuster and about the observation that there was no evidence of emergency repairs done on the roof. Castroni offerred to "finish" the repair for 750 dollars. I told him I am not putting anymore money after bad but he insisted that I should pay 50 per cent of the contracted amount of 1,250 dollars and threatened to sue me for backing out on the contract. The roof is still leaking now because of the continuous rains since Nov. 13 and even after the "emergency repair" by Dana Castroni of AEI.

Description of Work
AEI was supposed to perform "emergency repair" of my roof to stop the leaking. Then after the insurance adjuster arrives to make a determination of compensation, they will complete the job.

In business since 1997, Cavalier Enterprises is a Class A Licensed State Contractor and perform both interior and exterior work throughout Virginia. We offer FREE estimates for remodeling projects and 30% - 50% discount for Angie's list customers and guarantee lowest pricing. We will do commercial & residential projects, have many references, and pride ourselves on professionalism in the industry.  …

Arnold Enterprises Inc is currently rated 1 overall out of 5.

No, Arnold Enterprises Inc does not offer eco-friendly accreditations.