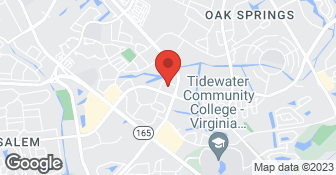 I am a Christian based complete remodeling business, we do all our work ourselves and have 30 years experience. We are quality driven perfectionists, who will complete your project with expert craftsmanship. We take cash, check and credit cards. Free estimates available. 15% off entire bill for a limited time

We have hired Matt multiple times over the last two years. He installed a new shower for us two years ago. He fixed our garbage disposal, patched our ceiling and replaced our front door a year ago. He recently installed a new AC unit. Matt and his team are wonderful to work with. They are prompt, trustworthy and communicate clearly. We are grateful to have a company we can trust to call when we need help. We recommend Adams remodeling and repair!

Originally he came he told us he is going to have 3 people, he showed up with 2 people for 1 day. Due to some issues, he's been coming here with just 1 guy. he's been rushing the job so he can go do another job. Because he's been rushing the job, the window in the master bedroom, the window is 1 inch off set, the water damaged from the window damaged the floor, he then repaired the floor but the floor is not level. The master bedroom vanity is not installed yet. Everything he's done is in process of. He layed the master bedroom sink bowl against the bed post and scratched and damaged it. He found an electrical problem along the window and he said that water damaged had cause the cable box to deteriorate and he charged my wife $325 to repair it. What really upset me is I spent over 3K on the cabinets and his helper dragged the stuff on the floor and damaged the cabinets. My wife noticed that one of the cabinet was broke in the corner during the installation and he did not tell us. We had to find out by expecting the house on the day that he did not come. On the cabinet itself, he was trying to attached it and instead of drilling the screw on the side of the cabinet, he was trying to drill on the top and cracked it. He had an electrician to come in here to install outlets and the electrician cut the holes in the wrong place and he said the electrician is going to repair the holes, but the electrician said he is not going to repair the holes. Where he installed the cabinet, we have popcorn ceiling, he said he didn't know we had pop corn ceiling and the popcorn was interfering with the trim being installed. So my wife scrape the ceiling in order for him to install the trim top.We had trim behind the refrigerator when the contractor layed the floor, he did not replaced the old trim, he left it empty. The trim on the door is not against the old trim evenly. There's a gap between the old trim and the new trim. When he replaced the flooring, we had some wood laminate and he did not run the laminate all the way to the wall. He was supposed to repair my shed door, and his helper lost some hardware. I had purchased new latches, and he used the new hardware where he lost the old hardware and did not tell me. I've had to sweep my driveway because I've found nails, screws everywhere. I have found a lot of debris along the driveway and the backyard. Also they made cement on my lawn and left cement on my yard. He also broke one of the dove tail corner on our kitchen island. The job is not completed and we are not satisfied!

Contractor originally bid $1600 and then gave a senior discount. He arrived at the house on Sunday May 8, Mother's Day to reassess the job. He said he could not do the job with only one sheet of PVC Board, that it cost $100 per sheet, and that he would need 3 sheets of PVC to complete the job of replacing 11 returns. He then suggested that I purchase the PVC boards myself. I told him I believed all 8 larger returns could be cut from one board. He told me work would begin on Tuesday. A contractor, not Matt Adams, showed up on Wednesday and began painting. Thursday he began cutting the returns from one single sheet of PVC 4x8 board. He was able to cut all returns from the one board and had a nice piece left over. Clearly this gentleman was an experienced builder. He, did in fact have his own company and had been hired by Adams to do the job. He had not been told that painting the half rounds was part of the job. He also had not been told to cut chair rails for the pillars. He knew only about one 5" piece. He did do the garage door and house door frame repairs. I had given Matt Adams a 50% downpayment a week prior to the start of the job and payment for the remaining 50% was due at completion. He came to the house on Saturday morning and wanted payment. I told him that the little pieces of molding (2) still needed to be replaced on the one pillar. His comment was "really? do I really have to take you to court over this?" Next statement was that he would have all the work pulled down. I never said I was not going to pay, only that the job had not been completed. He seemed to believe he was not making money on the job. I told him I would pay the balance via credit card. He then stated he did not take credit. I had paid the down payment via check and despite his advertisments stating he accepts cash, check or credit, he stated it costs him money to accept credit and did not take credit. If that is so state it at the beginning of the transaction and do not advertise that you accept credit. Also his original bid came with several things omitted. I sent 3 emails to him stating the bid was incomplete and why. Later he sent an amended bid - still leaving off a couple of items. Later he said the half rounds were never discussed and only 4" of chair rail was included in his bid when 4 sections on two pillars were in need of replacement because they were rotted. Matt Adams tends to get into personal space. In talking with him I repeatedly had to back away.

I couldn't be more pleased with Adams Remodel & Repair. The house looks brand new again after power washing the driveway and walkway, and replacement of the old outdoor lights; the floor squeak is finally gone; the side fence is no longer listing to one side; the doors beneath the jetted tub look wonderful and the cats can't open them any more to crawl under the tub; and -best of all - the old DirectTV dish/pole (which has been inactive and an eyesore for 16 years) is finally gone! There's nothing I've asked Matt Adams to do that he can't handle. He always cleans up the work site. Today Matt is next door power washing my neighbors house because he liked the job Matt did on my house. If I need anymore work done on thls house, Matt Adams is the person I'll call.

I was super impressed by how quickly he responded to my request for an estimate, sent me a proposal within hours, and started the job within days. His estimate was more than half that of the first person I contacted. There doesn't seem to be anything he can't do. Several times he's surprised me by coming up with solutions that I either didn't think of or didn't know about (like the ball closures for the doors in the FROG). While recarpeting the master bedroom closet, he uncovered an air vent that the builder had carpeted over, so I'm putting a vent in there. He explains available options to me, like whether to go with sheet vinyl or tiles, which one he recommends, and why. I'm very big on why. He's like the energizer bunny. I've never seen such a hard worker. I wish I'd found him earlier - I would have had a lot of the repairs made ages ago, but I didn't know who to hire. The more work he does on the house, the more things I think of that I'd like to have done. I love the repairs he's made to my house so much that I'm going to delay putting it on the market until next Spring so I can enjoy them.

Description of Work
I've been in my house for 18 years and needed to get it ready to sell. After trying two other contractors, my real estate agent referred me to Matt Adams. Within a day after I contacted him to get an estimate, he came by, saw what needed to be done, sent me a Proposal via email within hours, and started work within two days. Here are some of the things that he's done so far: replaced yellowing vinyl flooring in a 12' x 16' sun room with vinyl tiles (my choice), installed nifty ball closures in two doors that were always blowing open under eaves in the FROG, nailed down soffit over the front porch that the original builder had neglected to do, repaired and replaced house siding as needed, removed and replaced padding and carpet in master bedroom and closet & installed a wood threshold strip between that room and the hall - looks terrific, replaced several squares of yellowing vinyl flooring in kitchen, repaired crack in grout in garage foundation, relocated the hinges on a door to the garage that was not closing properly and could allow bugs to get past the weather stripping and into the house, recaulked the outside of all windows and doors, cleaned and inspected my gas logs, and repaired window screens where a neighbor's cat had jumped up on them to see my cats. Everything he has done has met or exceeded my expectations.

Established in December of 2020, we specialize in various types of extetior cleanings for both residential and commercial projects. There's no job too big or too small we won't do. Estimates are always at no charge, and are custom built to meet the need. Call us today, we aim to please. "Bada Boom, Bada Bing! look, it's clean! Forget about it!" The Boss  …

Adams Remodel & Repair is currently rated 4 overall out of 5.

No, Adams Remodel & Repair does not offer warranties.