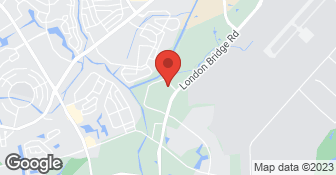 Absolute Moving Company has been in business in the Hampton Roads area since 1988....

Jeff was very friendly but said he doesn't do out of state moves since he doesn't have a motor carrier registration.

Description of Work
Move from VA to MN

Short notice move, from apartment in Norfolk to Va Beach. Jeff was able to make it happen. Day of the move, Greg and Zack arrived on time, introduced themselves, surveyed the items to be moved and got started. Went real quick, one and a half hours after they arrived, they were leaving me in my new apartment. Quick, efficient service, they wrapped both TV's and handled everything with care. My new apartment manager was glad I was using Absolute Moving, she said she uses them for her own moving projects. Would use them again and recommend them for your moving needs. Michael M.

It went extremely well. The movers took extra precautions to make sure none of our high-end furniture was damaged and made sure that everything was to our liking. At the end they wanted us to walk through and make sure that everything got done and that we didn’t forget anything so all in all it was probably one of the best moving experiences I’ve ever had!

Absolute moving were wonderful!!! They were prompt and courteous. They made sure that I was satisfied with the placements of my furniture. They even placed the boxes in the closets. I would definitely hire them again.

Left a message, received a call back from Jeff within about 45-60 mins. Very pleasant, let me know they don't go out of state and gave me a recommendation of another company to try. Please note, the only reason I say "wouldn't hire again" is because I am moving out of state.

Description of Work
Move from VA to NC

I asked for movers to shrink/plastic wrap my brand new bedroom set before and during the move. On the day of the move, the movers refused. They claimed they were never notified to do this and would not when I asked. I even purchased the plastic wrap but they had their own. They brought the plastic inside but would not wrap anything. They then left the plastic wrap behind. The pieces of the bedroom set were scratched/gouged and scraped against doorways. The broke a leg on the bed and they did not tell me. The movers rested my mattress and base on the ground several times claiming they were heavy (unwrapped). My mattress and base were stained due to this. One of the workers claimed Jeff would send someone out to clean it and to provide an estimate on the damage but that never happened. Myself and another person with me asked one of the movers if he was training, because the other mover was trying to explain to him what to do with the furniture. The worker replied "I don't work for the company, I work at the shipyard, I'm just making some extra money this weekend." The owner, Jeff, had me pay for the move upfront while scheduling in order to receive a receipt the day of the move. I did not receive the receipt that day. He claimed it was missing and somehow mailed it 6 months later but it was too late by then. The receipt was needed in order for me to be reimbursed by my employer for the move. Immediately after, I constantly contacted Jeff through calls and texts to rectify the situation but he ignored my attempts to reach him. I was charged $1400 for them to move one queen sized bedroom set and several boxes only. For that price, I expected professional movers. Jeff refused to work with me to get this justified. He said he would give me 0.60 per pound of the furniture damaged. However, they never weighed any furniture. He sent me a check for $200.00. I obtained the actual weight for each piece from the manufacturer and at 0.60 per pound, he actually owes me more than twice the $200.00 he mailed. DO NOT USE THIS COMPANY!!!! Try Harrison's Moving and Storage.

Description of Work
Moving of one bedroom set about 2 1/2 hours away.

Dear [Member Name Removed], We asked you several times to provide an estimate of repairs for dry cleaning. You did not provide me any, nor did you get back to us in a reasonable time. You tried to cancel your credit card on us and were playing games. You did not perform the criteria that we asked, furthermore, you are not being reasonable and fair to this company with your "F" slam. We tried to get you to do the right thing and provide us a written quote, I can't help that you failed to perform. In the end, we agreed to give you .60 per pound per item, which is what our contract states. The problem was a stained mattress and boxspring weighing about 150lbs. We cut you a check for $200.00 which equates to 330 lbs. We more than compensated you for the stains and we were happy to do it, but you continue to post bad reviews almost 1 year later. You just posted a review on 1-20-2018 to slam us. You can't bully people into giving you more than the situation warrants.
3.0

They emailed requesting a date that would be good for an in-home estimate. I replied with date and time and never heard back from them.

Description of Work
Requested a quote for a local move.

Hi [Member Name Removed], I called to schedule an estimate, remember...I told you "I live on [Member Information Removed] also". We live in the same neighborhood and had a conversation about it. You never got back to me to schedule the estimate...so, how am I supposed to feel when you post an inaccurate review? Rick
5.0

The four-man crew arrived right on time and got to work immediately. I believe the crew leader's name was Matt and he was fantastic as were all of the guys working with him. They started with all of the boxes on the second floor and moved quickly loading the truck. This was by far the smoothest move we have had. No furniture was damaged and everything went great. I would recommend this company to anyone. The price was never changed from what I was quoted when Jeff came over to give us our initial estimate.

Description of Work
This was a full four-bedroom house move. We had packed the house but the movers disassembled and assembled the larger pieces for us.

Hi [Member Name Removed], Thanks for the review... Rick

Innovative Waste is a family operated locally owned junk removal business located in Virginia Beach, VA. Do you have any items you’d like removed from your home, yard, or garage? If so, Innovative Waste offers residential and commercial services. We come to your home or business and take anything that no longer serves you.  …

Full-service junk removal with same day service throughout Hampton Roads. Locally owned and operated. If you have junk, we will haul it away for you. No job is too big or too small. We are committed to protecting the environment so we keep as much out of the landfill as we can. We recycle, upcycle and donate the things that we haul away. Licensed and Insured.  …

Priority Landscaping and Beyond

Hi my name is Tom Dycus I've been doing landscaping for about 20 years. I can see it's my passion and I want to show the community what I can do and what I have learn from our companies out here today.. I do lawn mower, clean ups, designing flowerbeds, mulching, feeding and seeding, pruning/trimming and soon to be waterproofing and irrigation  …

ABSOLUTE MOVING COMPANY is currently rated 4.6 overall out of 5.

No, ABSOLUTE MOVING COMPANY does not offer eco-friendly accreditations.

No, ABSOLUTE MOVING COMPANY does not offer a senior discount.

No, ABSOLUTE MOVING COMPANY does not offer warranties.