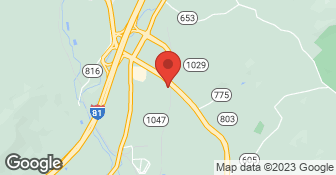 We are a full service basement, crawl space and foundation repair contractor. Rated A+ by the Better Business Bureau we have repaired over 40,000 homes and structures in Virginia, West Virginia, Tennessee, and North Carolina over the past 40 years. We are fully insured and licensed. Angie's List members receive a free consultation and inspection. We have worked in all types of locations, including residential and commercial locations, government agencies, colleges, hospitals, churches, and condo associations. We provide a lifetime transferable warranty, carry a Class A Contractor's License and we're fully insured....

My name Larry Hairston I run a small landscaping company in the new river valley for 7 years we are a small hometown company. We do Lawncare and landscaping we fill that we provide some of the best service around we are just a father son team that are just trying to make a good livin we dont believe that quality work should have a quality price please call us and I promise u wont regret it.  …

Appointment made, no one showed up. Called to inquire about the missed appointment with no return call.

Description of Work
Review of basement and estimates for work that may be needed.

Should be called "Steal-tite". Company came out to give estimate in MAY 2019. Said they couldn't do the job until December, but we weren't having any leaks by June, so we went ahead and signed contract, sent in $800 deposit. Well, we ended up buying another house and decided not to have the work done. This was about October. Tried to call Seal-tite several times, always get the "answering service" and they never call back. Finally found the card of the engineer who quoted our estimate, Curt Giantonio. He said too bad so sad for our deposit, and that we had no recourse to get the money back. I realize the contract said the deposit was non-refundable. But the company could have been courteous, understood the situation, and refund my deposit even though legally they don't have to. Instead they've chosen to keep my money for zero services rendered. I could understand them keeping a portion to cover the travel costs of the engineer who came on site to give the estimate, but there's no way that is anywhere near $800. Greedy company that obviously doesn't care about people.

The crew arrived on the date/time promised. They were polite, professional, and worked non-stop (except for 2 short breaks and lunch). Because of my landscaping, the crew determined the best way to get to the bottom of the foundation was to dig a hole—24” x 8’. It was truly impressive—perfectly squared off. They sealed the wall, replaced the dirt, and replaced decorative stone. They then installed a 50’ French drain—trenching, refilling the trench, and removing excess debris. The crew worked as a team, did a top-notch job, and left the job sites better than they found them. It took them 4 days—and they never wavered from an extraordinary work ethic. That was last week. This week? We’ve had torrential downpours and flooding—but my basement and garage are dry. I’d hire them again in a heartbeat.

Perfect -- extremely professional, so very clean and tidy work, took less time than we originally thought it would. 10-year warranty on the repair.

Three men arrived on time they were courteous professional and worked hard! My only suggestion, prior to leaving the premises when the job is completed meet with the customer to see if they have any questions. I had to remind them when they were getting ready to leave I needed to pay them for their services! Would I hire them again you bet. Hard workers!

Thank you for your review and input. We try to become better in any way we can. So glad you were satisfied with our work!
5.0

It went really well. They did everything just the way they said they would. They came on time, worked very hard, cleaned up after themselves very well. Everything was done neatly. They even hosed down the driveway when they finished since it had sand, stones and a bit of mess from the concrete mixing, etc. Some of the guys smoked outside in our yard when they took breaks but, they didn't even leave one cigarette butt. They were very respectful and hard working. They finished the job on time--actually a day earlier than we thought.

Did not use just checking about service/reviews

Description of Work
Did not have work done checking reviews

The process of them putting in a sump-pump system in my basement getting water seepage went pretty well. It took them a long time to get to me because, from what I understand, they stay pretty busy. I was initially told my job wouldn't get done until February 29, 2016 but they then had an opening on December 23, 2015 and they came in and jack-hammered around the perimeter of my basement, where the water was coming in, and installed the piping, sump-pump and reservoir. Initially I was told it would be a one day job but as it happened, they had to come back later to finish up. The first day they did do everything except bury the outlet pipe outside and then re-cementing over where they had dug up my basement to install the piping. For about a week I did have a gravel filled trench in my basement but at least I didn't spend Christmas shop-vacuuming up water like I had been doing. They came back on December 30, 2015 for about half a day and finished up the job. I thought the people at Seal-Tite were very nice to deal with. Initially their estimate was over $3,000.00 but they gave me a little discount for having to reschedule my initial assessment and quote in November and they also honored their Angie's list coupon. The important thing, the water has stopped flowing into my basement which ruined my carpet which I had removed by another contractor. I now have the task of picking out new carpeting, getting the new cement sealed, etc., which will be handled by someone else. So far, everything they did seems to be working ok. If you do hire them, be sure to give them a deposit so you can be put on their short list in case they have a cancellation. It saved me two months of waiting time for them to get to me on their schedule. I did give them a "B" on their Responsiveness since they did take a while to get to me but it seems a lot of people these days are having water problems in their basements and crawlspaces so I can't "diss" them too much on that one. They did show up to do the job on time on both days which with contractors these days, from my experience, is a miracle.

Description of Work
Seal-Tite installed a sump pump system in my basement.

This company was a pleasure to work with. The estimator came out twice because after several repair businesses visits, I had additional questions. I felt like the estimator listened to my concerns and was honest about the best way to fix our foundation leaks. Workmen arrived at the date and time scheduled. I was leery about their arrival time since the company is not in Northern Virginia. They worked hard throughout the day in the cold of December and completed the task as planned. One crack was repaired inside because of electrical concerns but this had been explained to me earlier. Last week ( Oct. 2015) during our 7 to 10 inches of rain four days I found no leaks in our foundation. :)

Description of Work
Dug openings outside our home along foundation cracks where water was seeping into the the interior of the home.

We didn't hear from the company.

Description of Work
Emailed me back that they would contact me but didn't follow up in the next 3 weeks.