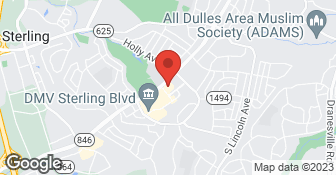 we repair and install all types of roofing, guttering, siding, windows and doors, exterior and interior painting and powerwashing deck repair staining and building also provide heating and ac repairs and small electrical repairs and installations...

This involved a lot of work, Larry brought in different crews for each job. Everything was completed fast (in a little over a week) and very professionally. The workmanship and attention to detail was great. The crews did a nice and efficient job and left our house as clean as before they started. Larry came out himself after each job was completed to check the quality. The resulting work looks very good - all in all a great job!

Description of Work
Replaced shingle moldings, installed vented soffits, finished trim facia and rake boards, replaced the gutters and power-washed the sidings. This was done all the way around our house.

After a recent storm, I had a number of shingles missing from my roof and a piece of siding torn off. I called all the place trying to find someone that could come and fix these things urgently but everyone I called was booked solid due to the storm for MONTHS out. Larry, not only returned my call immediately, but he said that even though he was also booked solid, he would do whatever he could to work me into the schedule when he was in my neighborhood. Low and behold, a few days later he was able to come to my house and get the work done. Not only that, he did an amazing job repairing the shingles and siding plus a few areas that had gone unnoticed. His estimate and invoice were more than reasonable and he was a great communicator. I would recommend Larry without hesitation!

Perfect. He was able to match our existing shingles despite them being discontinued.

Description of Work
Had roof repair done after wind damage

Larry was replacing missing tiles on my neighbors roof after severe wind and noticed I had missing tiles. He tried to contact me the same day, but I was unavailable. I contacted Larry through Angie's List and he immediately responded to my inquiry. He is reasonably priced and very accommodating; he was great to work with. My roof is over 20 years old and I will use Larry Doyle Roofing & Remodeling when I replace it.

Description of Work
Larry replaced missing tiles on my roof

Larry did a great job at a great price. It was done so well that we had even higher winds a few weeks later and a different section of our roof lost shingles and we had him back to repair it as well. Both repairs were great!!

Description of Work
Due to extremely strong winds in our area, we lost some shingles off the roof over our garage. Our shingles are not available everywhere and Larry was in the neighborhood repairing another house when he saw our damage. He stopped and offered to repair it since he had purchased more shingles than the first job would need. He replaced the missing sections for us quickly and efficiently and at a great cost.

Description of Work
I contacted Larry to clean my gutter in August 2013. He did a good job. His price was reasonable. While performing the job, he commented the caulking on my windows were old and cracked, he went a head and noted the color of the exterior so that if I choose to caulk the windows he'd have matching color. I told him not right now, but I would probably in a few mos. I then asked how much would he charged me, he said around $300. I decided to call Larry back in October to have the job done. I asked him again what the estimate would be, and he said about $450. I asked what about the $300 he quoted me, he said he doesn't remember that and it wouldn't be any where near that because he has employees to pay, and that when it rains he and his employees can't work so they lose profit, he went on and on about excuses one after another. I got tired of hearing about his excuses. | |I still went ahead and agreed to him re-caulking my windows. After the job was done, he gave me a $480 bill and I paid him. I wasn't home at the time, but when I saw the quality, it was very poor. I could have done it my self. First off, he never removed the old caulk, he just caulk the new stuff over the old ones. And then there were spots missing, I had to call him up and have him come out to do the spot where his crew missed. Not only that, but the quality of caulk that he used didn't seem like it was made for exterior use, some spot cracked within the first week! I never called Larry back to fix the issue because I'm just so disappointed in his service, price and product. I'm not sure if he could do any better the 2nd time around, or rather 3rd. The one thing I regretted the most was agreeing to an outrageous price of $480 for 3 people do a half a** caulking job that I could easily pay someone to do it for half the price and double the caulk quality. Needless to say, it was a lesson learned for me.

the customer failed to mention that we were called earlier to repair his gutter at that time we fixed additional items on his roof everything went smoothly and I recommended doing the caulking while we were there to save him he wasn't ready so the return trip was additional also the cost of caulking was in addition to labor maybe he forgot every house requires a different amount in addition there were three different colors needed of caulking he is absolutely wrong about the price our time and gas to pick up special colors is included I doubt there is anyone charging less lastly the customer was thrilled when we fixed his gutter and roof on the first trip what happened? also while there he requested us to give an estimate on replacing some patio doors if he wasn't happy why did he ask for additional prices we do outstanding siding and window work and no one has ever complained about price we are normally the best price around I am at a loss to understand why the customer loved us on the first trip called many times to have us out again then asked for additional work
5.0

I was initially skeptical about Larry Doyle Roofing & Remodeling as the company had no reviews on AngiesList. Larry (the owner) told me that most of his work comes from referrals and he doesn't spend any money on building a big online presence. I talked to a couple of his customers and they all were singing praises about the work that was done. I have a decorative dormer on the roof with some rotting wood. I took quotes from about 6 different companies and they all gave me quotes ranging from $600 to $1500. All the quotes said that I had to cover the wood with PVC so that I dont have this problem again in the future. The other companies said that they will only cover up the damaged part of the dormer with PVC. Larry said that he would replace the rotten wood and cover all the wooden parts of the dormer with PVC so that I don't have to worry about getting the dormer painted/serviced for a long time. He also said that he offers a lifetime warranty on all work performed. All the other companies I talked to only offered limited warranty ranging from a couple of months to 2 years. Apart from the dormer issue I also had a gutter that wasn't sloped correctly. And I had bird nests in the kitchen & dryer vents. Larry said he can reslope the gutter, clear the bird nests and install pest barricades over 4 vents for no additional charge (I bought the barricades from HomeDepot). I am pretty happy with the work that has been done and would highly recommend him. I am definitely going to use Larry Doyle Roofing & Remodeling (roofinggutter.com) for any future work.

Description of Work
Fixed dormer on the roof, added pest barricades to dryer and bathroom vents

thanks we enjoyed working on the project larry
5.0

Description of Work
Performed repair and fixed issues, the other company wanted to replace the entire gutter system.

Our company is based on the belief that our customers' needs and satisfaction are the most important goals to meet after completion of each project. Our entire team is committed to meet those needs. As a result, a high percentage of our business is from repeat customers and referrals. Owner: J. Miguel Ore, with over 20 years of experience as a painter. Donna's Painting, LLC. was established with a vision to offer exceptional painting services. I believe in offering professional thoroughness, efficiency, reliability, promptness, and courteousness service will help my company grow. I am always looking to establishing long term relationships with my clients. My staff understand that customer satisfaction is our number one priority. If you’re not completely satisfied we will make things right for you! We would welcome the opportunity to earn your trust and deliver you the best service in the industry.  …

Larry Doyle Roofing & Remodeling is currently rated 4.8 overall out of 5.

No, Larry Doyle Roofing & Remodeling does not offer a senior discount.

Are there any services Larry Doyle Roofing & Remodeling does not offer?