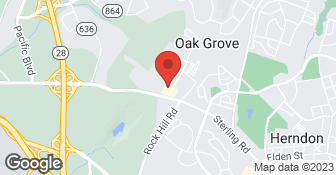 For over 20 years, Kiddco Plumbing has been one of the premiere Northern Virginia plumbers serving the residential and commercial plumbing needs of Northern Virginia. We have become one of the industry leaders in commercial and residential plumbing in Loudoun County, Fairfax County, Fauquier County, Prince William County and the surrounding area by providing unsurpassed plumbing services to homeowners and businesses. Our plumbers have the training, experience and equipment to get the job done right....

Relax Air is a fully insured and licensed heating and air conditioning firm in Ashburn, Virginia, composed of Master Technicians led by Kamal. He and his team provide round-the-clock emergency services for residential and commercial customers, including those in the Iranian, Arabic, and Palestinian communities. With more than 25 years of experience in providing air conditioning services, Kamal takes pride in making customers feel good about his company. He does this by giving them quality and honest services at great prices. His services are approved and recommended by the Loudoun County Fire Department.  …

I needed to replace the valves on our sink faucets in our condo since they wouldn't shut off. Unfortunately to do this we have to turn off water to our entire building and the property management company requires a plumber to restart the recirculating pumps and they recommended Kiddco. I figured since they had to come out to turn the water on and of I would have them go ahead and replace the valve...

The technician was Andy, he has a trainee named Thomas, Andy was just wonderfull he cut out the bad pipe & replaced it with a good CPVC Pipe.

Description of Work
They had to repair a leak in ceiling, it was pipe leak

I called at 10:45pm and Corey called me back within 5-10 minutes. He was jovial and professional and arrived within 45 minutes. He was able to assess the problem and quickly stop any additional damage done by the water and fix the drilled through pipe. I am so glad we found Kiddco and they were ready to help us at a very reasonable price!

Very good. Both times the work was done quickly and professionally. The tech. explained all about my new hot water heater. Both times he cleaned up after himself. He explained what I needed to know and got to work.

I initially worked with Terry at Kiddco and that was a pleasant experience. I had just purchased a condo in an old building and the water main is not to each unit - rather one main to all units in 3 buildings. All was appropriate scheduled a week from our call. On the day of kitchen cabinet removal, a contractor mishap occurred and we needed an emergency shutoff. Paul came out as quickly as he cou...

Called them Thursday expecting to be given appointment several days later. Explained that gas HWH was leaking over my deck into the lawn. Not as urgent as an internal leak. But they offered to come the next morning. By morning I had no hot water and was desperate. The single Kiddco rep arrived, very polite, and ready to work. Discussed problem with failed, aging 14-year natural gas HWH, gave recom...

We thought they were very professional, we thought it was a good price.

Description of Work
They put in main water shut off valve and put in reserve/expansion tank that sits above the water heater. They checked a drain and a sink that was running slowly.

I called after hours for emergency service. A very nice representative took the main info very efficiently, and said someone would call me back shortly. Corey from Kiddco called back within 15 minutes, told me up front without me asking how much the emergency pricing rates would be and said he could be there in an hour. He arrived within the hour, fixed the issue within the first 30 minutes, makin...

Description of Work
Emergency after hours repair on a toilet where the water valve to the tank would not shut off.

We had a late night problem with a shower (the water would not turn off). Called Kiddco and talked to their answering service. We received a return call in about 10 minutes. After a short discussion to determine the nature of the problem, the technician said he would be at our house in about 40 minutes. Andy arrived within that time frame, and proceeded to fix, and explain, the problem in short or...

I had a punch list of items to fix for the closing on the sale on my rental property. I called Kiddco Plumbing, and Dan answered the phone. He helped me understand what was being requested to be done. Dan scheduled for a technician to come to the rental property on a specific day (it was a rental property, so it had to be a specific day) and fixed the items. Andy was the technician and he fixed ev...

Description of Work
I had a punch list of items to fix for the closing on the sale of my rental property. Kiddco plumbing helped me understand what was being requested on the punch list (Dan answered the phone, and was great!) and they performed many tasks (fixed bathtub and dishwasher drain hose), and did so reasonably and for a great price.