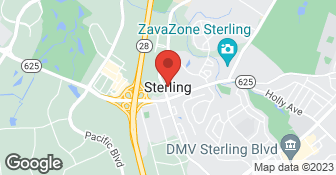 All managers hold a degree in Horticulture, Landscape Architecture or are Landscape Certified Managers We employ a fully legal and highly trained workforce who show up in uniforms and clean, marked vehicles....

Envirogrow Lawn & Landscape is a full service residential and commercial maintenance company serving the Northern Virginia Area. We have been in business for over twenty years. Envirogrow is fully insured and has a Class A Virginia Contractors License. Our crews are uniformed, well trained and each crew is overseen by an English speaking supervisor. Chemical and pesticide applicators are certified by the state of Virginia. The office staff is courteous and responsive to a client’s needs. We perform all levels of maintenance from a simple weekly or biweekly lawn mowing to full service twelve month turnkey maintenance plans. Landscape enhancements, new plantings and annual flowers are an integral part of our service business.  …

Josh has been terrific. He is very responsive and easy to work with. We have just finalized the plans. We will be working on pricing and then will proceed with the project. Angie's List wanted a review even though the project has not even started which is very annoying. There is no way to indicate that we are not finished. Is this something you can add to your email notifications. I will update this when it's completed.

Description of Work
We are having a deck replace with a patio and a retaining wall.

They're extremely good. They were expensive but very very good. They do it weekly for me. They've also done major projects too. They took care of the beds too but that's not really the hard ones to get it going. They're very good at diagnosing problems and treating them. They don't just mow. They look at what they were doing.

They are a very good reliable company. I would highly recommend them. They come with a truck it is whole operation.

Description of Work
We use Kane Landscapes for the lawn. We have used them for at least 15 years. They come weekly. They mow, weed and do everything. I have a contract with them.

Kane did all work required in a professional manner and was available for any corrective needs. highly recommend and plan to use for future projects.

Description of Work
This is a one year update on work that Kane did originally in May 2013. Kane absolutely lived up to its guarantee, with professional and ease. Continue to highly recommend company for landscaping and drainage issues. Dealing with company by email is fast and easy; highly responsive. Project managers are checking on site periodically, on an unscheduled basis to ensure that all is well.

I have been extremely impressed by the professionalism by Kane Landscapes. When I initially hired them to re-landscape my yard they came to provide a completive quote with photos, and CAD drawings, which were reviewed with me in person. The designer explained all of the plants and what would be best for our yard (given the deer). She also made several modifications based on my budget (with new walkway, new leveling, and other landscaping options) along with a detailed breakout of the cost so that I could easily see what fit in my budget and select based on that. Kane even staked a tree that was planted by another provider the year prior that was starting to lean. The work was done according to plan and they even were able to accommodate my request to get on the schedule earlier as we were having guests over and we wanted to have the yard look nice. About 6 months later, one of the trees they planted started to lose all its leave so I contacted Kane to come take a look. Joe came out and assessed everything, applied some food, and said he'd come back to check everything after winter. Early in the Spring I Kane come out to give us a quote for a Spring cleanup. It was competitive but we had to pass as we had plans to put in a French Drain and it wasn't in our budget to do both the cleanup/mulching and french drain. I told Joe of this and that is why we wouldn't be using them for the Spring cleanup. Joe asked if he could also quote for the job for the French Drain since this was something they worked on (I wasn't aware of). While he came out to quote us het said the tree needed to be replaced. Joe provided a better solution for our drainage issue at a lower cost and we hired them to do the job. The workers are all very professional - they are very meticulous and cleaned up the job. They were on site for over 8 hours and were working very hard. They laid new mulch over any areas they worked on. When installing the french drain they accidentally damaged one of our sprinkler heads (the landscaper came to us and told us, along with the site manager) and Joe came out to fix the issue. A week after the drain was installed we had a large rainfall. Joe came out again, on his own, to check and see how things were going. He came to the conclusion that some things could be modified and had his crew come back (no charge) to fix some items. He also replaced the tree and another shrub that was planted a year prior as it was not thriving. All in all, Kane has visited my house over 6 or 7 occasions for two separate jobs. The work they have provided was completive and met my requirements/budget. The managers/designers along with the landscapers were all very professional and very responsive. I have been extremely happy with the work they have provided and will continue to recommend them to others.

Description of Work
I hired Kane in 2013 to re-landscape my yard. In 2014 I had them return to do a french drain.

[Member name removed], Thank you so much for the kind words. We truly appreciate them. We are glad your project went well.
5.0

I was absolutely thrilled with their competence and the work they did. The price was steep so I bailed for 2014 and already regret my decision after the FIRST visit by the new company I picked. Update: That is a real understatement. I HATE the landscaping company I picked and have no idea why they get good ratings on Angie's List. Maybe they take care of commercial properties but they are doing a terrible job on my house. I am trying to get out of my contract and will surely lose money even if I can. I will write this off to my having made a really bad call. I have changed the previous "C" rating for cost to an "A" for this reason. ____________________________ I am saving $1,000 but I am certain that everything will stall during this year. I will gladly pay the additional price next year--you get what you pay for. Kane landscapes many properties in my neighborhood and has done some of them for years and years. These properties could be in House Beautiful--the lawns look like lush, green carpets. I doubt mine will ever look like that because the previous owner did NOTHING to take care of the lawn (an exaggeration in terms). But it will get better. I never felt like I had to look out the window to see what Kane was doing and how well they were doing it. Not so with the company I am using this year. My backyard has a steep downhill slope into a FFX park which is a site for occasional litter. I never asked Kane workers to pick up litter. They did this automatically. I asked the head of the new crew (2014) to do that for me with a piece of trash and he acted put out. (I'm not too picky--the backyard/view from my living room "makes" my house and trash is quite visible. Otherwise it wouldn't matter. Even as I look at it now, there is an old plastic flower pot down there.) UPDATE: The mowing this year is erratic as is the mow height. My yard looks like it has gotten a bad haircut every time. Weeds are jumping up in my front yard and the man who I signed the contract with told me to buy a can of Round Up. I have two cats. Round Up kills grass as well as weeds and is harmful to pets. Kane weeds with each mowing--these people don't. The crew doing the spring clean-up for my house this year took HOURS, much of which was spent talking, leaning against the truck, wasting time, etc. You will never see Kane's workers doing that. No breaks--they do their work and move on. You will be very pleased with Kane.

Description of Work
SEE UPDATE IN NEXT SECTION TO REVIEW WRITTEN EARLIER IN 2014. Kane Landscapes revived a mordant property that I bought in 2012. The credentials of the employees can be seen on their website. The management and the workers are professional, fast, dependable, capable and well-trained. The excellent credentials can be seen on their website: www.kanelandscapes.com . You can expect to get newsletters, your bills online, and interesting seasonal information on the website.

[member name removed], Thank you for the kind words and we are always happy to start taking care of the lawn again if things do not work out with the new company. We wish you wonderful spring and a great 2014 season.
5.0

They are absolutely wonderful. Their customer service is outstanding, they are very responsive. Anytime we call with questions or do an additional project. The people that come to do the weekly mowing are very courteous and do an excellent job. I think their pricing is very fair considering the outstanding service. They are on par in pricing with everyone else but the customer service is better.

Great experience. Had two meetings with landscaper designer. Agreed to plans and price. Signed contract. Immediately heard from project supervisor to schedule work. Very responsive. Excellent communication during entire project from initial contact to completion. In addition to availability by phone and in person, both designer and project supervisor communicated by email. I was always aware of status or planned activities. Work started when they said it would and was completed on time. Crew was exceptional. Arrived at 8am and worked til 5:30 and two evenings until 6:30 and 7:30pm. Overall, three-person crew was at my home for 4.5 days. Cleaned up each evening. Very flexible during project regarding small items. Did more than than expected when they weeded bed along driveway that was not part of project. Work was performed to my expectations and beyond. I can not imagine being happier with project and would HIGHLY recommend Kane to others. I will use them again. Great work, reliable staff, and excellent communications. Designer and project supervisor and I were all on email regarding entire project. Often emails came in late at night regarding plans for next day. These guys were working!

Description of Work
Corrected drainage problems on 1/3 acre lot. Two 40+ foot drains installed along with river swale. Layed sod, mulched and planted shrubs. Work was done in yard with pool so all hand digging in order to protect pool pipes. Removed bamboo around pool equipment and put in root barrier and pavers and river rock.

The maintenance is different from the projects. Their price is reasonable. They are very responsive and professional. They do high-quality work; they do really good work. Their management teams are all very well-trained in landscaping architecture and horticulture.

Description of Work
I use the services of Kane Landscapes Inc. for landscaping and yard maintenance.

We have had them for 25 years. They are very reliable and show and do their job.

Description of Work
They do lawn mowing for us.