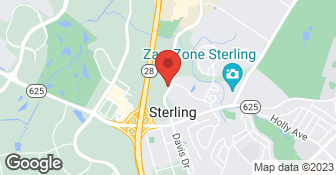 American Smart Moving Services provides complimentary consultations for professional residential and commercial moves. Based in Ashburn, VA, we are proud Loudoun County taxpayers and serve the Virginia, Maryland, and DC tri-state area. Our specialty is to ensure you have the best quality protection of property and possessions for your move. Blankets, plastic wrap, and tape are on us! Floor and door or railing protection are part of our standard service!...

Are you ready for the best moving experience ever??? Well you have found the right company that makes customer satisfaction their first priority. We are experienced movers ready to help people relocate in Virginia, Maryland and D.C. We provide full service moves as well as partial movers. hourly rates includes packing and unpacking, loading and unloading, disassembly and reassembly of furniture if needed and protecting your household items with quilted moving pads / strech wrap and handle them with care, and best of all we offer the lowest hourly and flat rates in the area, we also offer same & next day delivery and hauling, we are available everyday of the week including holidays and last minute bookings at no additional charge, we have many references and referrals because of our outstanding customer satisfaction. Please contact us for more information at 703-901-6096. Thank you  …

Alex and his crew did a phenomenal job moving us from a 4th floor apartment with no elevator into our new home (15 minutes away). They arrived on time. They were cautious with our items. The crew moved us from one home to another in just over 5 hours. We were very pleased with their services.

I used Alex and his crew to move a few items from my house, including a treadmill and some boxes from my garage. They charged me for three men hourly. The cost was fair for the work being done; however, when they tried to remove the treadmill from the first floor out the front door, there was some damage done to the hardwood floors because no form of protection was put down underneath (towels, blankets, rugs, etc.). The damage was small, but I took some photos and sent an e-mail to Alex on June 20 to let him know what had happened and to see what could be done to either fix it or compensate me for the damage. He responded right away and assured me that they would do everything they could to remedy the issue. A couple days later they asked when I would be available to have a contractor come see the damage. I gave him my availability, but he didn't respond until a week later (now June 28). When he did respond, he said he was hoping to get a contractor to come see me either Saturday or Sunday. I gave him my availability for those two days (very flexible) that same day. When I didn't hear back for four days, I sent him another e-mail (July 2) to make sure everything was okay. He informed me it was a busy weekend and he was still trying to set things up. I thanked him for keeping me informed (July 4). On July 10 I asked him if he had heard anything from the contractor. He didn't respond. I asked again via e-mail on July 12. Still no response. I have literally heard nothing from them since then. I had also called at some point in the past month (the move occurred June 19, it is now July 19). When he answered the phone he was friendly and professional. When I explained who I was and why I was calling, he became very rude and said he was too busy to handle my issue right then. I asked him to please call me back when he was available because I needed this issue fixed. He never called back. If the contractor had come out and communication had been continued by Alex, I'd have probably rated this company a 4. I understand that damages occur. However, I feel that this situation was handled extremely unprofessionally, and I feel very cheated. I would not recommend using them. I have used other moving companies who have damaged furniture or the house, and they have handled it in a much more professional manner. This is not at all what I would have expected from a moving company. If you want a worry-free experience, I would suggest you look elsewhere.

Description of Work
I needed some items moved from my garage and first floor.