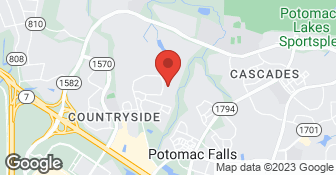 We have used Alex for 20 years and are never disappointed. The quality of his work is excellent. His team is careful and it is easy to have them working in the house.

They are a little expensive but they do outstanding work! They are able to schedule you in advance and they are always on time. When painting, they pay very close attention to detail and cleaned up after themselves. Even a real estate agent who looked at the house after the job was completed was very impressed!

Description of Work
They painted my house! I had ceilings painted one shade of white the walls painted beige or cream colored.

Standard house painting. Mostly brick and siding, only window trim and doors needed to be painted. Price was probably reasonable (I usually think EVERYBODY is overpriced). A few months after their paint job I noticed that an area on my front door which previously had a brass "kick plate" had not been properly sanded prior to painting. I contacted them by email requesting that they repaint the door. NO REPLY! After several weeks and numerous emails Judit replied explaining that they had been having email problems and she had just received "all of my email." She seemed sincerely sorry for the delay and advised that Alex would be in touch with me about repainting my door. It's now 3 years later (seems to me like I've been VERY patient!) and Alex has yet to return. 6 weeks ago I decided to just repaint the door myself. After 20 minute of hand sanding I decided to contact Alex Painting AGAIN and see if they would honor their original promise to repaint my door? Judit explained that this was "their busy season and that they might not be able to get to my small job until next week." That seemed reasonable to me ... when they still had not managed to fit me into their schedule after 3 weeks I emailed Judit again, NO REPLY. 10 days ago Judit emailed me inquiring about my schedule, suggesting that maybe Alex could complete my small job on his way home from work last week? Late Friday, Judit emailed asking if Alex could stop by Saturday morning? I explained that I planned to be away from the house until 1030am and asked if we could make an 11am appointment ... NO REPLY. Late Saturday afternoon Judit emailed explaining that they were now having work van troubles (but they never gave me the courtesy of calling to say they wouldn't be there at 11am, so I was there) and could we please reschedule for this week. I explained that I no longer wanted Alex Painting to work on my home as I've been waiting 3 years for too many excuses to count. I asked if this was a real painting company? This week, at my request, they sent me a check for 4 hours labor. I'm sure I'll be able to find a company that will actually show up.

Description of Work
Good quality work at reasonable price compared to other estimates that I received. Owner was responsive to my many questions about paint quality, surface preparations, painting late in the season.

Description of Work
Alex Painting was fantastic! Very personal (and personable!) service, with hands-onanagenent to make sure that the job went right. My new go-to painter!

A few false starts while scheduling the start date, but once started, took them 2 days to finish everything. They moved all the furniture to the middle of the room (we did what we could to move away some of the small stuff), covered everything with drop cloths and did a great job.

They were excellent. They were quick, responsive and over all great.

Description of Work
They painted the exterior of my house and fixed some wood rot.

They do what they say they are going to do and the quality of their work is good. They clean up very well after themselves. I have probably used them four times in the last couple or years or so. I have been happy with the work they have done and they also did paint the whole exterior of our house on another occasion. They also did some painting for our next door neighbor.

Description of Work
They painted a kitchen and two guest bedrooms in our house.

Good. Neat and complete. Did a complete walk-through at the end and didn't ask for payment until the job was done.

is a locally owned and operated business which has helped keep Loudoun County and surround areas colorful and beautiful for many years. We are painting contractors for both residential and commercial customers. We consistently deliver the highest quality services at very competitive prices, working with honesty, integrity, and always with a smile. We ensure expert craftsmanship at affordable pricing, and this is something that differentiates us from our competitors. We value our customers and ensure optimum satisfaction for them: Using only high quality painting materials blended with our most innovative techniques and styles. Kris' Painting Service Inc. can give your home or business a fresh, new, innovative, fashionable and sophisticated look. We use the finest products and materials to insure that we maintain your real estate investment to highest degree possible. Experience a new level of quality and customer service with Kris' Painting Service Inc.  …

Looking a professional company that does great work? Look no more, with over 16 years of drywall and painting experience, we guarantee that you will fall in love with your next project. We pride ourselves on the quality of our work as well as our commitment to outstanding results. We look forward to building long-term relationships with our clients and guarantee your satisfaction!  …

ALEX PAINTING LLC is currently rated 4.8 overall out of 5.

No, ALEX PAINTING LLC does not offer a senior discount.