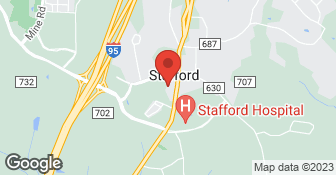 We Can Provide for All Your Garage Door Needs! We service the following Counties: STAFFORD, FREDERICKSBURG, SPOTSYLVANIA, PRINCE WILLIAM, ALEXANDRIA, MANASSAS, MANASSAS PARK, KING GEORGE When you are in need of a reliable solution for your troublesome garage door, you are in need of a skilled garage door contractor. Excel Doors, LLC can help. Our family-owned and operated company has been providing the Stafford and greater Woodbrige, VA area with quality garage door solutions for seven years. We have more than 15 years of experience in the garage door industry and can handle new installations, repairs or replacements. Come to us for a simple repair or have us handle your custom high-lift conversion. No matter what you need, we guarantee we will be able to find a solution! Get in touch with Excel Doors, LLC to learn more....

Would highly recommend Excel Doors. Yesterday was New Years Day and I was in a panic - I hit my garage door opener but it wouldn't open. After a quick inspection, the top of the door split in a way that even if I disengage the tractor mechanism, I would be unable to manually lift the door. My car was trapped inside the garage and we had a big trip to leave for. I used to use Affordable Garage Door out of Stafford but none of their numbers worked so I called Everett using the emergency number. He called back in 5 minutes and was enormously helpful and reassuring. He gave me a window of between 10:00-12:00 the next day. He showed up at 10:00. There were multiple options - one being to install a new top panel - but it would have cost $400 for the panel alone. He ended up finding a way to use an angle bracket force the two split pieces together and it was far less expensive. The facts that he took part of his New Year's Day to talk to me, that he was so responsive, that he found the option that made him the least amount of money, and that he was so friendly has made me an instant loyal customer. Whenever I work with a company like this where the subject matter is outside of my sphere of competence, I'm always nervous as to whether the solution is really the right fit (and that I'm not getting sold or charged for things I don't need). I feel Everett showed his character today and it makes me happy to give him my recommendation.

No wonder this company got the Service Award! They responded within hours to my message, told me the likely cost, which was very reasonable, and scheduled an appointment for the next day. The repair tech arrived promptly and got straight to work. He was polite and professional and was able to complete the repair quickly and efficiently. He explained what had likely caused the problem and how to try to avoid it in the future. I only wish more companies operated as well as Excel Doors!

Excel Doors LLC was called this morning to replace broken spring. They arrived early and had me up and running in no time. This company is professional, friendly, and informative. If you need work done this is the company to call. Highly recommended. A+++++++++

I contacted 3 garage door companies to come by and provide an estimate to repair a damaged garage door. Two out of 3 returned my calls and came by to provide an estimate to repair the door. The second company's estimate was twice the cost of the first. However, both companies brought up similar problems with the door and also areas to update the doors. I was impressed with the professionalism of both companies but went with the less expensive one because they responded with a quote within 2 days (versus one week) and seemed especially astute of the problem associated with fixing an insulated garage door. I've placed a deposit, awaiting for the replacement panel and glass window to come in and then will schedule the actual installation in a couple of week.s

Was able to schedule appointment for next day, first thing in the morning. The technician (Everett) arrived very early in the appointment window, gave me repair recommendation and estimate, and did the repair in a short time, Everett was very professional and clean up everything. Very satisfied with work, Would hire them again, and I do recommend them!

Excellent service. Technician (Everett) arrived within an hour of my phone call to company. He was knowledgeable and replaced our broken spring. Highly recommend

Everett was Excellent. He arrived prior to the expected arrival time, quickly identified and repaired the garage door and serviced/adjusted both doors. I found Everett to be a personable, knowledgeable, professional individual who was very efficient in repairing and servicing both garage doors.

A+ contractor. I was given an appointment for the day following the day I called. Everett, the technician, arrived within the appointment window and quickly diagnosed the problem. He was friendly and professional. He also gave me a brief tutorial on maintaining and lubricating the door. There was the $85 service fee but the work was minor and included in the price. We added two remotes at $50 a piece. Very pleased with customer service. Would use again.

Description of Work
Evaluation and repair of garage door/opener that kept getting stuck.

Last month (October), I was home alone and likely a little paranoid so I decided to engage the manual lock on my garage door. Naturally, I accidentally hit the button to open it while it was still engaged and the lock got stuck in place. Without thinking I pulled the door down and there was a loud pop...the arm that attached to the wall and held the chain that pulled the door...detached from the wall. After a mild panic, that this would cost hundreds to fix I called Excel Doors and they were able to come out the same day. They said it would be an $85 fee for the diagnostic visit and based on my description of the issue that would probably be all I'd have to pay for the repair. The poor repair guy had actually drive through a park to get on my street because the road crew ran into a poll and blocked all access to my house. Luckily, he ended up parking right in front of my driveway. He checked out the damage and said he could fix it for the $85 fee. It was a simple repair to reattach the arm back to the wall and the garage door has been working normally ever since. The guy who came out was nice and professional as were the people on the phone. They gave me I think a 2-hr block of time where he would arrive and even with the roadblock he arrived within the time period quoted. There wasn't any kind of upsell, the only advice he gave was not to use the manual lock unless there's a power outage. Lesson learned! Photos: One where you see the two screws hanging the bar touching the spring is the BEFORE pic.

Description of Work
I needed the bar that holds the pulling mechanism reattached to the wall of the garage.

After the mother-in-law accidentally drove her car into one of our garage doors (she was fine), it was obvious it was time to replace the garage doors which were showing signs of wood rot anyway. Conspiracy theorists would argue that my wife encouraged her mom to drive into one of the doors so that it would spur me to get both doors replaced. If so, it worked. Did a little research and booked an appointment with Excel Doors, who sent out an estimator. He was right on time, professional, answered all my questions and left some written literature for me to peruse. The estimate came via email later that day and was in the range I expected. Made an appointment for installation after paying 10% down for the job. The original appointment was postponed by Excel after they called and asked if I could reschedule. They had wanted to send two technicians for the job, and one of them had become unavailable. I was fine with it and appreciated the proactive communication and advance notice. It actually worked out better for me and the installation date was pushed back only 3 days. Two technicians showed up exactly on time and set to work. They did a great job with the installation and cleanup. Total time to replace everything was 4 ½ hours. Very pleased with the results. The new doors and motors are smooth and quiet. Feels like I have a whole new garage!

A1 garage door has been providing fast, friendly family services in your neighborhood for years. While maintaining our humble family ideals, our company has grown to service both commercial and residential markets with no job too small or large for us. A1 Garage Door is a full line garage door company operated by specially trained, certified and uniformed technicians. We specialize in providing quality garage door services such as sales, full installations and repairs. It is our aim to bring you the best customer service possible accompanied by very reasonable prices. We are located in Alexandria Virginia but we currently only provide services to Stafford, Woodbridge, Fredericksburg, Culpeper, Chantilly and Manassas and its neighboring Northern Virginian areas, Maryland & Washington DC. Additional phone - (571) 572-5420.  …

Excel Doors LLC is currently rated 5 overall out of 5.

No, Excel Doors LLC does not offer eco-friendly accreditations.